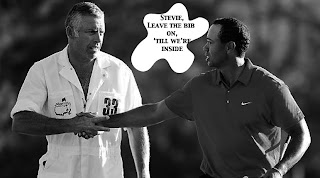 When Tiger Woods was at his predatory best – golf that is! – his caddy Steve Williams was reputed to have been – based on percentage earnings from a rampant Woods – New Zealand’s highest paid sportsman.

In general terms the relationship between a professional golfer and his bagman is a peculiar one in sport, lodged somewhere in the grey area between expediency and camaraderie, between the physical and the metaphysical.

Steve Williams, a professional caddy since his teens, an accomplished golfer in his own right as well as a national saloon-car racing champion, is a tetchy ‘bugger-the-generals’ antipodean who is highly protective of both his employer – dare I say master – as well as his own place in the scheme of things.

This egocentric perspective however seems to have resulted in an increasingly irritating behavioural quirk.

In recent years it has become almost comical to watch William’s theatrics whenever he and Woods reach the final 18th hole of any tournament. While Woods is surveying his next shot Williams is often to be seen rushing across the green – and television screens – to lay down the bag and then quickly divest himself of the ‘bib’ that identifies caddies in most of the important tournaments. Williams then tends to saunter back on to the green proper to watch the final shots being played out ready, it would appear to this onlooker, for the ‘high fives’, as a fellow ‘player’ rather than as a mere ‘bagman’.

The theatrics appear to be becoming more pronounced and were most obvious last weekend at the conclusion of the Tiger Woods hosted Chevron World Golf Challenge in California. There on the final 18th hole in regular play Williams rushed to disrobe then hovered – sans-bib – only for Graeme McDowell to sink a twenty-foot putt and send them to an extra hole. On had to go the bib again and off they trouped back to the first play-off hole where McDowell triumphed over master Woods in front of a ‘bib’ adorned and flag-holding Williams.

Williams behavioural oddity has been occasionally commented-on in online golf forums with a divided opinion between whether he is ensuring that some of his own sponsorship logos – such as that for Valvoline who obviously support his car-racing efforts – are seen or his expressed psychological need not to be seen as a mere bagman, in bondage to the arcane rules, bibs and pecking-order of the professional game.

I suspect it is something simpler or more basic than that. I would guess that five or six years ago at some PGA tournament or other Williams probably went about divesting himself of his bib before the players had left the final green and that this early disrobing had earned him a rebuke from one of the many officious ‘golfing major-generals’ that populate the final green of most tournaments. Not to be messed with by a ‘blinkered’ attitude that in another lifetime sent thousands of Australians and New Zealanders to die on the beaches of Gallipoli, Williams abreacted and determined that he would ‘stuff them.’

This ‘abreaction’ response I would have no problem with identifying with, having being brought up at a time when ‘golf’ was reserved for a very exclusive section of society who then created an ‘off-course’ etiquette which perpetuated that exclusion. It is something that I have also railed against, particularly when it is so arbitary in its application, but I do feel that the theatrical energy involved by Williams to make his ‘protest’ is becoming an irritant and could perhaps be better or more subtly employed.

Golf is a fantastic sport and now thankfully enjoyed throughout the world by men and women from right across the socio-economic ‘divide’. It also is one of the only sports where a refereeing of self, is paramount to how the game should be played and if you play in that spirit, put in all your score-cards you get the handicap you deserve. The attached ‘non-scoring’ rules governing things like dress code, behaviour on course and club-house etiquette become an impediment when they are applied without common-sense.

Golf as a professional sport has also provided an opportunity for many men and women to earn a living from the game and this includes the bagmen. Williams over-sensitive perspective will become a problem unless addressed by himself.

Bibs, latex or not, do not mean bondage.