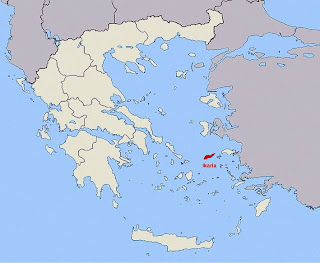 Rihla (The Journey) – was the short title of a 14th Century (1355 CE) book written in Fez by the Islamic legal scholar Ibn Jazayy al-Kalbi of Granada who recorded and then transcribed the dictated travelogue of the Tangerian, Ibn Battuta. The book’s full title was A Gift to Those who Contemplate the Wonders of Cities and the Marvels of Travelling and somehow the title of Ibn Jazayy's book captures the ethos of many of the city and country journeys I have been lucky to take in past years.
This one is about Ikaria Island, Greece.
There are moments in the life of every family when two individual members of that family share a ‘positive’ journey (leaving aside perhaps childbirth) which is exclusive to them from the remainder of the family members and which imprints a ‘good’ memory that perhaps becomes defining to that particular relationship. If there are instances when this happens or re-happens, many years apart, then it is not unusual for those instances to be linked in some way, thereby creating a geographic, temporal, spiritual or philosophical déjà vu reinforcement of that shared experience. So it was for me at least, my youngest daughter Nicole, and the island of Ikaria in the eastern Aegean. 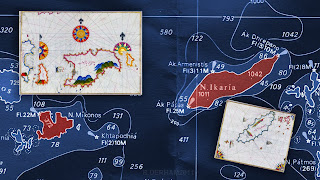 Map insets by Piri Reis, Ottoman cartographer.
About 9 years ago I made arrangements for a family trip to Mykonos and Delos but had also wanted to see Ikaria, a large island to the east of these. The very notion of Ikaria fascinated me. Politically a place with a long history of centrifugal and centripetal exile; a backwater island that had been controlled in turn by Miletan, Persian, Athenian, Byzantine, Genovese, Knights of St. John, and Ottoman interests and which briefly proclaimed an independent Free State on July 18, 1912 until becoming part of Greece. Ikaria a societal island which was noted in medical literature for the longevity of its people, radio-active thermal spas and the rarity of senile dementia in the population, and in general literature for its hospitality, its panegyria festivals, and wild goats (rhaska). It was also the mythological birthplace of Dionysus (on Mt Pramnos), the Greek god of Wine. Just the place I needed to unwind.
Landing in the small airstrip on the north-east of the island we first climbed and then descended to the small port of Armenistis on the northern coast through magical and surprising forests of pine, cedar, fir and holm oak on what must be most tortuous and sometimes precipitous corniche in the whole of Greece.
My daughters, recent survivors from the stress of university exams, groaned at every bend in the road and later that evening at the apparent lack of ‘happening’ on the island. Within a day or so, however, the island’s essence had captured them and we all recuperated in the warm sunshine, lazy days, great home-brewed wine and early nights. I spent many of those beautiful mornings on Ikaria walking to places like the village of Razes in the hills, the ruins of the Temple of Tavropolus Artemida near Nas on the coast before returning to swim, and bask and trying to re-read (yet again!) James Joyce’s Ulysses.
After an idyllic restful week in the Ikarian backwater we left for what is the maelstrom that is Mykonos. Boarding and departing the ferry about 1am on a still, balmy night the lights in Ikaria appeared to go out behind us. At the back of the boat I was left alone, mesmerised by the phosphorous wake that fermented astern when Nicole joined me. Together we watched the most star-filled northern sky I had ever seen and talked, and talked, about nothing and everything, without restraint.
As a father it was a magical ‘mini-journey’ and I remembered it fondly when two years ago a joint authorship academic article written by Nicole and myself on the responsibility and regulation of Expert Witnesses at the International Criminal Court was accepted for publication. 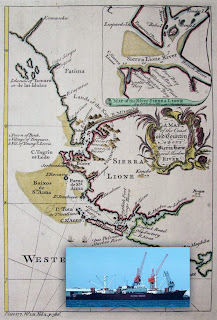 The MV Ikarian Reefer and Sherbro Island, Sierra Leone
A very important development in establishing the responsibilities and duties of expert witnesses in civil law – and which subsequently were adopted in criminal law – was made by a Mr Justice Sir Peter Cresswell in the Ikarian Reefer trial in the UK in 1993. Reefers are refrigerated ships, which plied their trade transporting perishable goods in the main. The Ikarian Reefer had been built and launched at the Euskalduna yard in Bilbao Spain on Aug 9, 1967. 134.3 metres long it was named Plenica from 1968-1972 and with change of ownership Iberian Reefer from 72-79 and ultimately Ikarian Reefer from 1979. It ended it days scuttled and on fire on another island, Sherbro off the Coast of Sierra Leone. The subsequent maritime insurance case and the frustrating delays caused by the examination of conflicting expert witnesses resulted in Justice Cresswell’s elaboration of the duties of an expert witness, duties that run to the core of what guidance is available to expert witnesses in law today. He stated that:
The duties and responsibilities of expert witnesses in civil cases include the following:
1. Expert evidence presented to the Court should be, and should be seen to be, the independent product of the expert uninfluenced as to form or content by the exigencies of litigation.
2. An expert witness should provide independent assistance to the Court by way of objective unbiased opinion in relation to matters within his expertise. An expert witness in the High Court should never assume the role of an advocate.
3. An expert witness should state the facts or assumption upon which his opinion is based. He should not omit to consider material facts which could detract from his concluded opinion.
4. An expert witness should make it clear when a particular question or issue falls outside his expertise.
5. If an expert’s opinion is not properly researched because he considers that insufficient data is available, then this must be stated with an indication that the opinion is no more than a provisional one. In cases where an expert witness who has prepared a report could not assert that the report contained the truth, the whole truth and nothing but the truth without some qualification, that qualification should be stated in the report.
6. If, after exchange of reports, an expert witness changes his view on a material matter having read the other side’s expert’s report or for any other reason such change of view should be communicated (through legal representatives) to the other side without delay and when appropriate to the Court.
7. Where expert evidence refers to photographs, plans, calculations, analyses, measurements, survey reports or other similar documents, these must be provided to the opposite party at the same time as the exchange of reports.
‘History is a nightmare from which I am trying to awake.’
So said Stephen Dedalus in an argument with the schoolmaster Deasy in Chapter 2 of Ulysses and reading it in Ikaria struck me as being entirely appropriate. Stephen Dedalus who in character was Joyce’s own literary alter ego within the book’s structure and who in Joyce’s choice of his surname intentionally alluded to Daedalus, the master artifacer who designed and built the Labyrinth (aka Joyce’s Dublin) for King Minos in Crete. Daedulus (he the one with the partridge tattoo) subsequently designed and built wings for his son Icarius and himself to escape the labyrinth but Icarius flew to close to the sun and the wax binding the feathers melted and he crashed to his death on the island that now bears his name.
Ikaria has a long history of marginal existence, from which as Stephen Dedalus would have it, it is trying to escape. The Free State established in June 1912 was only to exist until November 4, 1912 when Greek troops occupied it and the signing of a formal treaty of accession in June 1913. The interesting aspect to all of this is that this treaty (I have not been able to track down documentary evidence of the treaty) is apparently due to expire in 2012 and I wonder whether Ikarians, given the financial mess that Greece is in, will declare their independence again of Greece, the EU and IMF/Eurozone shackles.
I am certain there are Expert Witnesses out there willing to testify! 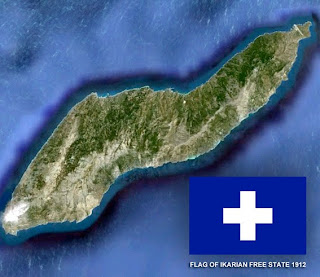