Ireland’s Financial Crisis – Blame it on the Tea! 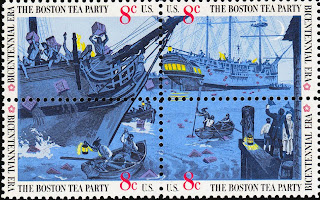 In recent years Ireland’s descent from being the palatine economic whizzkid of Europe to that of a junkyard bailout orphan has been precipitate and much of the blame has been attributed to lack of regulation and an over-reliance on an inflated value of property. I disagree somewhat and place much of the causation on our consumption of tea!
Let me explain this reasoning!
In the early 1900s my great-grandfather Hugh Coyle was a tea merchant in Georges Street, Limerick. His son David, my maternal grandfather established a similar operation in the 1930s at 50 Corporation Lane, Dublin and at the onset of the Second World War was Chairman of the Wholesale Tea Dealers Association of Ireland. At the outbreak of the war, Ireland had the third highest per capita consumption of tea in the world, importing about 11,000,000 kilos per year, most of it sourced at London’s tea market at Mincing (from the Anglo-Saxon for nun: minicen) Lane.
In wartime 1939 the UK Ministry of Food took control of the tea trade and appointed a Director of Tea. Rationing was introduced and the allocation of tea available for neutral Ireland dropped to about 25% of normal, or 0.5oz (0.014kg) per capita, by 1941. As a consequence a ‘Tea War’ with echoes of the ‘Tea & Taxation Wars’ that had precipitated the 1776 American War of Independence was declared by Sean Lemass, the Irish Minister for Supplies. He established a number of companies, backed by Government financial guarantees, to source and procure scarce and essential commodities. Thus Tea Importers (Eire) Ltd. came into being with my grandfather being first Chairman and one of four Directors (a fifth was added in 1947). The first shipment of tea (859 chests) to arrive under an Irish flag was on the LEDA (later renamed the Irish Elm) on the 31 August 1941 from warehouse stores in Montreal, Canada. The company was deemed to have been very successful in carrying out its wartime remit. 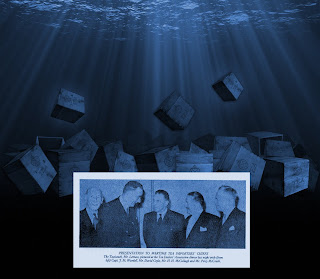 After the war, in 1947, Tea Importers (Eire) ltd changed their name to Tea Importers Ltd but continued to function as a non-profit tea importing monopoly. By 1958 the Government was anxious to remove itself from the guarantees it provided and it enacted the Tea (Purchase & Import) Act of 1958. This in effect allowed what now became Tea Importers (1958) Ltd to be a stand-alone commercial entity with an expanded membership open to all merchants. Not all tea merchants in Ireland however agreed to join the new company. Peter Barry of Barry’s Tea in Cork was a notable absentee, objecting to the company’s overseas agent buying in bulk, and the tea arriving in Ireland untested. He felt there was no substitute for a proper tea merchant tasting the product at source.
Tea Importers (1958) Ltd although required to buy tea in the country of origin still controlled the shipping monopoly. It also began providing credit and financing facilities for its members, as well as raising money on the London bond markets at cheaper rates than that available in Ireland. Because of this activity it established a separate finance subsidiary, Enterprise Investment Co. Ltd. in 1962. This subsidiary with the advice of the Swiss Banking Corp, applied for and were granted a Bankers Licence by the Irish Central Bank in 1963.
My grandfather David Coyle died in 1967 after an association of 26 years with the two companies.
In September 1973, because of pressure on its monopoly status being brought to bear by Ireland’s accession to the EU, the name of the company was changed by Special Resolution from Tea Importers (1958) Ltd to Irish Bank of Commerce Ltd and a subsidiary company Tea Importers Ltd was established to carry on the import and tea agency transactions. IBC’s banking licence, was renewed by the new Central Bank Act of 1971 on condition, as far as I can make out, that it was not allowed to advertise its financial services publically. It continued to serve the tea trade primarily but only had a small deposit base and when a Mr Sean FitzPatrick joined it as an accountant in 1974 it only had four employees.
In 1978 or 1979 the Irish Bank of Commerce, finally left the control of the tea merchants and became a subsidiary of the City of Dublin Bank, a small merchant bank established in 1964, and run by Gerry Murphy. IBC appears then to have been used as a vehicle to purchase another small Dublin bank Anglo Irish (or Little Anglo) Bank. Sean FitzPatrick was put in charge of Anglo Irish and a little later the joint entity formally was incorporated as Anglo Irish Banking Corporation (big Anglo) in 1986 with Gerry Murphy as Chairman, Sean FitzPatrick as CEO and another IBC employee, Tiernan O’Mahony as a senior executive.
Anglo Irish Bank Corp’s expansion proceeded from there in an exponential and fantastical fashion, completely under-resourced and overvalued, resulting eventually in the Irish Banking Crisis and the skinning of the Celtic Tiger. Most of IBC’s assets were hived off to Credit Lyonnais along the way but its goldmine of a banking licence, and the tea leaf reading hopes of the merchants of 1962, was formally transferred to Anglo Irish Bank Corp. on the 23 June 1997.
Thereafter the lack of regulatory control of the amalgamation of small Dublin merchant banks in the 70s appears to have created the permissive personal and corporate atmosphere where the acquisition of small marginal banks and financial institutions, became a game, a fairground of distorting mirrors where the entity was actually less than its component parts. As a reward to their unbridled hubris the same bankers then created yet another fairground in the property sector in which to play the game.
Anglo Irish Bank Corp ceased to exist after its amalgamation with the Irish Nationwide Building Society was renamed the Irish Bank Resolution Corporation Ltd. in June 2011. Its liabilities guaranteed by a similar government guarantee granted to the Tea Importers (Eire) Ltd of 1941 and which will remain a millstone around all our necks for generations to come. I wonder what has become of that Tea Importers (1958) Ltd./ Bank of Commerce banking license.
The Irish tea trade also changed in the same time period, and saw the amalgamation and then failure of many of the wholesale merchants. Coyle Tea established by my grandfather David merged with two others to form Allied Tea Blenders but after only a few more years trading went into liquidation. Tea Importers Ltd. was wound up on the 13 June 1986, its war finally ending in defeat. 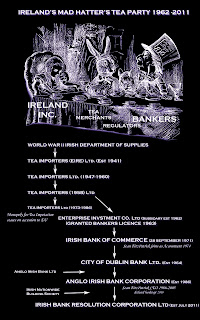