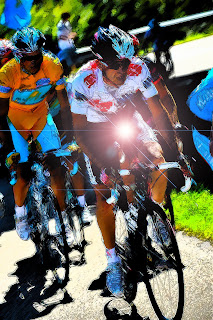 In a week that the US Attorney’s office announced they were closing its investigation into seven-time Tour de France winner Lance Armstrong’s alleged performance-enhancing drug-use his successor as cycling’s superstar, Alberto Contador has been stripped of his 2010 Tour de France win and been given a two-year ban by the Court of Arbitration for Sport.
As I mentioned in my blog of July 22, 2010 (Counter-Narratives and the Col du Tourmalet) the physical ‘achievement’ of the winner-takes-all contest between Andy Schleck and Contador on that hot summer’s day high in the Pyrenees exceeded all acceptable physiological parameters and yet for all that it was riveting because it was a contest.
Between ‘beef suppliers’ yes, but a contest all the same!
Sometimes you wonder whether there is any real difference between Contator’s behaviour and a concert pianist taking a cardiac beta-blocker to ensure that the most nuanced of concertos is achieved without tremble, or Tiger Woods or Picasso having sex to better strokes, or Brendan Behan drinking just to exist.
None really! It's about intent.
Posted by Roger Derham at Tuesday, February 07, 2012