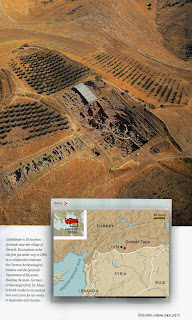 Rihla (The Journey) – was the short title of a 14th Century (1355 CE) book written in Fez by the Islamic legal scholar Ibn Jazayy al-Kalbi of Granada who recorded and then transcribed the dictated travelogue of the Tangerian, Ibn Battuta. The book’s full title was A Gift to Those who Contemplate the Wonders of Cities and the Marvels of Travelling and somehow the title of Ibn Jazayy's book captures the ethos of many of the city and country journeys I have been lucky to take in past years.
This one is about Göbekli Tepe, Turkey. 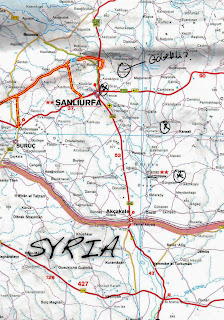 The scientific descriptive language of prehistoric archaeology and geophysical chronology contains such an overlapping melee of terminology that, for me at least, it often creates far more confusion than any intended clarity. In simplistic terms I understand that the Late Pleistocene glaciation or Last Major Ice Age ended finally around 11,000 BCE and at its end Neanderthals and large megafauna became extinct and adaptive homo sapiens hunter-gatherers occupied the savannahs and ‘open’ woodland at the margins of the receding ‘cold climate’ forestation. This era in human terms, the Upper Paleolithic, was associated with the refinement and development of specific purpose stone tools, and the social organisation required for the pursuit of large animal prey on their annual migrations and for the foraging of fruit and wild plants.
The transformation of a ‘cold-climate’ afforested landscape in the southern Anatolian peninsula to an open savannah would have taken thousands of years and the developing society would have mirrored the Natufian culture of the Levant. Pottery, polity, philosophy, protectionism and protagonism would have evolved it what was called the Neolithic Revolution and with it a requirement for a formalised structure of dispute resolution; with the known and with the unknown. 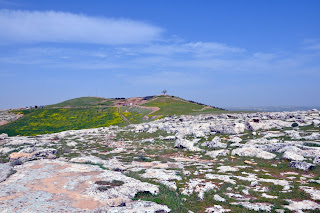 Göbekli Tepe from the South East
Göbekli Tepe (Potbelly Hill) is an elevated mound sitting at the apex of a two-finger limestone outcrop that juts into a barren landscape about 15km to the north-east of the city of Sanliurfa (medieval Edessa) in southern Turkey close to the Syrian border. Since 1995 excavations of five, so-far, of sixteen ground radar detected circular pits have exposed an extraordinary ‘temple’ complex of carved stone pillars and polished limestone floors that pre-date the pyramids of Egypt by 6,000 years has revolutionised our understanding of Neolithic society.
Or has it? Was the complex built for the Gods or Governance? 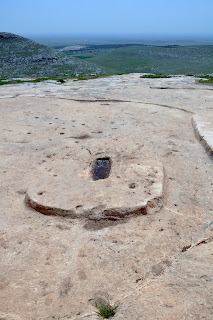 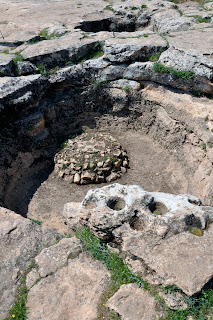 Cisterns and Platforms on Polished Limestone Slab
to Right of Entrance of Göbekli Tepe
I travelled to Göbekli on April 7th to see for myself. A road takes you through farmland benefitting from a new irrigation scheme and the humidity caused by the damning of the nearby Euphrates to a small rough car-parking area mid-way up a low hill. The Turkish antiquities authorities have not yet designated Gobekli as a museum and there is no entrance fee. There is a small hut to the left of the site-entrance where the local Bedouin farmers and now guardians busied themselves killing a goat. To the right of the entrance is a smooth-polished limestone floor with two large carved cisterns at the northern end, two low rectangular hollowed-out platforms in the centre, and four carved-out circular post-holes at the corners. Assuming that this access point was always the entrance to the complex it strikes me that this area was used as a butchery, either sacrificial or celebratory, depending on one’s assumptions of activities on the site on a sunny day 13,000 years ago. It would have been roofed. 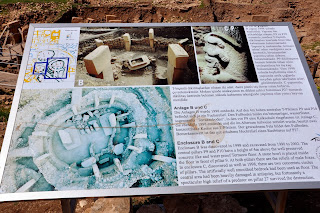 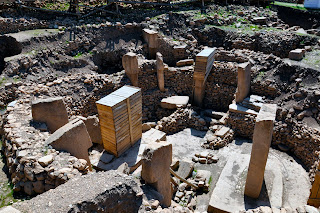 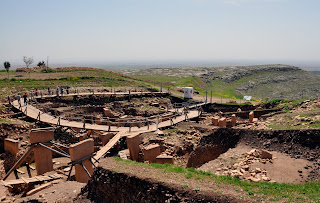 Carrying on up the site you quickly come on the excavated main pit where the excavators have constructed a horseshoe-shaped elevated wooden walkway that affords a wonderful view of the excavations. There are two main pillars of stone-carved limestone weighing an estimate 60-70 tons surrounded by a circle of smaller pillars, with stone seating between them and a stone-wall surround. On the pillars there are the most exquisite carvings of birds, wild boar, leopards, foxes, snakes, bison, and on the large pillars, the animal-skin belt and arms of an anthropomorphic figure. The fact that these delicate, accurate and vibrant carvings were created by artisans using only stone stools is breathtaking. All of the animals are those of open woodland-savannah and not of the mega fauna of an earlier age and some of the carvings have been covered by crude wooden boxes to prevent erosion by the elements. 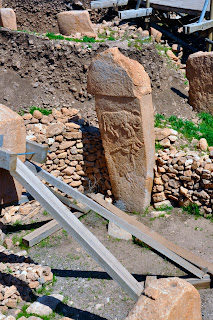 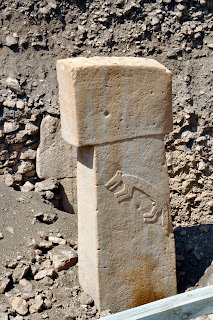 Stone Carvings on Pillars at Göbekli Tepe
One peculiar aspect to the carvings is that on top of one pillar and also on the edge of one of the cisterns near the entrance to the site is a series of closely bunched cup-shaped carved out niches. If the cistern area is sacrificial then it might not be a leap of the imagination to suppose that the cup hollows served to wash and separate certain animal parts, which were then transferred to be placed as offerings to the top of the complex pillar. I would also suggest that the two central pillars (? Perhaps a representation of a man and a woman) had no role in the structural support of the roof but were the central deities as in Egyptian, Greek and Roman temples of much later years.
The most extraordinary aspect to Göbekli is that it exists at all. The fact that it does is due to a deliberate backfilling (not destruction) by the society that created them when they abandoned the site circa. 7,500 BCE. Radiocarbon dating of charcoal deposits on the polished limestone floor date the origins of the main complex to about 9,000 BCE, but the site is thought to have existed since about 11,000 BCE.
Two further pits around the main central one have been excavated as well as the beginnings of further work on the northern and western margins. Atop the mound is a single tree and two stone graves of the Byzantine era. 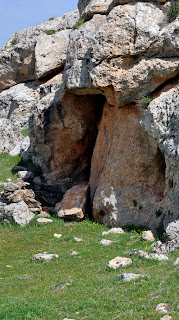 Mining Site of Gobekli Tepe Limestone Pillar
150m to South East of Complex
I walked out the limestone outcrop to the south-east to see where the huge pillars were mined. Beneath my feet an endless amount of carved flint tools and arrowheads. Looking back at the Tepe I wondered at the incredible stone-age industry and organisation required to construct the complex and realised that if lasted for at least 1500 years to be backfilled rather than destroyed then it must have been very good at whatever function it provided for the hunter-gatherer society it served.
But was it for the Gods or Governance?
This is a question that 11,000 years later we still ask about our institutions and their purpose. In Göbekli’s case there needs to be an urgent granting of UNESCO status and the construction of a formal museum and interpretative centre to cover the hill to protect its unique and critically important discoveries. 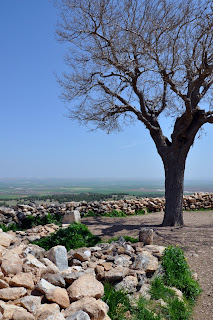