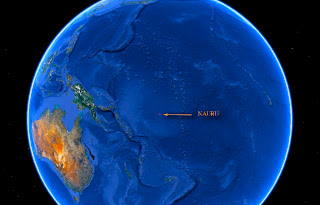 Marcus Stephen, President of the Republic of Nauru

The Republic of Nauru, the smallest Republic in the world, is a small island of about 21 square kilometres, inhabited by 9500 people in the middle of the South Pacific. A long way from everywhere (especially Nablus) the centre of the island was a once deep repository of millennia of bird-shit which provided the phosphate mother-load subsequently plundered by Germany, Japan, Australia, New Zealand and the United Kingdom. Gaining independence in 1968 it had one of the highest per-capita incomes in the world until the phosphate ran out (estimated at one point to last about 300 years the commercial exploitation by Australia in particular reduced that to about 30) and Nauru was reduced to earing its crust by allowing Australia build a detention centre for migrant boat-people and allowing illegal money laundering. 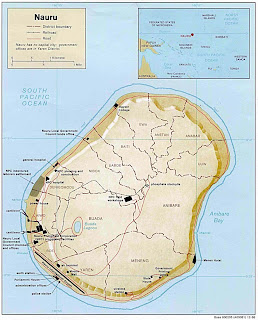 Nauruans suffered severely in the Second World war (1500 were transported to the island of Truk for slave labour) and fully understand the exploitative potential of a more powerful neighbour backed by “Superpower” consensus (see Judgement on Preliminary Objections. Nauru v. Australia. International Court of Justice. No 92/18 26 June 1992) and yet in the General Assembly vote taken in the 67th Session on the 29th November 2012 to accord the Palestinian Authority non-Member Observer State status (UN Doc. A/Res/67/19) at the UN, Nauru voted against the adoption of the resolution (along with the USA & Israel of course, but also Canada, the Czech Republic, Marshal Islands, Micronesia, Palau and Panama).

I am not entirely certain what the people of Nablus ever did to Nauru. It is not clear from the debate as to why they voted against the resolution as I can find no record of a verbal or written submission. Being generous I might conclude that Nauru’s stance might have because of similar concerns to those expressed by Canada and the Czech Republic about the ‘watering-down’ of the impetus to achieve a true Two State solution but I suspect it was more likely part of a South Pacific game plan to force a greater ‘climate change’ dialogue by flexing their voting rights.

It is true that the non-Member Observer State status might allow a ‘back-door’ access to other organs such as the International Criminal Court but in the realpolitik of complete Israeli and American intransigence to progressing the Two State solution it perhaps is the only way at present.

I have a problem with Nauru and its political posturing, who without explanation, and who only two months previously on the 26th September 2012 had ratified the UN Convention against Torture and Other Cruel, Inhuman or Degrading Treatment or Punishment, would then ignore the inhuman and degrading treatment perpetuated by Israel on the people of Nablus and would decide to deny them and all other Palestinians some avenue of hope in trying to rightly achieve the independent statehood that Nauru has already gained for the sake of some ‘great game’.

There is nothing as sad as a collective amnesia of hope. 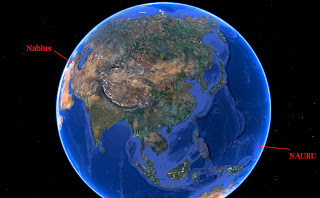