This rihla is about the town of Killyleagh on the western shore of Strangford Lough in Northern Ireland. 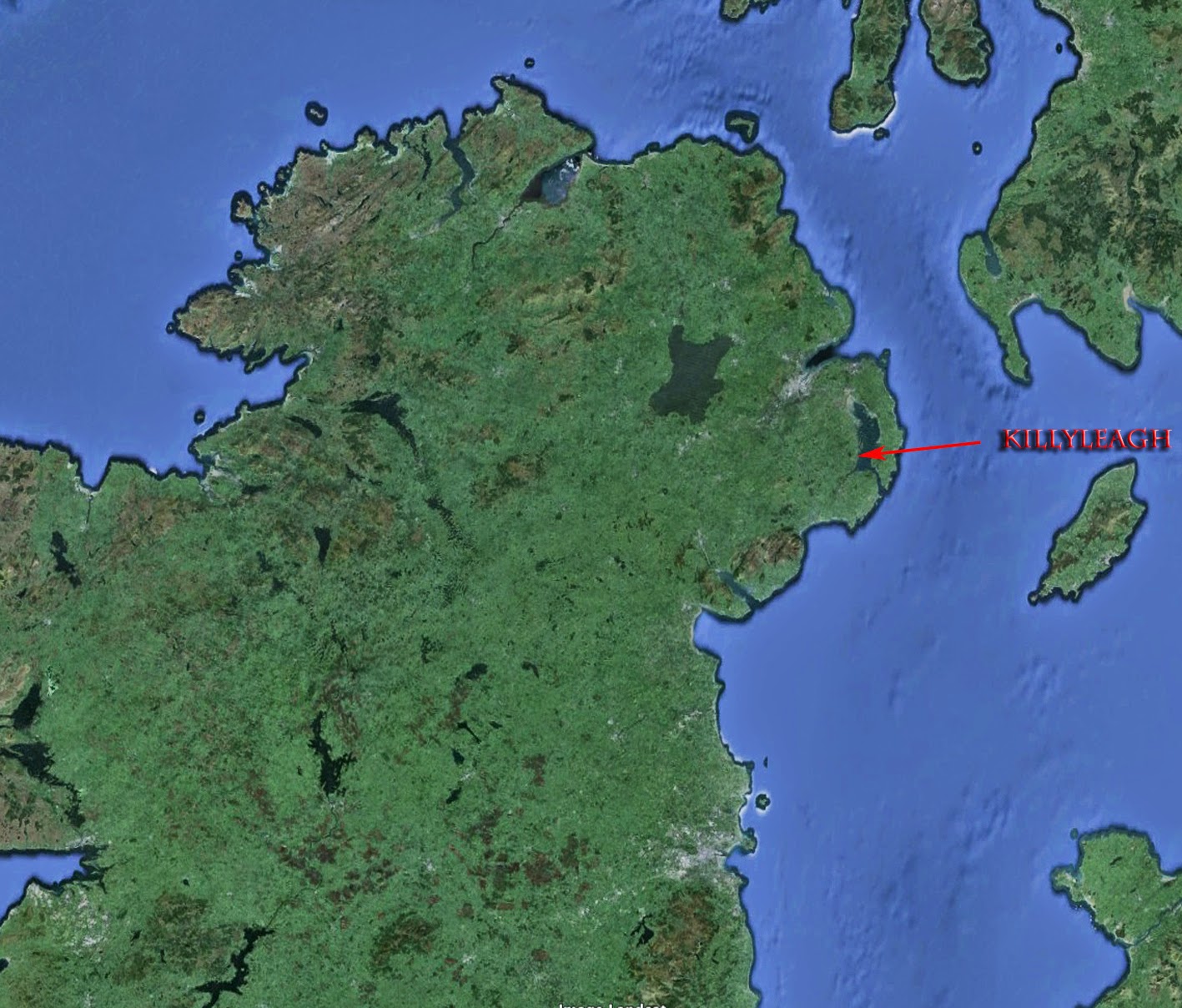 A few years ago while travelling back southwards from participating in a golfing competition at Royal Portrush GC on the North Antrim coast I decided to make to make a non-golfing pilgrimage to Killyleagh on the western shores of Strangford Lough. Killyleagh had been home (the birthplace of one and the residence and final resting place of the other) to Sir Hans Sloane (1660–1753) and the Rev Edward Hincks (1792-1866), two of the most brilliant Irish minds of the Enlightenment and for a long time I had wanted to see this small town, which had influenced such inclusive scholars. 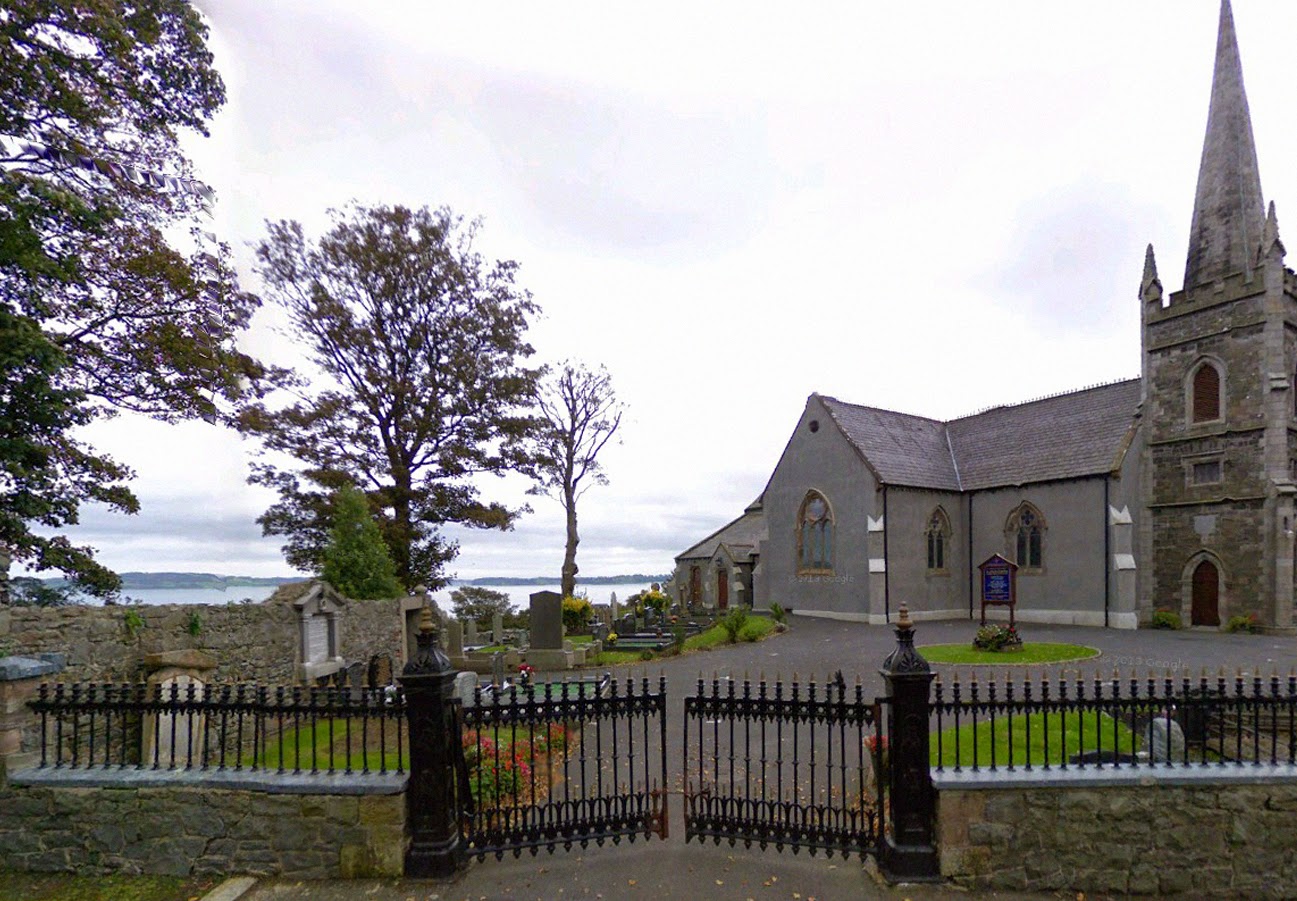 Killyleagh is a small, pretty town, and coming in from the Lisburn direction on the western side of the town you arrive at a small green in front of Killyleagh Castle, the oldest inhabited castle in Ireland. Built in a French Loire chateaux-style it hosts concerts (famously by Van Morrison) and offers accommodation in the turreted towers. Travelling directly east from the castle along Dufferin Place you cross the A22 and gently rise up Church Hill to the gates of St John the Evangelist, Church of Ireland on the apex of a hill that overlooks the harbour, Sir Hans Sloan Square, and Strangford Lough below. Attached to the church, is Church Hill House, the former rectory built on land given to the church 1733. The current building, where Edward Hincks and his family resided, was erected in 1812. Within the church graveyard are the tombs of Edward Hincks’ father Thomas Dix Hincks as well as Edward’s and also the gravestones of two of Hans Sloan’s infant brothers Henry and John. On the day I was there autumn gales were howling and it had an almost Brontesque feel to the place. 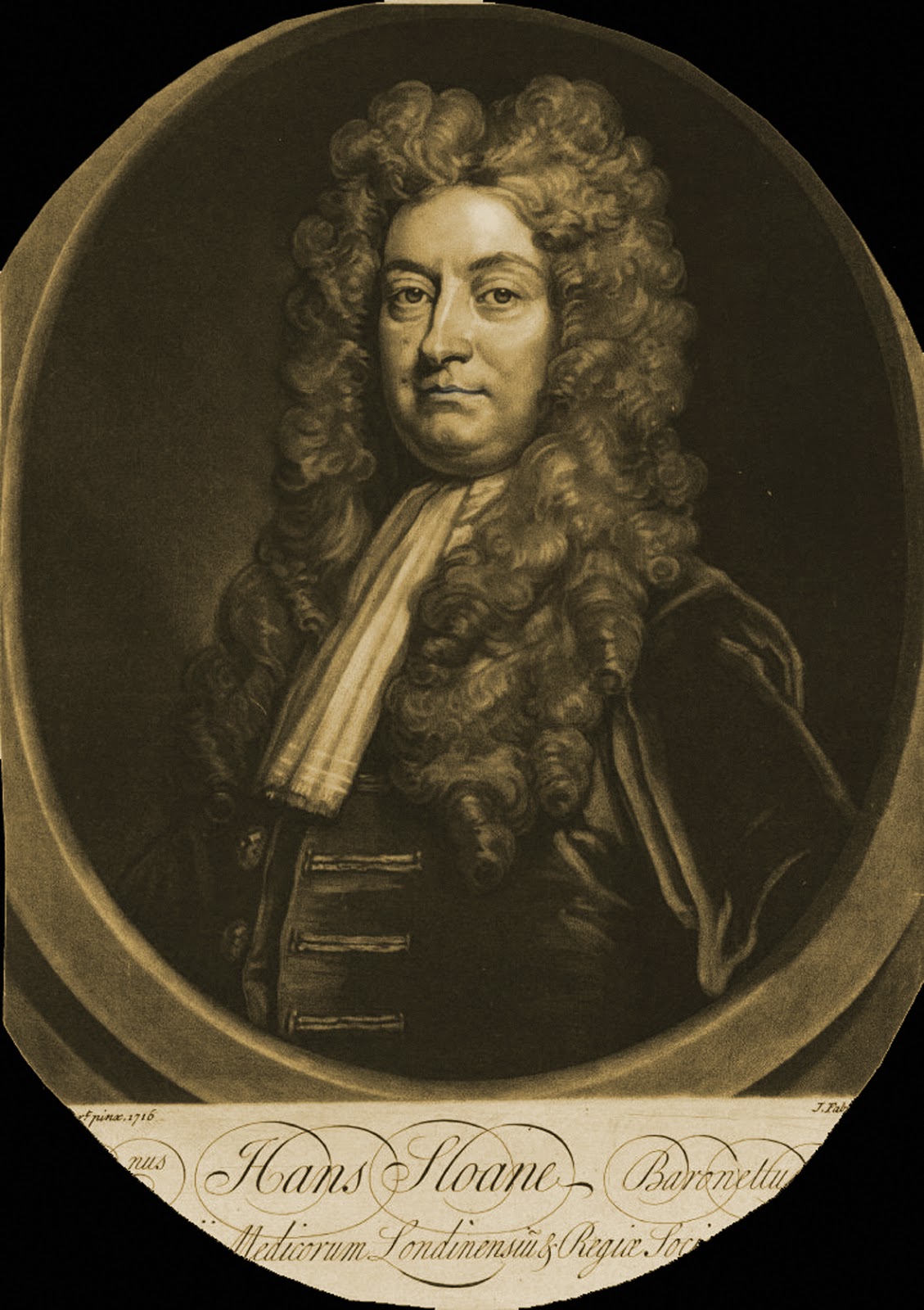 Sir Hans Sloane in addition to becoming President of the Royal College of Physicians in 1712 and Physician to King George II in 1727 also, in the same year, succeeded Sir Isaac Newton as President of the Royal Society. He had been an avid collector since childhood and had built up a large library and unique cabinet of curiosities of his own as well as inheriting or acquiring the natural history collections of many others. He bequeathed on his death in 1753 all of these to the nation, for a nominal sum to his heirs, and combined with the library of George II, and the Harley and Cotton collections, his bequest formed the basis for the foundation of the British Museum by means of a lottery (British Museum Act 1753 [26 G 2c 22]).

“Whereas from my youth I have been a great observer and admirer of the wonderful power, wisdom and contrivance of the Almighty God, appearing in the works of his Creation; and have gathered together many things in my own travels or voyages, or had them from others, especially my ever honoured, late friend William Courten, Esq; who spent the greatest part of his life and estate in collecting such things, in and from most parts of the earth, which he left me at his death . . . And whereas I have made great additions of late years as well to my books, both printed as manuscript, and to my collections of natural and artificial curiosities, precious stones, books of dryed samples of plants, miniatures, drawings, prints, medals, and the like, with some paintings concerning them. . . . Now desiring very much that these things tending many ways to the manifestation of the glory of God, the confutation of atheism and its consequences, the use and improvement of physic, and other arts and sciences, and benefit of mankind, may remain together and not be separated, . . . where they may by the great confluence of people be of most use.”

In a codicil to the will in 1751 he reiterated,

“And I do hereby declare, that it is my desire and intention, that my said musaeum or collection be preserved and kept . . . and that the same may be, from time to time, visited and seen by all persons desirous of seeing and viewing the same, under such statutes, directions, rules, and orders, as shall be made, from time to time, by the said trustees . . . that the same may be rendered as useful as possible, as will towards satisfying the desire of the curious, as for the improvement, knowledge and information of all persons. . . .” 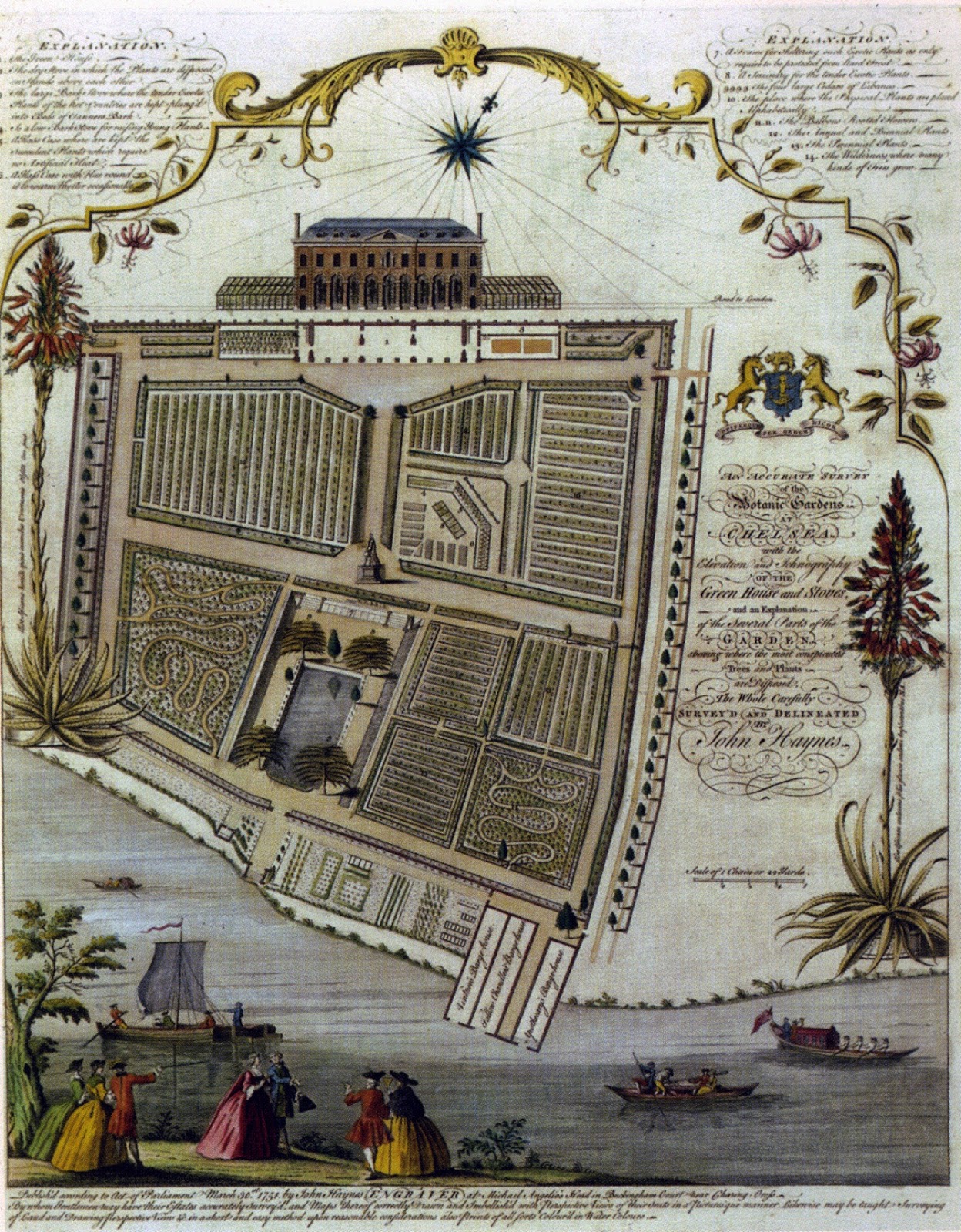 Sloane also introduced drinking chocolate to England from Jamaica and established the Chelsea Physic Garden. He was the first medical practitioner to be given a hereditary peerage and although his personal scholarship was limited in terms of scientific output (A Voyage to the Islands Madera, Barbados, Nieves, S. Christophers and Jamaica, with the Natural History of the Herbs and Trees, Four-footed Beasts, Fishes, Birds, Insects, Reptiles, &c. of the Last of Those Islands, 2 vols. [London: 1707, 1725]) it was his altruistic foresight that allowed many following after him to flourish. 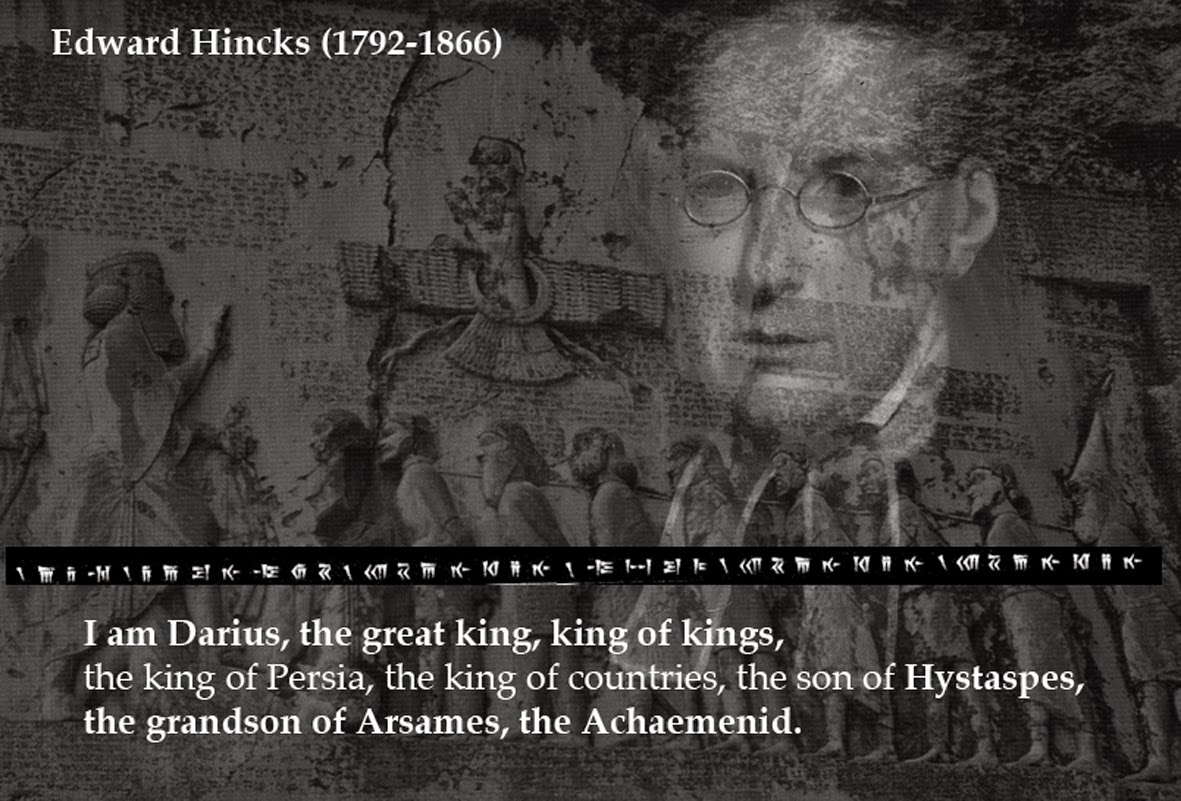 Growing up in Cork I was always fascinated by the somber-looking but disused Unitarian Church recessed behind wrought iron gating on Prince’s Street – until the 1750’s the street was known as Presbyterian Meeting House Lane – in the city. The church and attached residence was the birthplace of one of Ireland’s most brilliant scholars, Edward Hincks. Educated firstly at home by his father Thomas Dix Hincks – a future Professor of Hebrew and Oriental Languages in Belfast – he then attended Middleton School and entered Trinity College, Dublin at the age of 15. Ordained an Anglican clergyman he left the University in 1819 to become rector of Ardtrea in Armagh ( a church living that was a sinecure of Trinity College). At that stage he was already recognized as an accomplished expert in Semitic and Oriental languages (Hebrew, Syriac, Arabic and Sandscrit) in addition to German and French. In 1826 he moved to become Rector of Killyleagh, Co. Down, Northern Ireland and from his house at 14 Church Hill became one of the world’s leading, if not the most accomplished, philologist of all time. 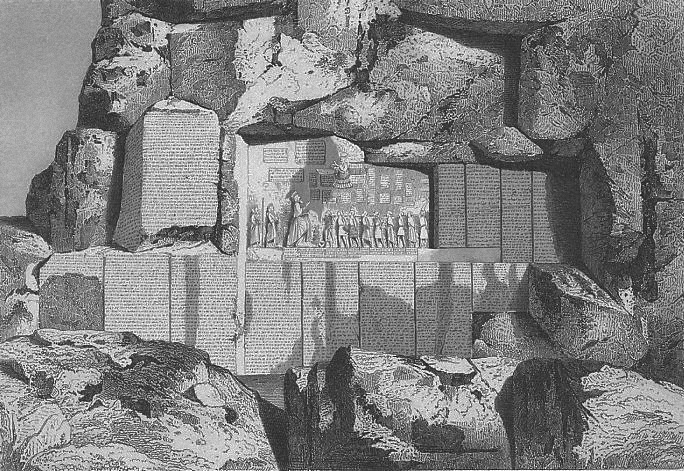 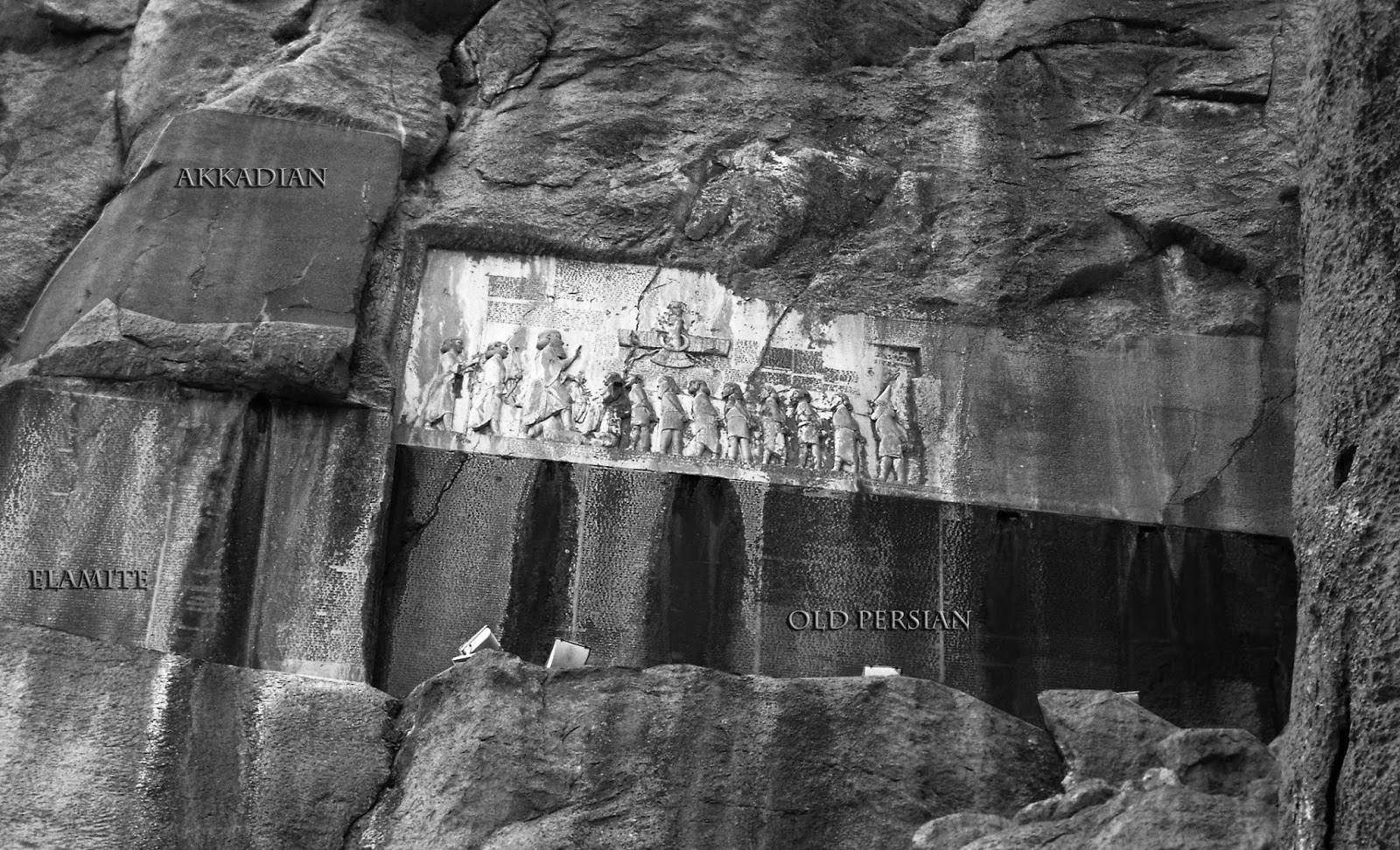 Behistun Inscription
Kermanshah, Iran.
In the space of 34 years Hincks first published in 1832 on Hebrew and then in 1833 the decipherment of the demotic language of ancient Egypt. He then partially turned his attention to Old Persian cuneiform and with Rawlinson and others was to be responsible for the understanding of the ancient texts. He also turned his attention with considerable accomplishment to the decipherment and understanding of Elamite, Akkadian and Uratarian cuneiform languages. One of his greatest accomplishments was establishing that cuneiform was developed by the non-Semitic Sumerians but was adopted by Semitic Akkadians around 2000 BCE. Even up to his death Hincks spent time studying and understanding agglutinative Mongolian and Hungarian languages to try and establish the origin of the Sumerian cuneiform scripts. 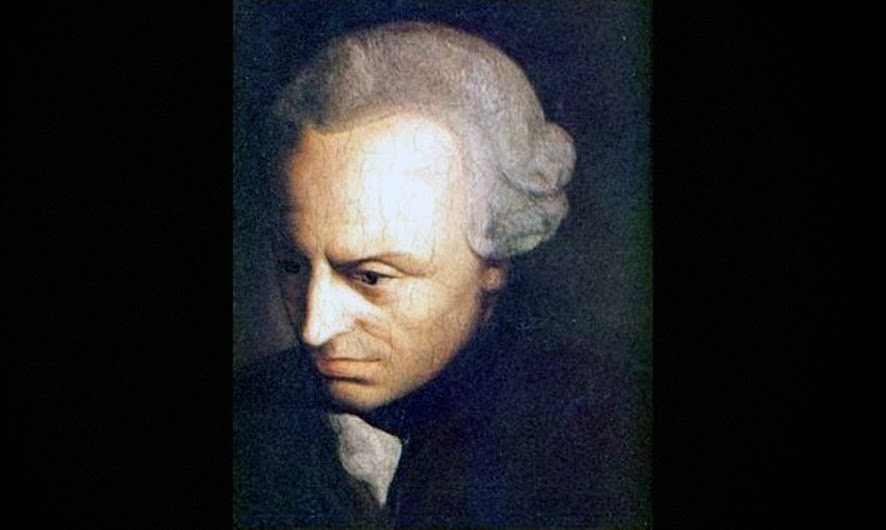 The public use of one’s reason must always be free, and it alone
can bring about enlightenment among men.
Immanuel Kant
November 1784
Berlinische Monatsschrift

Edward Hincks like Hans Sloane, and perhaps this is the true gift of Killyleagh, was the ideal embodiment of everything the Enlightenment hoped to achieve, at both a personal and societal level. He remained eternally generous with his talents with other scholars and even contributed across the religious academic divide in Ireland to the Catholic University’s The Atlantis journal. 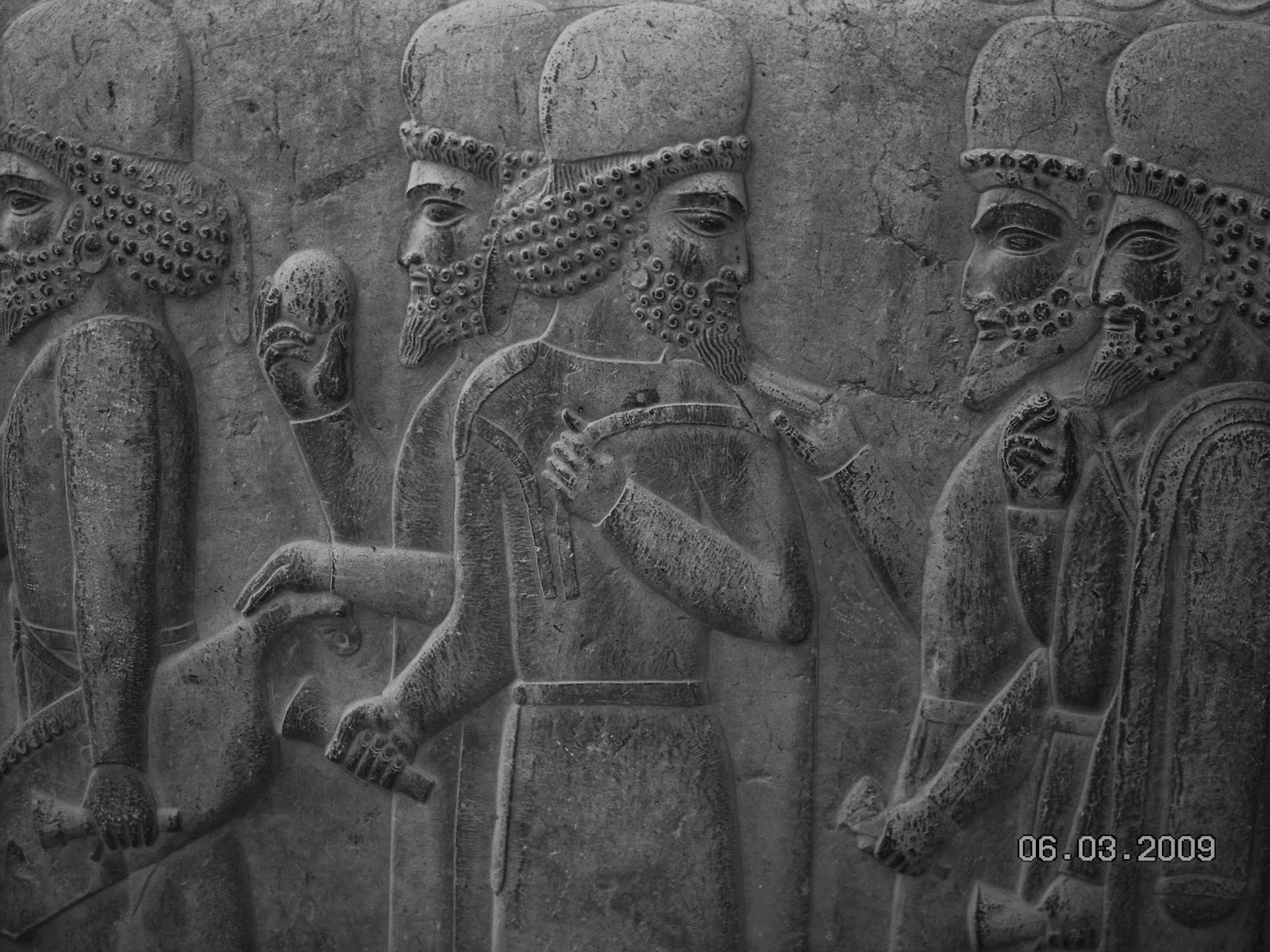 His ‘decipherment’ conflict with Sir Henry Creswicke Rawlinson, initially over the primacy of the latter's Behistun inscriptions in deciphering Old Persian and Akkadian is now well documented (see: Lesley Adkins’ Empire of the Plain & Kevin J. Cathcart’s Correspondence of Edward Hincks). Ironically the dispute was to culminate in the very institution that former Killyleagh parishioner Sir Hans Sloane’s will provided for: the British Museum. Rawlinson objected to Hincks being contracted by the Trustees of the Museum to catalog and decipher their cuneiform collection and in late 1854 attempted to block further access by Hincks to the inscriptions of the Museum.

Not exactly what Hans Sloane had in mind or what his will had mandated when the museum was established! 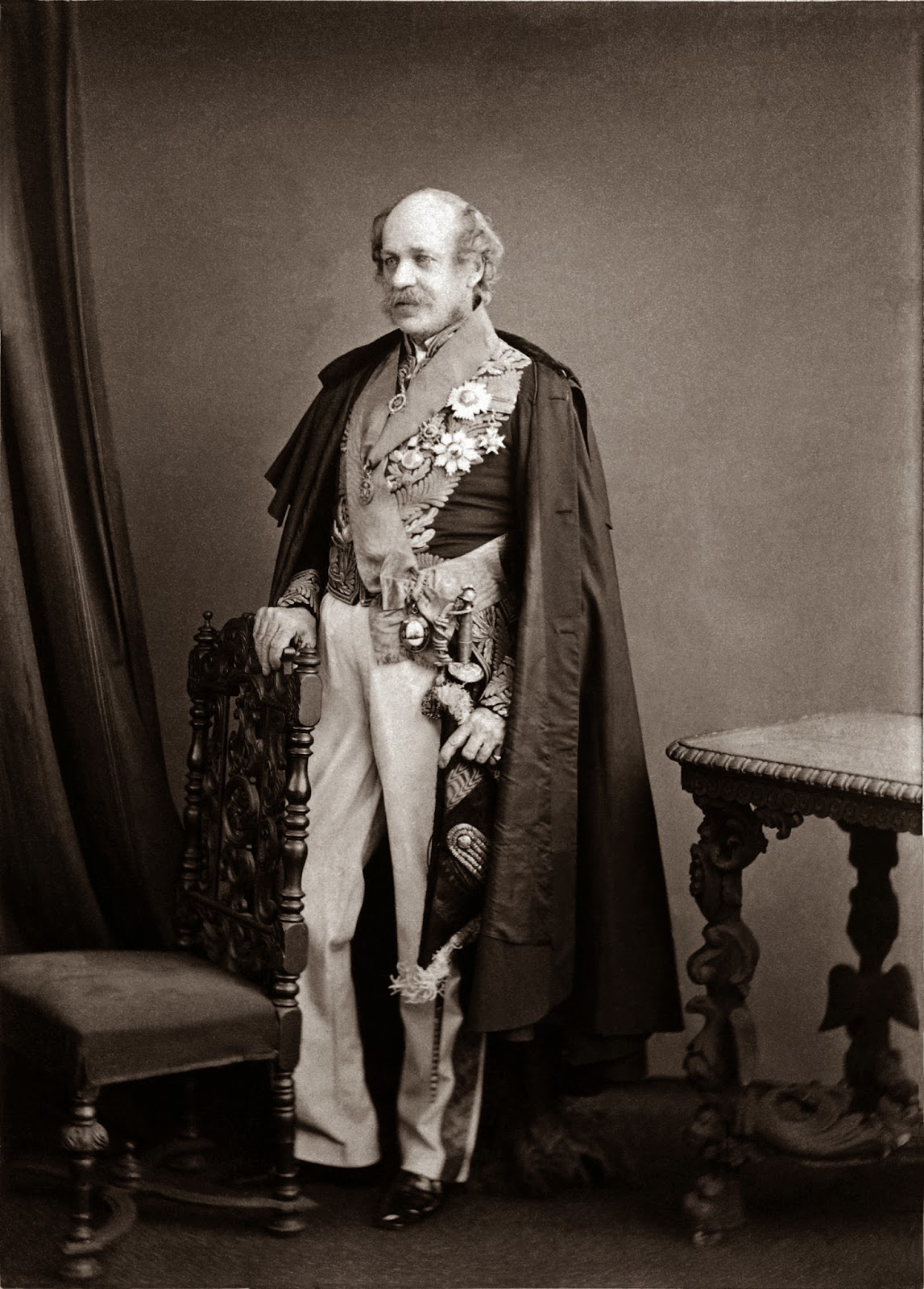 In fairness to Rawlinson, he had put in a huge amount of exploratory and physical work in the field and he, in very much the Empire spirit of the times, felt this ‘physicality of discovery’ somehow granted him a sense of proprietorship over the subsequent decipherment. Victorian ‘adventurer archeologists’, until the advent of Flinders Petrie, held onto what they had.  Theirs was a concept of finding a moment frozen in time and to get it moving again. That was the way of Empire.

Following Edward Hincks death in December 1866 Rawlinson however, to his credit, was one of the signatories on a petition to Lord Derby to try and obtain a pension for Edward’s widow Jane. In due course she was provided for and perhaps in the end the Killyleagh Enlightenment Principle shone through. 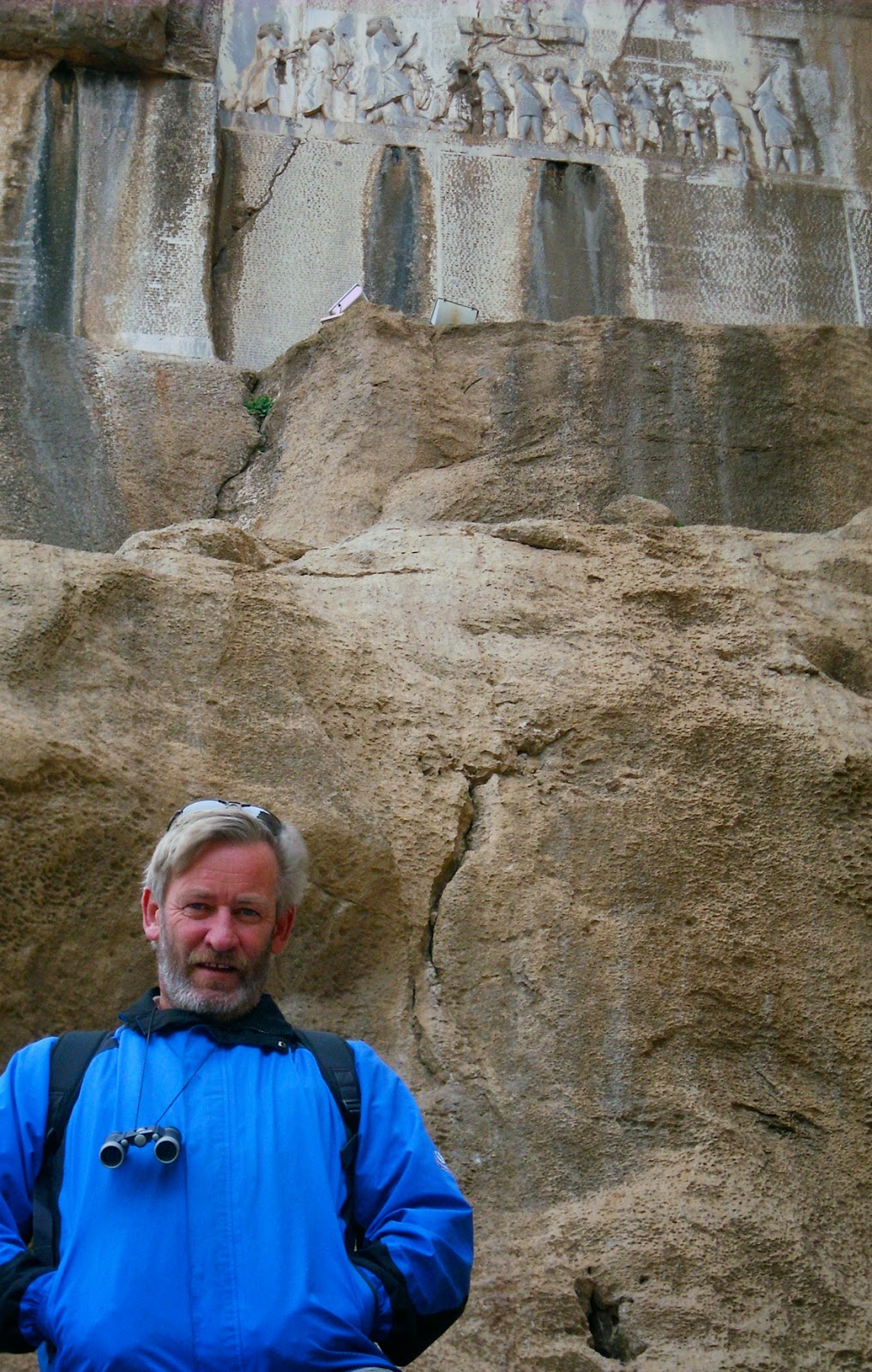 A couple of years later, while standing in front of Darius’ Behistun (Bagastan – Place of God) inscription in Kermanshah, Iran, I thought of the sweat and tears of Rawlinson crawling over the rock to take his imprints of the carvings while back in Killyleagh, in a land despoiled by the Great Irish Famine, a man who had never felt the desert air hunched over similar cuneiform inscriptions from Persepolis and already had solved the puzzle.