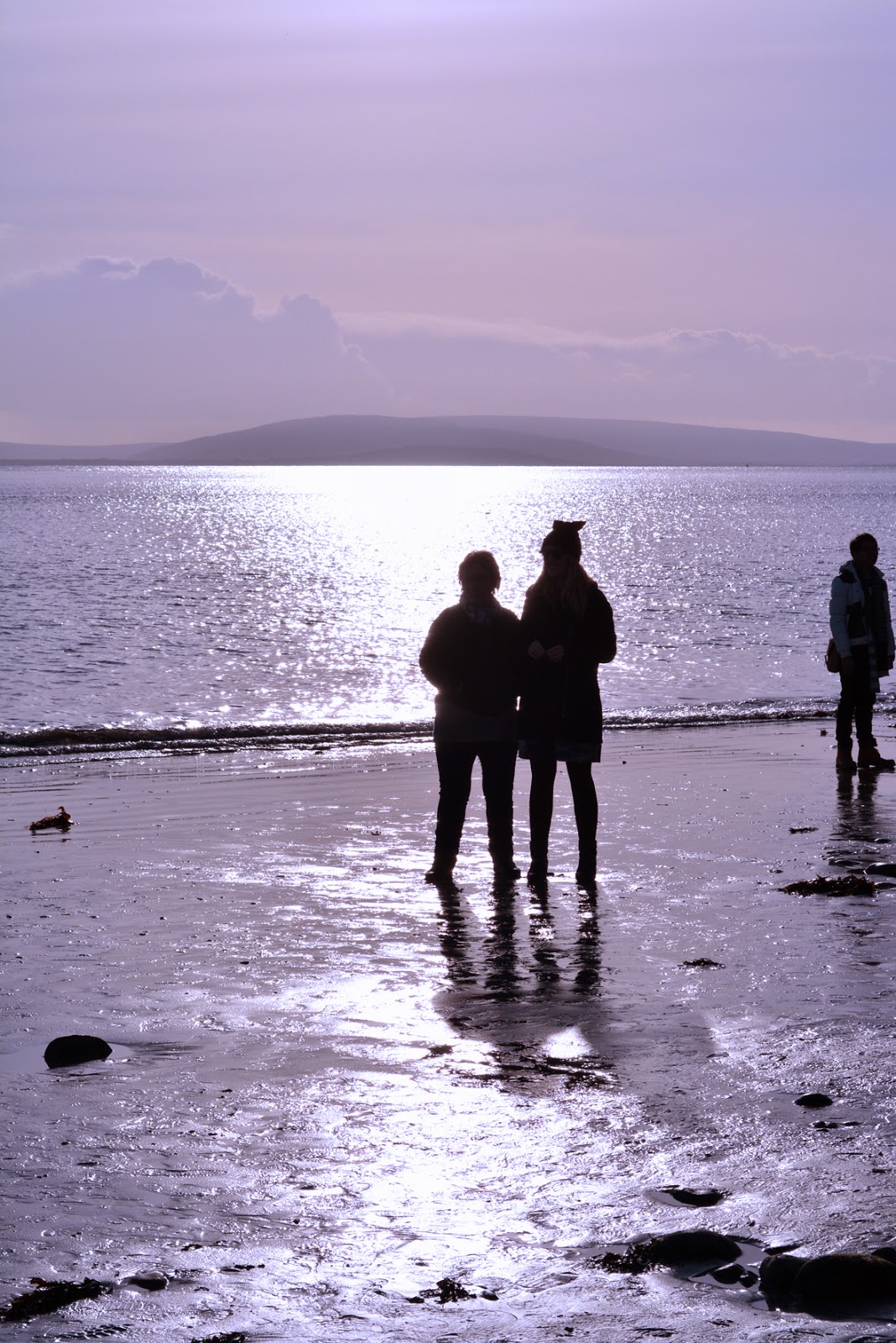 It’s that time of the year in the northern hemisphere, a week or so after the Winter Solstice, when you encourage yourself, using familiar landmarks, to imagine ( knowing it has already shifted a degree or so) that the sunset is not as far south-south-west as it was and when the thoughts of longer days and the advent of spring force a similar degree of separation from the past.  Those thoughts of the present and future coalesce into questions about the road ahead, for you as an individual but also for society in general.

In a most severe consequence of trying to address these questions and with often polar-opposite symptoms, the stress (or genetics, or drugs, or trauma) can cause an at-risk individual to suffer a pathological outcome, where at one end of the clinical spectrum a ‘deep’ despair may result and at the other a ‘high’ euphoria. Both of these severe manifestations result in a psychological inertia, where the questions and the answers become irrelevant. The process itself destroys. This might be termed an existential schizophrenia, a term borrowed from a recent address by Pope Francis to the Curia, the administrative and diplomatic section of the Vatican State, where he berated them for their failings. In between the extremes there is a supposed grounded or surface ‘normality’ where individual coping mechanisms, cope even if those questions remain unanswered.

I’d like to think of myself as a curious philosopher-of-sorts, armed with the tools of mathematical logic; tools honed over a lifetime’s experience to examine, dissect, and conclude upon the big questions. In truth I am not. All these years later, I realise that despite the enquiring curiosity I lack the intellectual perseverance to fully exhaust the analysis, knowing that for every questioned answered another is posed. Avoiding nihilism I escape again and again to whimsy, a coping mechanism that demands little, expects little and perhaps returns little apart from a fleeting moment of respite.

Part of my whimsical approach to the 'big questions'  often involves an association of images rather than specific ideas and a recurrent association in recent years has been a diagrammatic representation in my head of the similarities of hydraulic fracking to extract shale-gas from mother earth and tumescent liposuction to extract fat from humans. 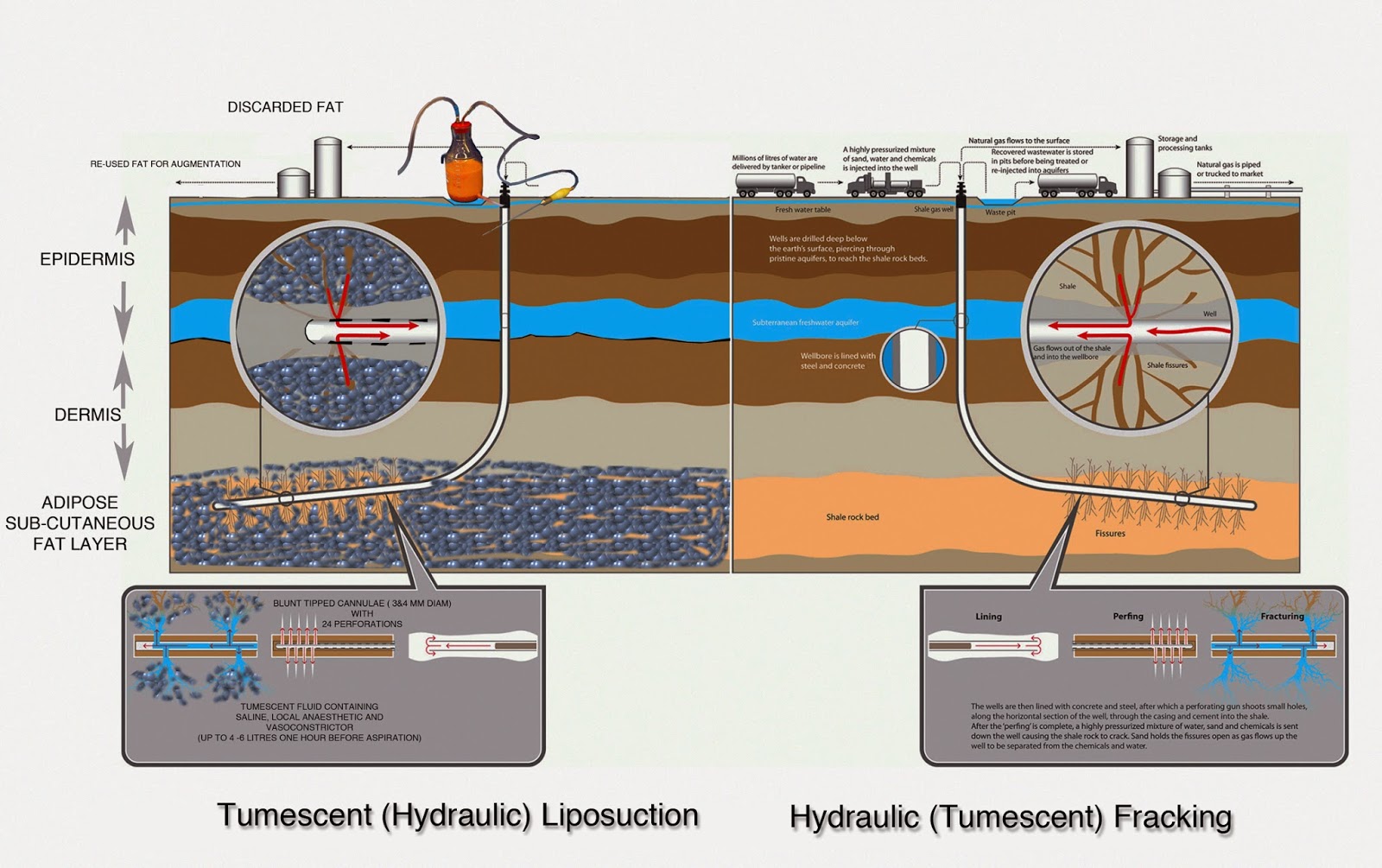 Horizontal hydraulic fracturing (HHF) or “fracking” using high-pressure “slickwater” lateral fracturing of subsurface shale beds to recover hydrocarbon shale gas and light crude or “tight” oil has only been in commercial existence since the early 1990s but already its ability to extract high volume gas reserves has, in particular, revolutionised the North American energy market where some 4,000 HHF wells have been drilled (or old vertical bores re-drilled) and put into operation.

The unconventional gas (UG) HHF methodology has resulted in the commercial extraction of about 3.5 million barrels of tight-oil per day and 9.5 trillion cubic feet of shale-gas per year. This represents approximately 30% and 40% of the domestic US production of liquid fuels and natural gas respectively. In addition the production of HHF derived tight oil and shale-gas over the next 10 years is projected to grow by 30% and 60%. 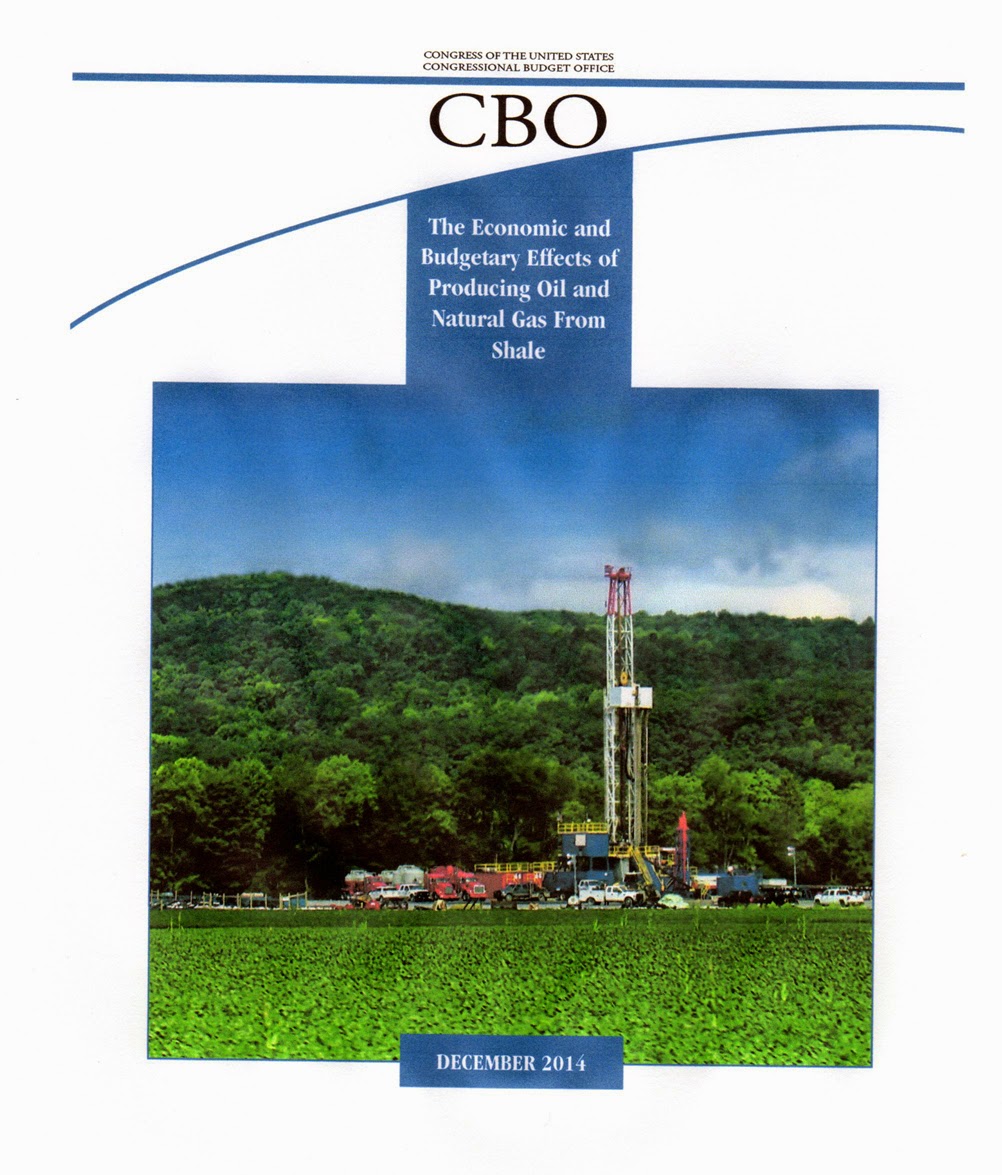 As a consequence of the success in shale-gas extraction US domestic gas prices have dropped by about 60%, the US is considering building liquid petroleum gas refineries to export gas (up to now the US has been a dominant importer of LPG products and never established a capacity to actually produce and export) for the first time. This sudden and dramatic turn-around in US domestic energy supplies, allied to falling world-wide oil prices due to oversupply, has re-invigorated a fading imperium, both at a commercial and existential level.

Worldwide UG production using HHF technology is set to meet 25% of all energy needs by 2035 and will also alter the international geopolitics of energy exploitation as the geographic distribution of largest shale reserves differs from that of the fossil-fuel reserves. For example Canada and Argentina have some of the biggest reserves in the world.

The downside is sub-stratum destabilisation and the potential for contamination of the water table. HHF is an intensely water-dependent technology and added to the hydraulic drilling water (slickwater) are a number of chemical solvents constituted to maintain the integrity of the boring technology, as well as surfactants and the proppants such as quartz crystals used to sustain the induced fractures to ensure the extraction flow of gas. Currently many of the US drillers store the “de-gassed” slickwater in on-site extraction ponds and allow the water to evaporate. The resulting HHF “mud” contains high concentrations of the chemical solvents used.

In 1921 Dr Charles Dujarrier, a French Gynaecologist attempted to reshape the “fatty” ankles and knees of a patient of his who was a dancer and did not like their appearance. He used a uterine curette but managed to tear her femoral artery resulting in the dancer requiring a leg amputation. It was not until 1976 that Arpad and Giorgio Fischer, father and son Italian cosmetic surgeons, introduced the modern technique of machine-suction assisted removal of fat with blunt curettes and called it liposculpture. The “dry” procedure was associated with significant blood loss, haematoma and seroma formation and as a consequence marginal cosmetic benefit. 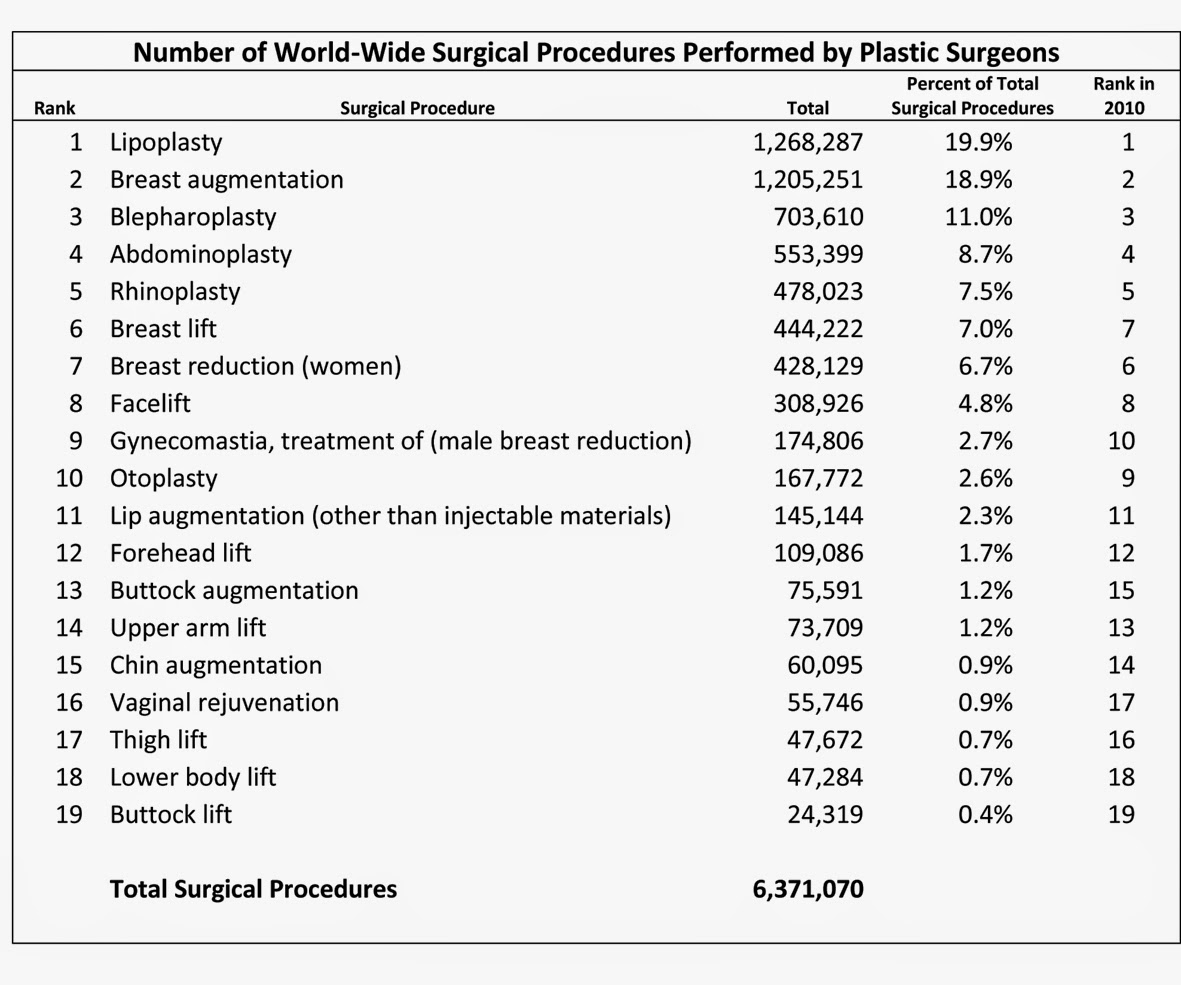 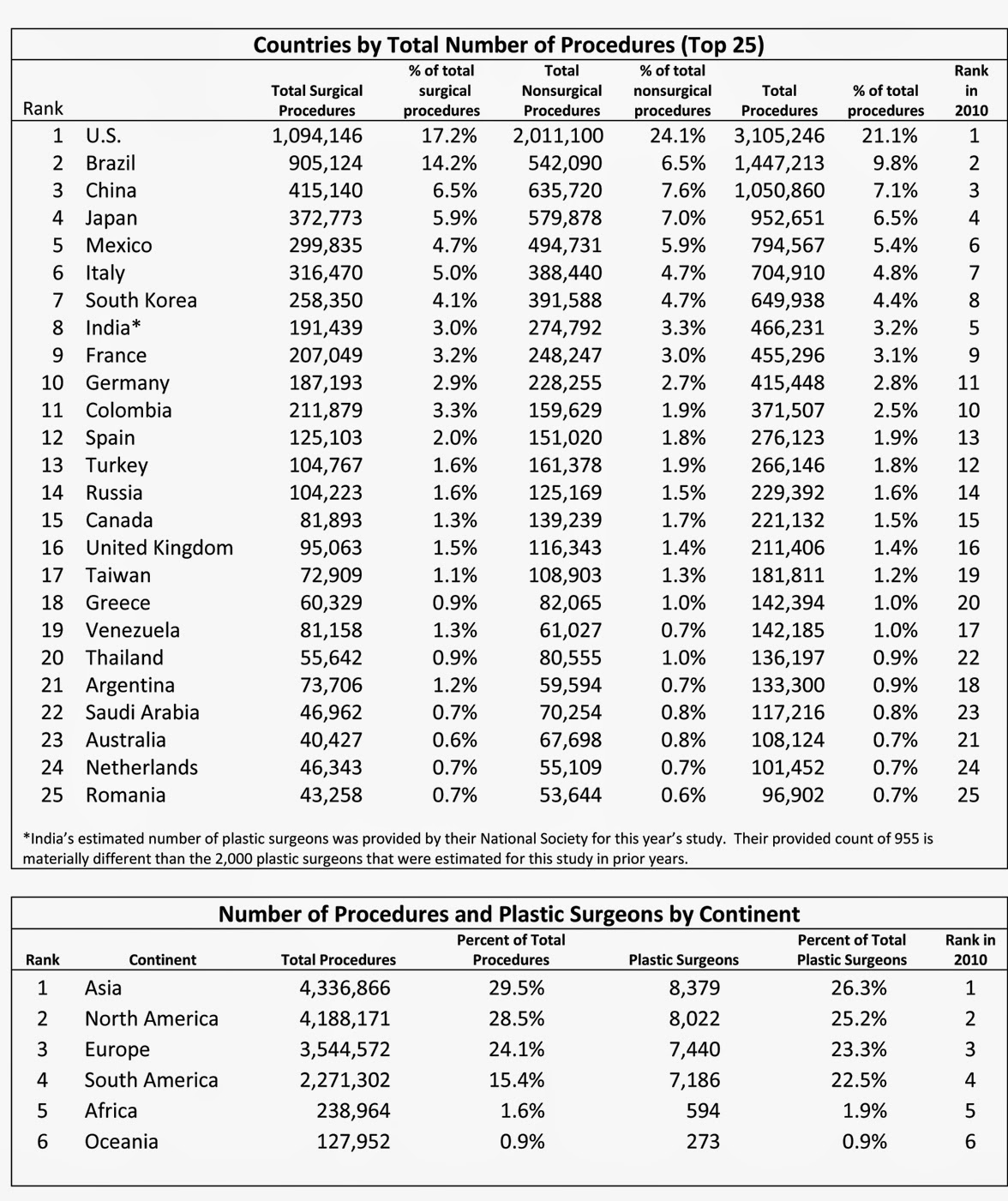 Procedures by plastic-surgeons worldwide in 2010.
Lipoplasty primarily means liposuction. The total number
of procedures does not include procedures done by other specialists
such as dermatologists.

In 1987 – around the time that George P. Mitchell was developing and promoting horizontal hydraulic fracturing for shale-gas recovery – Dr. Jeffrey Klein, a Californian Dermatologist, evolved the 1983 Fournier and Illouz “wet” tumescent or hydraulic technique to constitute a mixture of physiological saline, local anaesthetic and a vasoconstrictor to reduce blood loss. Using this approach most liposuction procedures could then be done as office or side-room procedures. In the years since the volumes of tumescent fluid have increased thereby increasing the amount of fat that could be aspirated at one session. Other promoted advances such as ultrasound or laser probes designed to break down the fat to make for easier aspiration have not surpassed the tumescent technique in overall safety and outcome.

Why such popularity in liposuction?

Where weight reduction is considered morbid obesity in the developed world is becoming a major health problem. Amongst other intervention strategies many people associate liposuction with weight loss and thus consider the procedure. Indeed the results concerning weight loss following liposuction are equivocal with some studies reporting that 50% of patients report a weight gain. An interesting Norwegian study in 2010 showed that the presence of an eating disorder was a significant predictor of an interest in having liposuction performed.

The main drive of course is appearance. We have idealised notions of ourselves and others and what constitutes animal attractiveness. The desire to attain, maintain and regain this “attractiveness” has always been and will always be a part of human existential being. 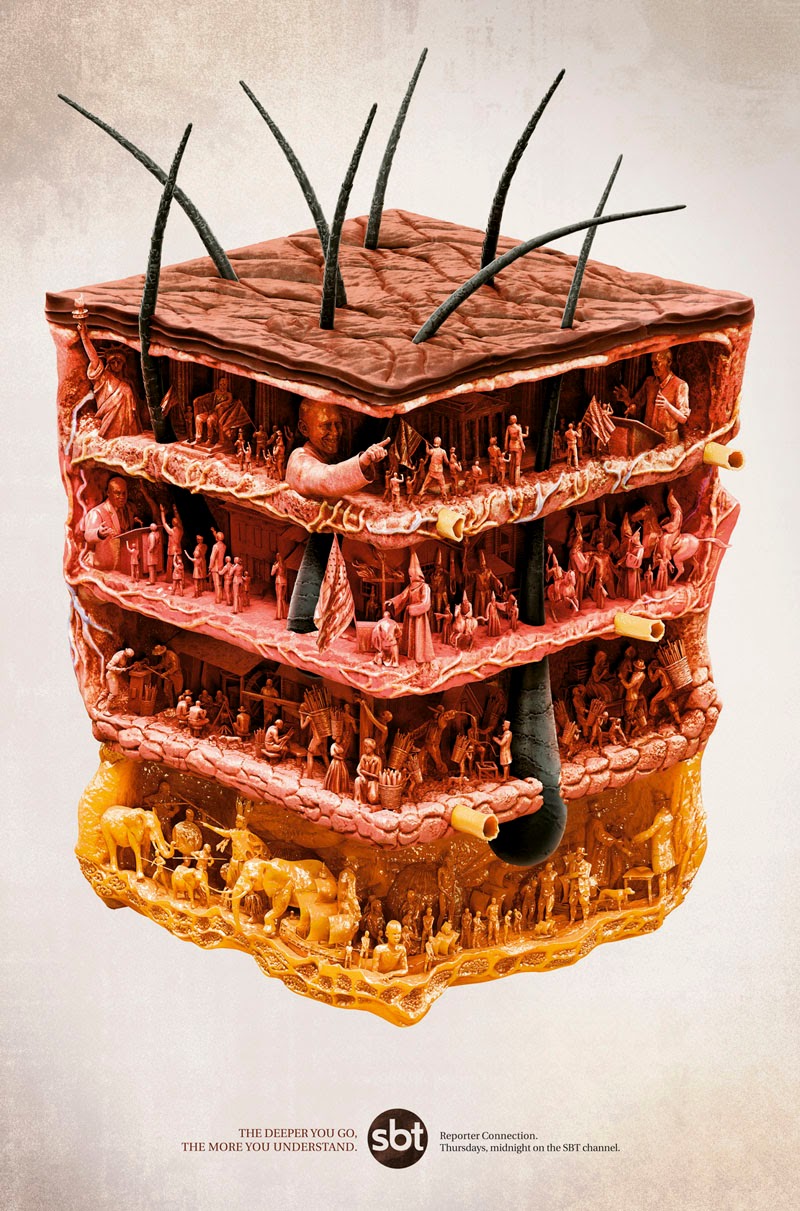 The last 15 years have seen the introduction and indecently-fast adopted incorporation of two techniques, two solvent driven technologies designed to extract and thereby “shape” our world at an individual and societal level. The supposed – real and imagined – value-added benefits for the individual, geo-political and commercial sense of wellbeing have ensured that the hazards – physical, psychological and geological – are downplayed and marginalised for the greater good.

These are existential questions: For the present autologous fat and shale-gas are the Ambrosia of the 21st Century: there is an expectation that to extract, to consume, to attract is to survive.

George P. Mitchell, the pioneer of shale-gas fracking, was an Arcadian. His parents were immigrants from Arcadia in Greece surnamed Paraskevopoulos, and whose father adopted the name Mike Mitchell. Arcadia in Greek mythology and religion was the principal home of worship to Pan, the ancient lecherous Greek God of the Wild, and inventor of the famous pipes. For the mythological inclined Pan and Asclepius (the God of Medicine) were the only Greek gods to actually die and this is perhaps salutary when we consider the medical and geological futures of hydraulic or tumescent drilling. It is also ironic that it is Pan’s fellow Arcadian who has become the subject of equal veneration all these millennia later. 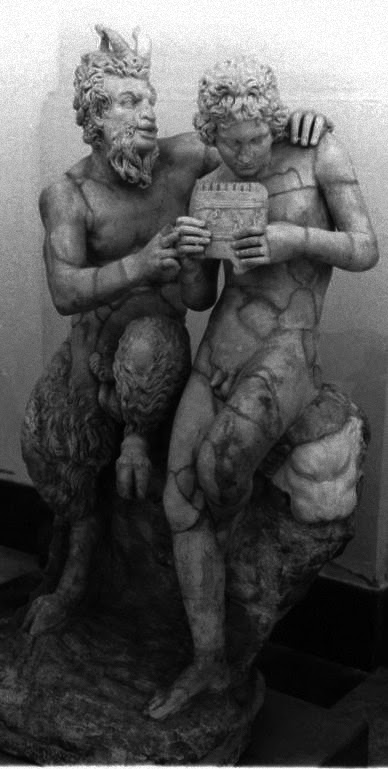