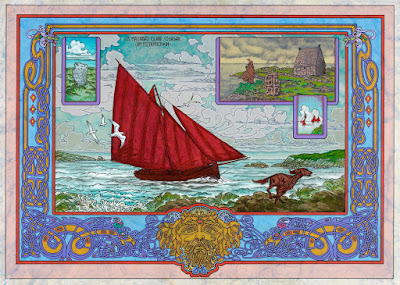 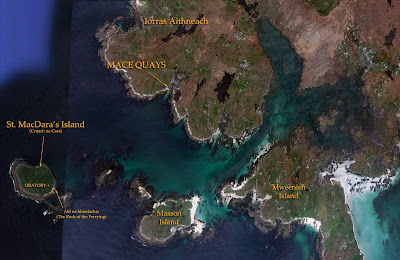 Some of the best journeys you can take are those closest to you. This Rihla is about the island hermitage of St Sionnach MacDara (on the island od Cruach na Cara a.k.a. Cruach Mhic Dara or Oileán Mhic Dara), the patron saint of Connemara fishermen, that is located off the south-west coast of Connemara near Mace Head and the annual fishermen’s pilgrimage to the island held on the 16th July every year. 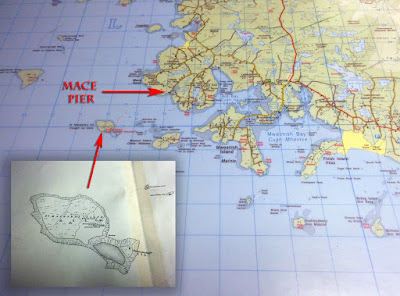 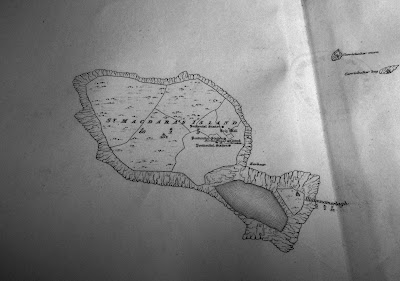 Little is known about the life of St. Sionnach MacDara and yet he is venerated in a very significant way on Iorras Aithneach (Iar Ros Ainbthech – Western Promontory of the Storms), the Carna Peninsula in south Connemara. His ecclesiastical feast day is listed in O’Hanlon’s Lives of the Irish Saints as being on September 28 and yet Connemara fishermen also perform an intensely secular patrún or pattern in his honour on their turas or pilgrimage to the island on the 16th July every year, weather permitting. In addition to the Oratory church on the island there is a church dedicated to him in Moyrus and also a Holy Well. 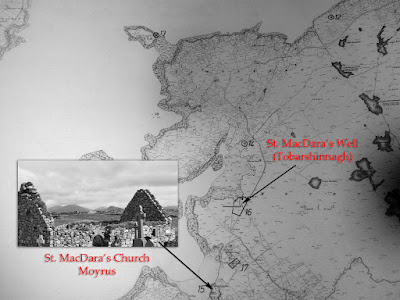 Not bad for an almost unknown saint. 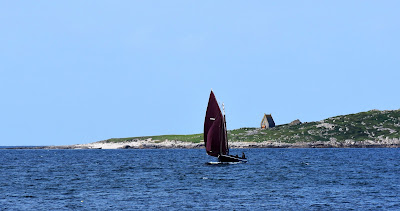 Tradition associated with St Mac Dara meant that any fishing boat passing through the sound between Masson Island and MacDara had to lower their sails three times (modern boats with outboard motors still cut their motors in respect of the tradition) otherwise bad luck would hit them. 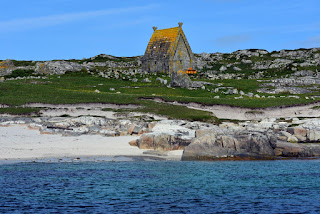 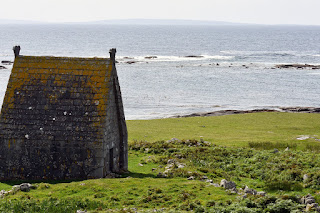 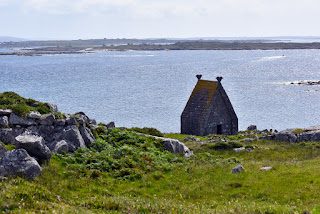 His given or forename Sionnach means fox, but Tim Robinson in his book, Connemara – A Little Gaelic Kingdom feels it should be Síonach which means a storm or stormy weather, and very appropriate as MacDara is one of the two saints associated with the Iorras Aithneach (of the storms) peninsula.

What is most likely is that Sionnach MacDara was a monk or cenobite in one of the early or mid-6th century St Enda’s, St Brecan’s or St Ciaran’s monasteries on Inishmore of the Aran islands. St Enda is considered the father of Irish monasticism and his foundations followed the asceticism of the Egyptian “desert Fathers”, living in community but with a life dictated by manual labour, study and prayer. St Ciarán Mac an tSaeir (of Clonmacnoise fame) is the other major saint associated with the Conmaicne Mara tribal area of Ioras Aithneach and perhaps this points to MacDara being a cenobite in his Inishmore monastery and they may have left the Aran islands around the same time, circa 541 CE, with MacDara heading to establish his “hermitage” island off Mace Head and Ciarán joining Senan on Scattery Island at the mouth of the Shannon before moving inland and founding Clonmacnoise. 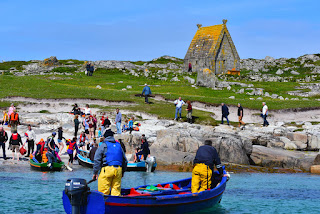 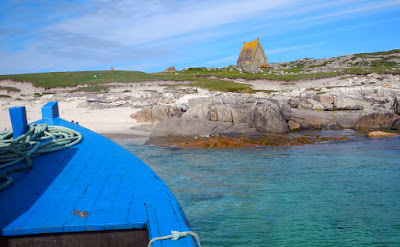 Landing at Aill na hIomlachta
(The Rock of the Ferrying) 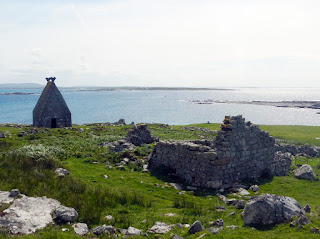 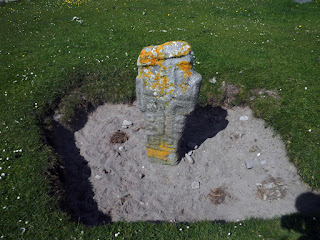 The 6th century saw the rise of the Irish “island hermit” tradition, such as that seen separate to the main complex on Skellig Michael (see Rihla 63) on the south peak; on Church Island near Valentia, Co Kerry; on Inismurray in Co. Sligo; or on High Island off NW Connemara where cenobites wanting to remove themselves from the community moved to almost inaccessible islands to become “Green Martyrs” (as distinct from Red Martyrs who were killed for the “cause” – very few instances in early Christian or pre-Viking 9th C Ireland) . The difficulty is often that these type of ascetic hermits then attract a community to themselves hoping to partake in the holiness and this is what appears to have happened on St MacDara’s Island. 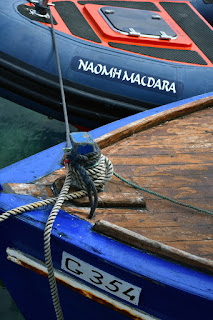 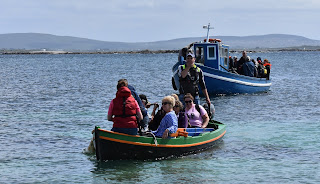 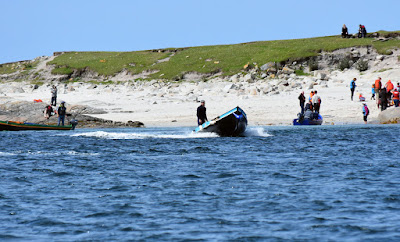 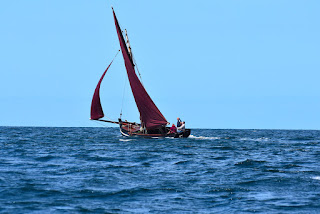 The oratory, which is a corbelled stone roofed rectangular church was beautifully restored by the OPW in the 1970’s, a restoration first mooted by R.A. Macalister in a paper presented to the Royal Society of Antiquaries of Ireland in 1895, following his visit to the island, “A very little outlay would put the whole structure in sound state, and doubtless, preserve it for another 1200 years.” 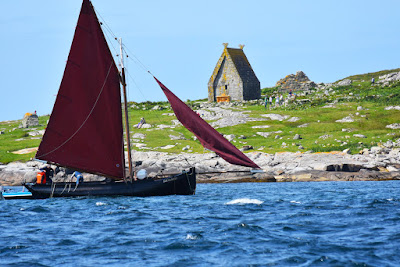 Of note Macalister in his visit, found lying face down one of the carved finials that previously had been attached to the apex of the east gable end. The native fishermen of the 1800s considered the carved head in the centre of the stone to be that of St. MacDara himself. This finial (and presumably the other at the western end) subsequently went missing and was nowhere to be found when the OPW went about restoring the Oratory. There is some difficulty in accurately dating the church with some authorities believing that originally the roof was a wooden construct and that sometime later, perhaps after the main Viking incursions had settled down, the roof was remade of more weather resistant (and available) stone. What is important is that “mouse-ear” carved finials were a feature of early Christian monastic gable-ends as depicted in the Temptation of Christ in the late 8th C Book of Kells. 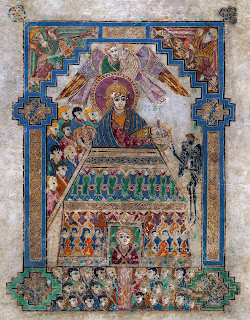 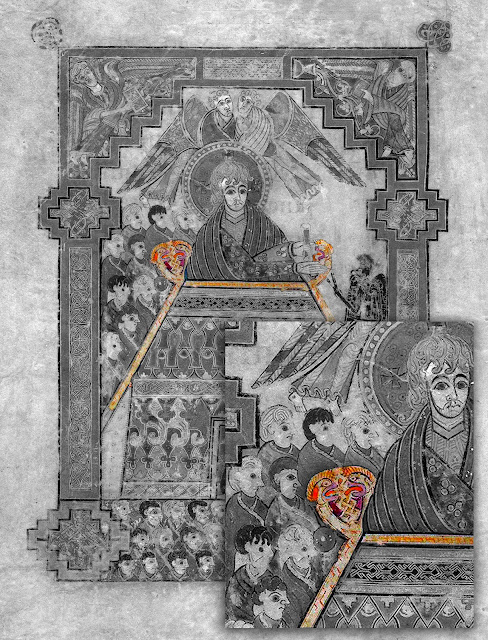 The carved finials as depicted in the Book of Kells. Finials are decorative carvings or pediments placed at the apex of towers (like a cross on a church bell tower or a crescent moon on a mosque minaret), or on the gable end apexes. 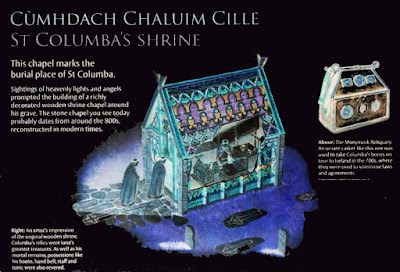 The carved gable-end finials were also a feature of some early “chapel-like” reliquaries such as the Monymusk casket of St Columba and indeed the gable struts of early 3rd or 4th century BCE Germanic North Sea wooden longhouses may have influenced the design as well as being the direct forerunner of the wooden gable-end cross-beamed curved apexes of the Scandinavian longhouses. What is not in dispute is that the replacement finials commissioned by the OPW are very fine carvings and are weathering very well. 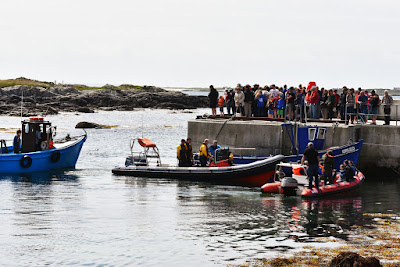 I went to the island on the 16th July this year, landing with the first boat of the day. The festival is now called Féile Mhic Dara and this year I reckoned about 1200-1500 people made it to the island and with the marketing of the Wild Atlantic Way being such a success the numbers are only going to get bigger and I suspect that at some point the traditional and “good-humoured” free ferrying of pilgrims to the island by local fishermen (remember to bring your own, or borrowed, lifejacket flotation device ­ – not mandatory but important) will come under pressure. 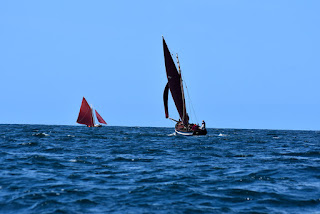 Unfortunately I was on call and had to head back to the mainland just before the mass began and I was unable to observer how many people still might have maintained the ancient tradition of a seven times circumambulation of the chapel and the placing of seven pebbles on the altar. I had hoped to see this done, and perhaps ask a participant why he or she still did it. As a custom it would echo the penitent tawaf circumambulation of the Kaba in Mecca, (and perhaps also the Stoning of the Devil) and be an echo of the Middle-Eastern tradition of Early Christian monastic communities that gave rise to the stylites of Syria and the island hermits of the west coast of Ireland such as Sionnach MacDara. 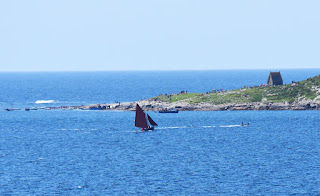 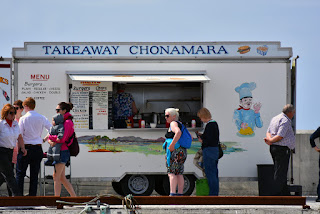 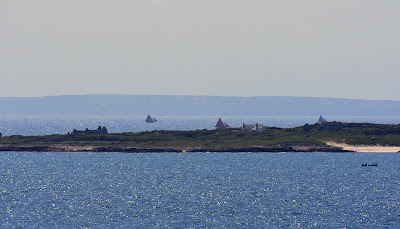 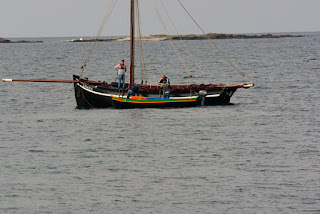 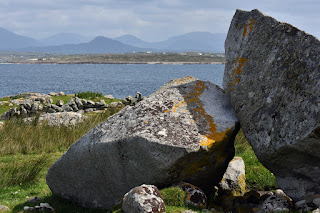 Even without this oblique association between the patrúns of East and West I found the geography, the historical context, the convergence of the Galway Bay hookers at the small harbour, the gathering of fishermen’s families from all over Connemara speaking Irish, the gathering of the sky and sea on an ancient landscape, the acceptance of tourist pilgrims, and finally the architecture of the conversation between mankind and God absolutely fascinating, all of them speaking to a distant time and place… in the now. 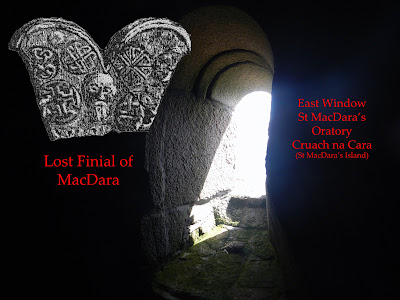