Rihla (Journey 2): Copenhagen, Denmark – I AM A DOUGHNUT

This Rihla is about Copenhagen.
I, like many others, when watching what up to then had been a perfectly stage-managed inauguration process felt for Barrack Obama when the Chief Justice of the United States fumbled the formulaic sequence of the Presidential Oath. Obama hesitated, like a child in a school play who has practiced and practiced for the moment but who has to rely on the prompt of another character to begin to utter his own words. Obama, characteristically serene, maintained his poise. I suspect if there had been anything to hand but the Lincoln Bible it would have been flying in Robert’s direction. Afterwards I was reminded of another time and place when a mismatch of words resonated in my brain. The plane was on its final approach to Copenhagen airport.
I am a doughnut, I remembered thinking, feeling the sudden change in cabin pressure suck a hole in my eardrums. Swallowing hard I had looked up from my newspaper, and stared out the window to watch as the plane dropped out of a puffball sky, and banked southeast over Oresund. Returning to the paper, I had wanted to finish the obituary of Robert Lochnar, John F. Kennedy’s favourite translator of all things German, and his voice coach for the famous line inserted into the Berlin speech in 1963 at the height – or depth – of the cold war. Kennedy’s pronunciation did not leave his coach down whereas the syntax did. The inclusion of the article ein in Ich bin ein Berliner meant that Kennedy had in effect said “I am a doughnut”. Berliner was the local common word for that particular type of pastry.
I remember smiling the stupid smile of secret associative thoughts and got ready for the landing. When you exit a plane in Copenhagen for once in your life you know exactly where you are. Each landing slot has its longitude and latitude displayed in degrees, minutes and seconds.
I am a publisher, I reminded myself as I got into a taxi and headed for Chester’s Bogcafe on Strandgade in the Christianhavn section of the city. More specifically I was the publisher of another Kennedy, Thomas E. Kennedy, and at that time was in Copenhagen to launch the second of his planned quartet of novels set against and upon the backdrop of life in that city. Recently I was delighted to hear that Bloomsbury are to re-publish the Quartet over the next four years, simultaneously in the States and the UK. This will deservedly bring Tom’s fantastic writing to a far greater audience than our small company would ever have been able to achieve. 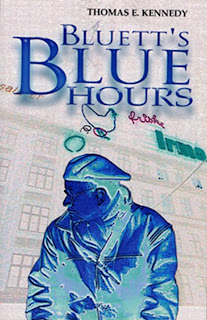