This rihla is about Wilpena Pound, Australia.

The 25th November is the anniversary of the birth of John Flynn in Moliagul, Victoria, Australia. John who? The Rev John Flynn, a Presbyterian minister was the founder of the A.I.M Aerial Medical Service in 1928, which subsequently evolved into the Australian Aerial Medical Service in 1934, the Flying Doctor Service in 1942 and ultimately the Royal Flying Doctor Service in 1955. John Flynn died of cancer in 1950.
The first aerial medical service took off from Cloncurry, Queensland in a fabric De Havilland bi-plane on the 15th May 1928 to be greeted by 100 people 85 miles away in Julia Creek. In the year up to the 30 June 2009 the RFDS flew 24,000,000 km, serviced approximately 247,000 patients and conducted nearly 37,000 medical emergency evacuations or about 100 evacuations a day across Australia. 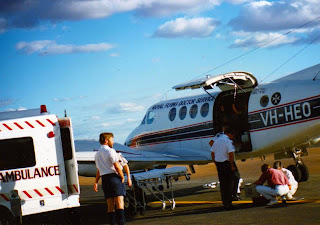 This is where my nostalgia comes in. Between 1989 and January 1991 I was based in Adelaide, South Australia in the Queen Victoria Hospital (sadly no more) and was one of the on call-obstetrician/neonatologists for the evacuation of maternity and neonatal patients to Adelaide from places as far away as Alice Springs in the Northern Territory and Broken Hill in Victoria. The on-call air service rotated between the St John’s Ambulance air wing and the RFDS and the calls could come at any time, day or night. Night evacuations in particular were an extremely nerve racking experience as you dropped out of a perfectly beautiful, star-filled sky to land on uneven packed earth airstrip in an Aboriginal homeland. I always feared that one of the many feral camels that roam in central Australia would choose that particular moment to cross the strip and I admired greatly the skill of the pilots and their sang-froid.
Australia is a beautiful country inhabited by probably the most hospitable and welcoming people on this planet. It is however a coastal strip of sunshine development and opportunity surrounding an inner land and islands where some 400 Aboriginal peoples (2.6% of Australia’s population) often live in dire poverty and neglect. I had never medically encountered syphilis or leprosy or terminal T.B. until flying into some of these homelands with the RFDS and some of the encounters still haunt.
Many Aboriginal groups have a well-developed Avoidance-Language when in the company of taboo relatives. It often struck me when I was there that there was an even greater use of Avoidance-Language on the part of white (of settler and convict origin) Australian officialdom when confronted with the taboo subject of Aboriginal rights. Things have significantly improved in the last 20 years but there is still some way to go.
In any event the RFDS is a service to be admired and supported. On the 16 November tickets go on sale for one of the most spectacular charity events (far better than the Rose Ball in Monte Carlo) you are ever likely to attend. It takes place in Wilpena Pound in February 2010 in aid of the RFDS. The Pound is a natural amphitheatre in the Flinder’s Range at the end of the ‘bitumen’ (sealed road) 429 kilometers from Adelaide. The black tie event with dinner and starlight and music and dance announced by the sunset is to….is to know you breathe. 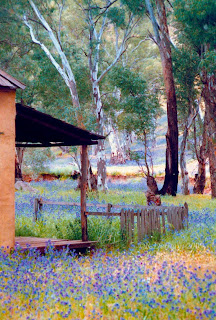 An Abandoned Homestead near Wilpena Pound, South Australia.
And in the sky somewhere that night an RFDS team is evacuating and saving a life, a family, a community beyond the bitumen.
Further Information: http://www.flyingdoctor.org.au/News--Events/Events/?ItemID=6&count=1
Posted by Roger Derham at Thursday, November 12, 2009