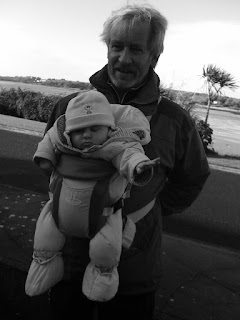 Papoosed
A short whimsical blog. I suited up this morning (papoosed ) to take young grandson Leon and our dog across the tidal flats to the woods on the far side of the inlet that we live on. I know that aging has various effects, young Leon is quite light, but the presence of a papoose on my chest began to exercise muscles – and memories – of days gone by.
On the physical side alone one change those years have wrought is that there is now a reliance on needing to see where you place your feet, particularly when descending (where once rhythm and an innate ability to regain balance existed, and I am not just talking about dancing), and the papoose makes this impossible. Making my way down to the seashore on a slippery decline that is negotiated weekly without too much concern suddenly became a major hazard to the health of young Leon, and thoughts of having to explain any injuries to his parents rattled in my brain. 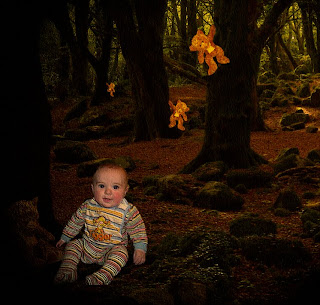 Young Leon and the Bears
On the mental side, the woods when reached also brought home the other changes of aging: being unable to recall the exact words of the nursery rhymes you had heard as a child and also sang (frightened!) to your own children. On a beautiful late Autumnal day I launched into Leon’s right ear Teddy Bears’ Picnic but for the life of me could not remember the fourth and fifth lines. The poor child is now probably scarred for life by the incoherent rendering. 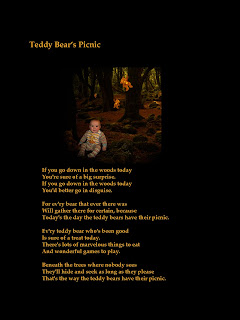 The Words
Teddys’ Bear picnic, composed originally as instrumental music by John Walter Batton achieved its greatest fame when lyrics were written by Northern Ireland songwriter Jimmy Kennedy (of Red Sails in the Sunset fame) in 1932 and sung by Val Rosling.
I have always loved the song, even if the bears escape me.
Posted by Roger Derham at Sunday, November 15, 2009