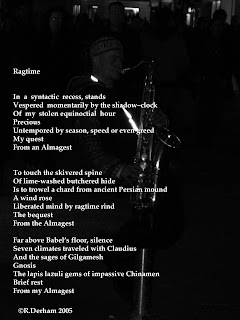 Syntactic Musings
I am reading at present the very accessible and very thought provoking book A History of Language by Stephen Roger Fischer. In describing the evolutionary path of human communication he points to the development of syntax as being the most important attribute of that development. Yes, he points out, animals, birds, and insects do have a lexicon of ‘words’ which are communicated in different ways i.e. phermones, wing-rubs, sonar pulses etc. but as he describes it ‘choreography does not replace articulation’. Language development in humans, he attests, is a product of an evolutionary ‘cerebral sense of belonging’ of words being together. And yet in our modern world the historical development of syntax-rich ‘daughter languages’ to a dominant language (English in the main at present) appears to have foundered in the very abbreviated and very accelerated world that Twitter and Texting language have brought us to.
Perhaps if language was to be analysed from the listener’s perspective – or sense – rather than the more usual articulator’s perspective then perhaps we should divide the ‘cerebral sense’ of synthetic (rather than syntactic) Rap, Twitter, Techno and Text language into the categories of Ab-sence, Non-sense, Sense-less, Sens-ual, and Sens-ible of their various constructions.
This brings me to a new word to perhaps describe its constrained development: Imposense.
Well not quite a new word. In Googleworld there is an avatar or wandering web-soul using the name and some years ago a blogging French poet called Mysteriuse entitled one of her poems l’imposense. I have quoted it below because I really like the poem. She is no longer blogging so I have not been able to get permission for this but I did try to track the source. I hope she will understand. 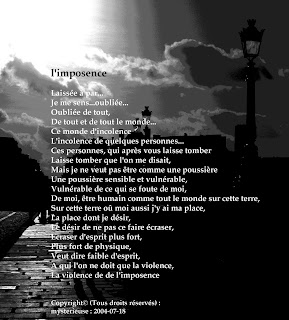 Mysterieuse's Musings
Imposense for me implies the notion of an imposed sense of understanding – a Foucaultian gridding – on the receiver of the language, which is dictated by the ‘rhythm’ rather than ‘rhyme’ of the communication, the tyranny rather than the freedom, the time constraints rather than the timeless words, and in a reversal of language evolution the choreography rather than the articulation. Equally at a quick glance the word somehow evokes confusion with Impotence and a failure to satisfy. Perhaps the impotence involved is the fault of the listener or receiver … or perhaps it is just me.
My imposense!
Am I making any sense? I like the notion of belonging that an apostrophe or dialect brings. Is language better for their loss? Does a sequence of nouns serve a more useful function than adjectival attachment? Will simplification and brevity reflect the reality of modern life (and the dominance of English) thereby allowing quicker communication in the now rather than having to deal with a complex communication from the past? The future will take care of itself? I am not so sure.
In the future, Fischer concludes, and I agree, the loss of language will result in a loss of identity, of protest, of diversity, and will result in alienation rather than universal brotherhood.
C u there! Ggg ..goo…goog….google …ga
.
.
.
Posted by Roger Derham at Thursday, December 03, 2009