Month’s Mind – The Torture and Death of an Iranian Doctor 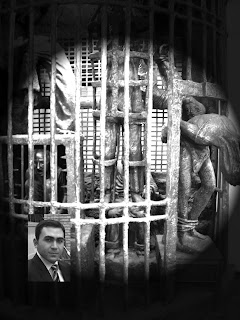 Dr Ramin Pourandarjani and a torture sculpture by
Ahad Hossein in the Azerbayjan Museum
of his home city of Tabriz, Iran.
In your thoughts please remember the life and death of Ramin Pourandarjani, and for his grieving family.
On November 10, 2009 Dr. Ramin Pourandarjani, a 26 year-old junior doctor from Tabriz, died in mysterious circumstances in the health unit attached to Tehran’s central prison. The authorities first said the causation was a heart attack, then they said poison and then finally suicide. Ramin was coming to the end of his compulsory military service and was about to emigrate to Germany to take up a fellowship in his chosen speciality. He had everything to live for and yet the authorities claimed he had committed suicide.
Ramin Pourandarjani’s life had been in dire jeopardy. In an earlier posting at the notorious Kahrizak prison facility he had looked after the detainees who had been moved there after being arrested during the street disturbances which followed the very disputed Iran elections in June 2009. Mohsen Ruholami Najafabadi was one of those beaten to death in the prison by the guards and the young Dr. Pourandarjani was brave enough, despite threats to his life, to issue a death certificate to that effect.
He later gave verbal and documentary evidence confirming this report to the Iranian parliamentary committee investigating the deaths in custody in Kahrizak prison and information coming out Tehran say that prior to giving that evidence he had been detained and threatened by Acting Chief of Tehran Police Brigadier Gen Ahmed Reza Radan, the man responsible for the Kahrizak facility. Radan was to call the torture and deaths at Kahrizak a ‘minor incident’.
A ‘minor incident’! The characteristic diminutive dismissal by someone who is pathologically evil. History teaches us nothing. Time and time again, in every society, in every era, sociopathic monsters are initially given power because of their ‘unique’ talents and willingness to suppress dissent to that society. That gift of power then reinforces the messianic pathology that courses through their veins. In years to come, when he is brought before the International Criminal court, Radan will protest as all monsters protest: ‘Who me? Just doing my duty judge. I rather be ringing chicken necks and doting on my grandchildren.’
Radan will be the reason the Islamic Republic of Iran will fail. Too late for the very courageous doctor-poet Ramin Pourandarjani! Please remember him. 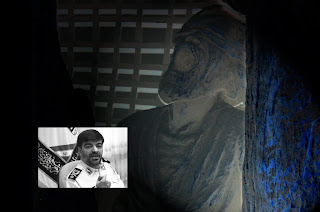 Brig Gen Ahmed Reza Radan and a torture sculpture by
Ahad Hossein in the Azerbayjan Museum, Tabriz, Iran.
On a more positive note the Censorship Research Centre in San Francisco, USA (and I hope to God they are as genuine as they seem and not a CIA-fronted organisation) is developing specifically for Iran an internet communication tool that can bypass the blockade the Iranian authorities presently exert. The below is taken directly from the home page of their website:
“Haystack is a new program designed to provide unfiltered internet access to the people of Iran. The software package is compatible with Windows, Mac and Unix systems, and specifically targets the Iranian government’s web filtering mechanisms.
Haystack is not an ordinary proxy system. It employs a sophisticated mathematical formula to hide users’ real Internet traffic inside a continuous stream of innocuous-looking requests. In addition to providing anonymity, Haystack uses strong cryptography, ensuring that even if users’ traffic is detected, it cannot be read. Trying to find and decipher our users’ traffic amidst all the other traffic on the web really is like trying to find a needle in the proverbial Haystack.
Once installed Haystack will provide completely uncensored access to the internet from Iran while simultaneously protecting the user’s identity. No more Facebook blocks, no more government warning pages when you try to load Twitter or access news sites -- just unfiltered Internet.”
http://www.haystacknetwork.com/
http://thereport.amnesty.org/en/regions/middle-east-north-africa/iran
Posted by Roger Derham at Friday, December 11, 2009