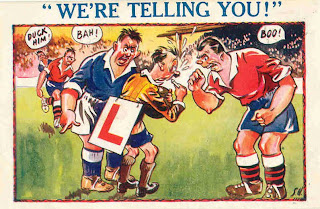 Recently a GAA referee called Willie Barrett was attacked by a fan while officiating at a hurling match in Tipperary. The incident was captured on a mobile phone and now is available on youtube.
(http://www.youtube.com/user/TheHurlingman)
Increasing violence directed towards referees both on and off the pitch has been a feature of soccer in particular but also Gaelic and increasingly rugby union. 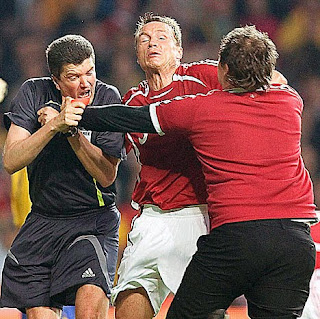 In August 2002 South Africa's Tri-Nations clash with New Zealand in Durban was thrown into chaos when a fan attacked the referee.The two sides were locked at 17-17 early in the second half when a fan wearing a Springbok shirt ran on to the field and tackled Irish referee David McHugh.
The fan - 46-year-old Pieter van Zyl - was escorted off the field by stewards but McHugh was taken off in a motorised cart clutching his shoulder and was unable to continue. 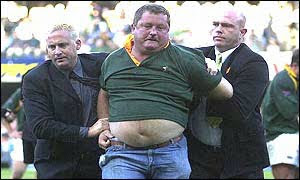 As a former referee I felt very strongly that not enough was done to protect referees from players or spectators by way of sanction and this led to considerable frustration. The following letter is one I penned to the President of a Dublin rugby club following a match I officiated in 2004. It is long winded and I never received either a reply or an apology, which says something about the how the sport itself was been run at the time. Thankfully at senior level there have been significant improvements in the behaviour, thanks in the main to video and television, and also to the facility afforded clubs and officialdom to conduct a ‘post-match’ citing if technology has picked up on serious incidents. There still are significant concerns for the way the game is coached at a junior level however and like soccer encouraging teams to continuously question the referee is a terrible precedent.
I have deleted the name of the club involved lest even at this remove I be accused of slander or libel.
31 October 2004
xxxx xxxxx Esq.,
President,
A Rugby Football Club,
Dublin. 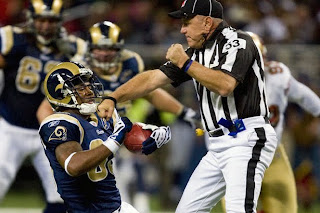