Tehran – The New Metaphysicians of Tlön 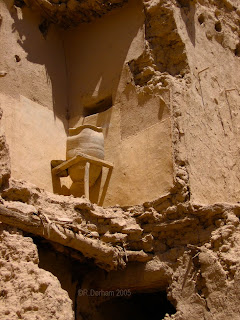 Destroyed Building in a Wadi of the
Hadramaut, Yemen

Somewhere in the 4th Century of the common era the Kingdom of Ubar, a kingdom which had existed from about 2000 BCE and occupied an area of territory approximating the land either side of the current Yemen-Oman border from the coast at Nisthtun to the Rub al-Khali and which controlled much of the frankincense trade at its origins, was destroyed in a tremendous catastrophe.
The people who suffered this destruction were the ‘Ad people and their chief city was called Iram, or the ‘place of the pillars’. The memory of Iram’s destruction in the folklore of Arabia remained very strong and 250 years later when the Prophet Mohammed (PBUH) revealed the Qur'an the figure of the Prophet Hud (PBUH) was to feature very strongly. Hud, the warner, was sent back to try and get his own people, the ‘Ad, to mend their ways or suffer the consequences. They did not and their beautiful and rich city of Iram was destroyed, for ever.
“And the ‘Ãd, they were destroyed by a furious wind,
exceedingly violent . . .”
Qur’an surat al-hãqqah (The Catastrophe); 69, v. 6
In the Qur'an the catastrophe was said to be a desert storm that swallowed up the city, however it is most likely that a tremendous earthquake was primary agent, as evidence from excavations on Iram show that it collapsed inwards rather than have been buried by sand.
(http://www.islamicity.com/Science/QuranAndScience/destruction/)
And so to today!
Due to increasing internal and external pressures being exerted on the political entity that is the Islamic Republic of Iran I get an overwhelming sense that the Iranian people, caught within this ‘powder keg’, are being manipulated even further. Recently, to heap further misery upon them, a cynical medieval religious fermentation of an apocalyptic vision of impending doom in Iran is being exercised. In an extension of the Qur’anic Prophet Hud allegory Ayatollah Aziz Khoshvaqt, one of Iran’s senior clerics, has warned Tehrani’s that their overt vices are inviting disaster and that a God sent earthquake is imminent and is coming to destroy them,
"Go on the streets and repent for your sins. A holy torment is upon us. Leave town."
Yet another cleric, Hojatoleslam Kazem Sedighi has also warped this message and almost imitating another Qur’anic (and Biblical) revelation about the Prophet Lut and the city of Sodom,
“(We also sent) Lut (as a messenger): behold, He said to his people, "Do ye do what is shameful though ye see (its iniquity)? Would ye really approach men in your lusts rather than women? Nay, ye are a people (grossly) ignorant! But his people gave no other answer but this: they said, "Drive out the followers of Lut from your city: these are indeed men who want to be clean and pure!" But We saved him and his family, except his wife; her We destined to be of those who lagged behind. And We rained down on them a shower (of brimstone): and evil was the shower on those who were admonished (but heeded not)!”
Qur'an 27:54-58
has declared that “Women who do not dress modestly lead young men astray, corrupt their chastity and spread adultery in society, which increases earthquakes.”
What a disgraceful ignorance! If the earth moves for you you must be sinning!
Jorge Luis Borges summed up the shallowness of this untruthful type of base approach in Ficciones when he wrote:
“The metaphysicians of Tlön are not looking for truth, nor even for
an approximation of it; they are after a kind of amazement.” 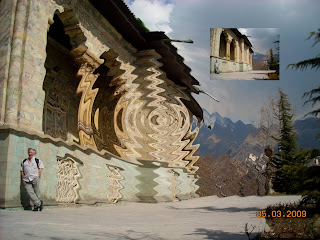 A Tremor in the Suburbs of Tehran
The Truth! 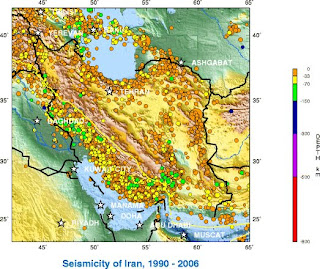 Tehran, like San Francisco or Istanbul, is in close proximity to major seismic fault lines and a significant earthquake occurring is not a matter of whether it will happen but when. It is not a question of modesty or chastity but tectonic movement. The problem facing Tehrani's is not immodesty but the density of population (13,000,000 in the metro area) and the quality of construction. The earthquake in Bam, Iran in 2003 killed 27,000 of its 43,000 official inhabitants. Over the years since then much thought has been given to moving the capital because of the risks of an even more serious disaster. The table below gives a list of some of the earthquakes that have affected the Tehran area over the last 3000 years: 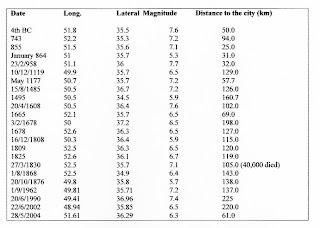 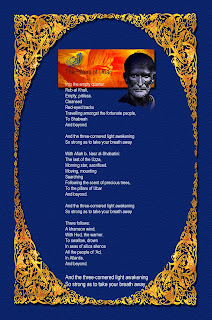