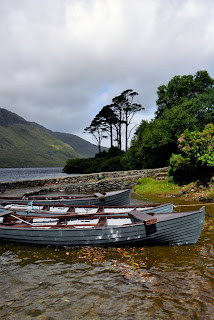 Doolough, Delphi, Ireland
Rihla (The Journey) – was the short title of a 14th Century (1355 CE) book written in Fez by the Islamic legal scholar Ibn Jazayy al-Kalbi of Granada who recorded and then transcribed the dictated travelogue of the Tangerian, Ibn Battuta. The book’s full title was A Gift to Those who Contemplate the Wonders of Cities and the Marvels of Travelling and somehow the title of Ibn Jazayy's book captures the ethos of many of the city and country journeys I have been lucky to take in past years.

This Rihla is about Delphi, Connemara, Ireland.
Last weekend I decided to try fly-fishing in Ireland and I headed out to stay with my friend Peter Mantle at his world-famous Delphi Lodge, north of Leenaun in Co. Galway. All day Saturday I fished Finlough and the Bundorragh River improving my technique if not actually attracting much action with that technique, a comparable experience it must be stated, to my adolescent efforts with girls. The conditions according to our gillie were perfect, a filling lake and a river in spate thanks to three days rain and overcast skies with a zephyr wind. Nobody told the fish however. At one point on the Turn Pool a large salmon (approx 10-12lbs) broached five feet in front of me and I swear to God he winked. 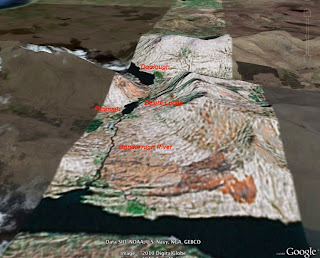 The Delphi Fishing Terrain
At about 6.30pm I was fishing the first pool on the river’s upper beat (the last for me) just before the bridge below Finlough. I was about to give up my quest when my fly was suddenly taken, my rod bent and a silver flash drew out the line. In my excitement and ineptitude in playing the fish I allowed it to lodge between two rocks before I could extract it. It was a sea trout (albeit a small one of about 8oz) and no matter how long I waited the fish would not revive. Apart from mouth to mouth I tried everything.
This was a problem. The exhilaration of my first fish caught on a fly replaced by the guilt of having a dead sea trout on my hands. All wild salmon and sea trout in the Delphi system are fished on a capture and release basis and in this aspect I had failed miserably. It is illegal in particular to be in possession of a sea-trout. 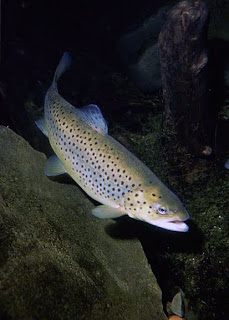 Sea Trout
Despite this I felt the fish should at least be recorded and brought it back to the lodge. The looks I got, when they saw the type of fish I’d brought in, from gillies and other fishermen, was akin I suspect to those given to some of our bankers or perhaps to Pierrepoint, the former state executioner.
It was a lesson learnt however and next year I promised to do better.
The following morning the wind was howling as I headed out on a walk from the Lodge towards Doolough lake to the north. As I reached the lake shore the wind appeared to be coming at me from both the south and the west at the same time and the waters were being whipped up in incandescent rage. At that very moment, close to the southern shore of Doolough, a vortex of water some 20 feet across began to form and spinning faster and faster became a whirlwind of spray that stood stationary for some two minutes or so before taking off like a hovercraft across the lake towards me only to suddenly evaporate against the road boundary wall.

An Eddy Whirlwind on Doolough

These eddy whirlwinds on the lake, caused by the shearing forces of opposite winds tunnelling off the mountainsides rather than from the thermal energy associated with waterspouts or tornadoes, are known locally as White Ladies. Sometimes they are known as Water Devils. In mythology, from the Limnades lake-nymphs of the Greeks, the Arthurian Lady of the Lake, to Chalchiuhtlicue of the Aztecs, there is a very long human history of spirits of the lake and they are not necessarily benign. 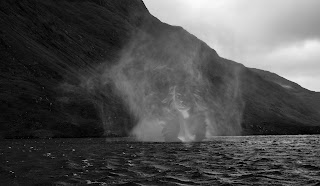 The White Lady of Doolough
As I watched the White Lady dance across the waters towards me I remembered Malory’s Lady of the Lake in Le Morte d’Arthur demanding from King Arthur the head of a knight responsible for killing her brother in exchange for the sword Excalibur.
Was that brother a sea trout I wondered?
Further Information:
Central Fisheries Board at www.cfb.ie/pr/ seatrout08.htm
Delphi Lodge at www.delphilodge.ie/
Posted by Roger Derham at Monday, July 05, 2010