This rihla is about Inishbofin Island off the west coast of Ireland.

In April 664 King Oswiu of Northumbria, at the instigation of his son King Alhfrith of Deira and his wife Queen Eanfled of Bernica (from the 7th century the former Brythonic kingdoms of Bernica or Bryneich and Deira made up the Anglo-Saxon Kingdom of Northumbria), called a Synod in Whitby to determine whether the Celtic (Ionian Gaelic) Church or Roman Church method of calculating the timing of Easter was to be the acceptable method in Northumbria. 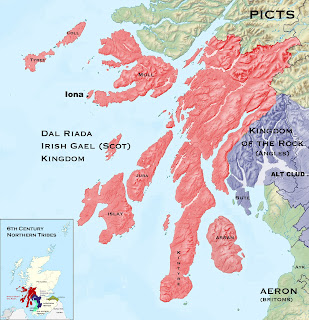 This was to be a crucial test for Oswiu as his Kingdom straddled the orthodoxy divide in England between the Roman Rite as promulgated by Augustine from Canterbury (and Patrick in Ireland from Armagh) and the old rite of the Columban missionaries from the fading Celtic Church powerbase of Iona in the Gaelic (Scots) Kingdom of Dál Riata (a territory approximating roughly to modern day Argyll in Scotland). Representing the Celtic Church was Colmán, the Bishop of Lindisfarne since 661, the third bishop after the founder St. Aidan. 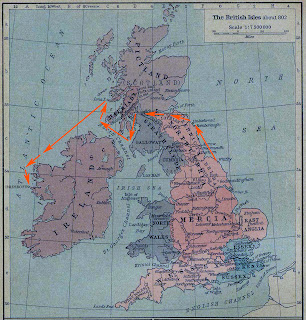 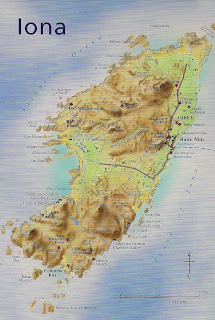 Colmán was from the Conmaicne Mara (Connemara) dynasty in Connaught on the western side of Ireland and had been educated and ordained in Iona before transferring to Lindisfarne. When King Oswiu decided against the Celtic Church reckoning of Easter Colmán resigned his see and took his disciples (Irish and 30 Saxon monks) as well as the relics of St Aidan and part of the famous Lindisfarne scriptorium, and left first for Iona, where they stayed for two years, and then onwards to establish a new monastic base on Inishbofin Island off the coast of Connemara. 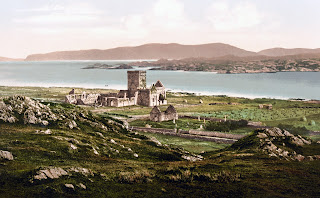 To Colmán Inishbofin (Island of the White Cow) must have been very like Iona both in size (6km long by 2km wide) and geography and he must have had had great spiritual hopes for its future and perpetration of the Celtic Church traditions. This was not however to be the case as simmering tensions between his Irish and Saxon monks forced Colmán to uproot his Saxon disciples and found a new monastery at Magh Eó on the mainland in 668. St Colmán himself was to return to the island and he died there in 675. 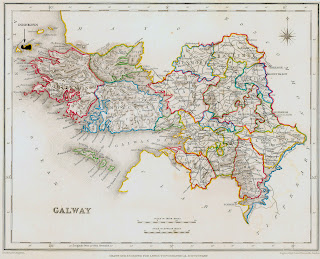 Location of Inishbofin Island off the coast of Connemara

Colmán’s monastery was destroyed in 1334 by Edward II’s Justice of Ireland Sir John D’Arcy (founder of one of the famous town tribes of Galway) in revenge for the rebellion in Connemara sparked by the murder of William de Burgh, 3rd Earl of Ulster in 1333. The historical association of Inishbofin with the Gaelic/ Dal Riada/ Iona Scottish resistance movement of Edward II’s nemesis William Wallace influenced this cultural destruction, a theme repeated throughout many armed conflicts in human history as a sort of 'cultural genocide'. It is the sort of 'tactical' destruction, currently happening in Syria, that the 1999 Second Protocol to the Hague Convention of 1954 for the Protection of Cultural Property in the Event of Armed Conflict was agreed upon to give enhanced protection to cultural historical sites in International Law (Ireland has not yet ratified the Convention) by defining five serious violations which are enough to establish individual criminal responsibility and by applying the Convention to both international and non-international armed conflicts.

There is a ruin of 14th century chapel on the site of the monastery and cemetery and a current archaeological excavation to try and unearth the foundation of the original monastery.

The irony of Inishbofin is that at the entrance to the harbour there is an early 17th Century barracks established by Cromwell to incarcerate Catholic priests (from specifically the Roman Rite tradition) for high treason under a parliamentary proclamation of 6 January 1653 which extended the 1585 English Act Against Jesuits and Seminarists (27 Elizabeth, Cap.2) to Ireland. I wonder if ever Colmán turned in his grave and smiled at their misfortune only a short distance from his Celtic Church retreat and his purpose for living.

There follows a series of pictures of Inishbofin Island: 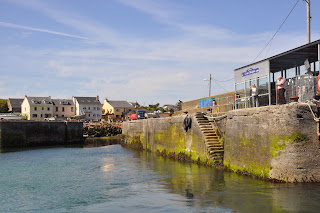 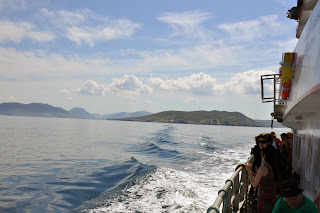 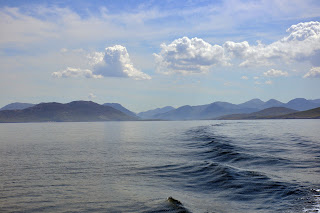 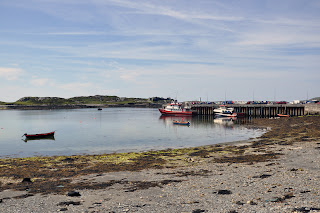 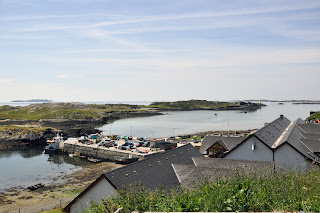 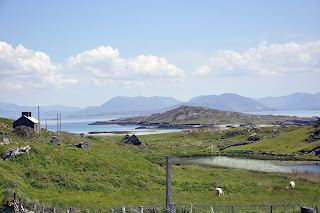 Looking East towards the Twelve Bens past site
of St Colmáns Monastery. 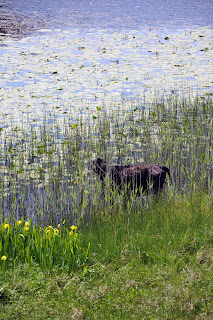 It was 25 degrees in the shade and not a 'White Cow' in sight. 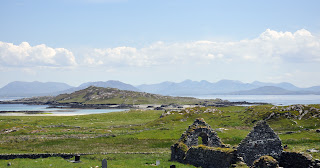 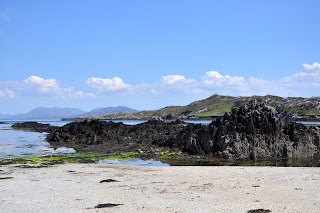 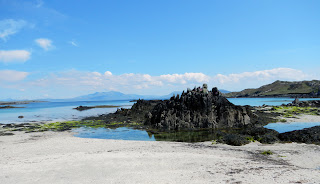 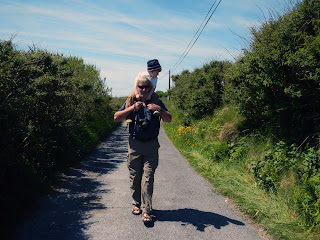 My Grandson Leon and I 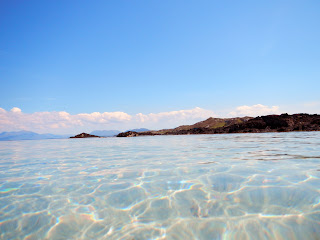 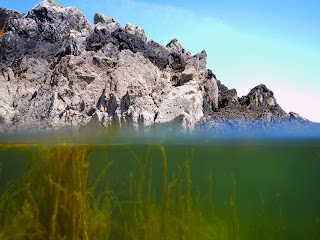 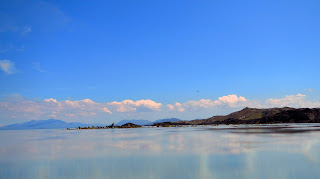 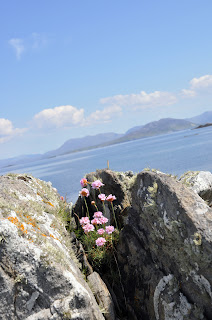 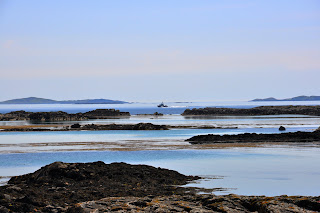 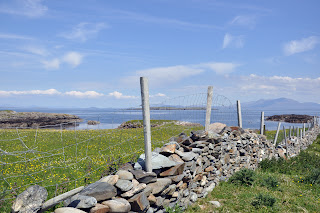 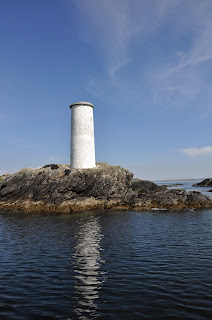 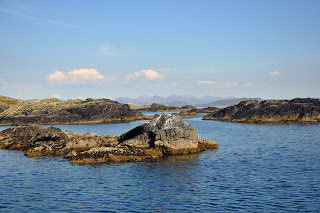 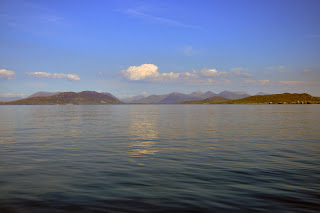 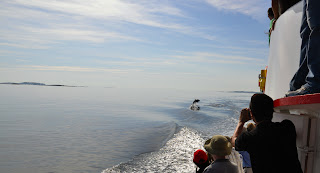 A pod of porpoises surfed the ferryboats waves
as we made our way back to the mainland.

All life should have a 'porpoise' to experience the beauty of these moments.