This rihla is about Baelo Claudia, on the southwest coast of Spain. 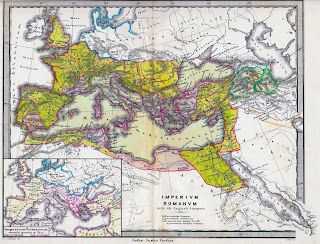 The Guadalquivir river (from Arabic al-wadi al-kabir “Great River) flows into the Atlantic Ocean via the Las Marismas marshlands at the Gulf of Cadiz in the south west of Spain. The Phoenicians founded Cadiz (Gadir “walled city”) about 1100BCE and they named that great river the Beatis. It was navigable at that time as far as modern day Córdoba (Carthaginian ‘Kart-Juba’) and when the Romans defeated the Carthaginians in the second Punic War (c.206BCE) they rapidly colonised the triangular valley area that spread south westwards from Córdoba which was centred on the Baetis river and was framed to the north by the Sierra Morena, the Baetic Cordillera to the south and the Atlantic to the west; all barriers great. The Romans were to name the province Hispania Ulterior Baetica. 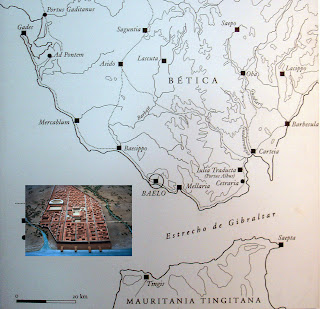 Taking the E5 Atlantic coastal highway south from Cadiz towards Tarifa you are immediately stuck by the absence of the concrete high-rise developments that punctuate every patch of Mediterranean coast between Gibraltar and the French-Spanish border north of Barcelona. This is the true attraction of the area and you wonder why?

Spain is a mountainous country surrounded by a strip of coastal flatlands from 2-10km deep, coastal flatlands that laid deserted on the eastern and southern shores for millennia because of the raiding activity of Mediterranean pirates, who then sold their human booty into slavery. From the Cicilian pirates of Roman times to the Barbary pirates of Algiers, Tunis and Sale-Rabat up the early 19th Century the meerest hint of a raid over 2000 years, sent coastal fisherman, salt-makers and farmers scattering quickly for their base villages in the nearby defendable mountains. It was this defensive migration of the population that left, apart from heavily fortified ports like Malaga, an undeveloped and untitled strip of costal land, to be the target of the modern developers who exploited the vacuum that previous pirates had created by menace. 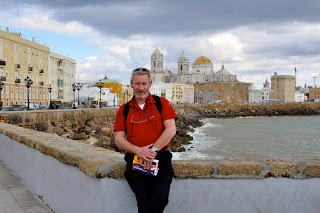 The south-western coastal strip in contrast has long been protected from piracy by the prevalent lee shore of Atlantic winds that made sea-borne raiding difficult (dire for pirates but delight for windsurfers!) and yet the lack of coastal urban development also has its roots I suspect in the response to piracy but for very opposite reasons. Cadiz has always been the pre-eminent naval base of Spain, even from earliest times when the Phoenicians plied their trade, and for every naval galley of Romans, or ships-of-the-line of the 16th and 17th centuries you needed sailors to man those ships. As a consequence urban development would not have been likely to take place along the nearby coast because any able fisherman available would have been quickly “press ganged” into the fraught and dangerous life of the naval services of the State. 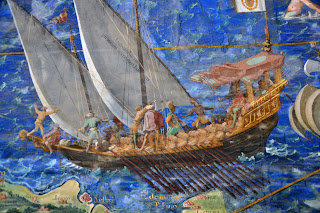 For this reason and the exposure to Atlantic moods the geography and land usage has not changed much from the Baetica of Roman times when the coastal route from Cadiz featured on such extant descriptions of journeys to the south and the east as the Antonini Itinerary, a rare descriptive summary of the way stations and towns on the major roads of the Roman Empire. And I thought of this as I turned off the E5 autoroute and winded my way the 10km to Bolonia beach and the car park of the interpretative centre of Baelo Claudia, an almost preserved ‘dolls house’ of a Roman outpost town.

The information detailed in the Antonini Itinerary had been derived from the survey of the entire Roman world commissioned during the dictatorship (and third consulship) of Julius Caesar, as part of his huge civil reform agenda including that of the calendar, after his return from Egypt about 46 BCE. As part of his land reform programme he had brought back with him from Egypt four Greek surveyors of the famous mathematical school in Alexandria, Nichodoxus, Theodocus, Polyclitus and Didymus, placed them under the operational command of the young general Marcus Agrippa, and delegated them to conduct a Descrptio orbis Romani. 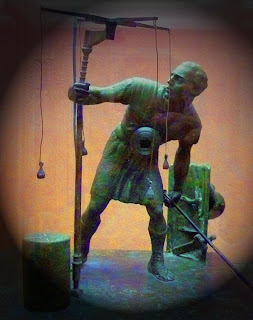 A Roman Surveyor and his Groma

The intent of Caesar to comprehensively survey the entire Roman empire had been prompted in the main by the mutiny of the IX Roman Hispanic Legion three years earlier when he had difficulty in settling the veterans of the disbanded legion after their conquests in Spain with the promised rewards of lands for their efforts. In order to overcome that particular difficulty Caesar had got four of his supporters; the praetors L.Roscius & A. Allienus, the army commander in Spain Q.Fabius, the governor of Sardinia S.Peducaeus and a Roman senator Maximilius to co-sponsor the land-reform law Lex mamilia roscia peducaea alliena fabia in order to facilitate the urgent settlement.

Caesar, along with perhaps Alexander and Napoleon, was both a pragmatist and a visionary. His world-view was shaped by the need to know of what was possible and he realised that the expanding legions of the Roman Imperium would demand greater and greater ‘reward’ settlement by victorius soldiers. He needed to now what was out there and where it was.

The Alexandrian Greek agrimensori with their gromas packed were dispatched by Agrippa to the four corners of the Roman world: Nichodoxus to the east, Theodocus to the north, Polyclitus to the south and Didymus to the west. Julius Honorius reported in his 5th century Cosmographia that the entire survey took 32 years (Nichodoxus’ work took 21 years 5 months and 9 days, Didymus’ 26 years 3 months and 17 days, Theodocus’ 29 years 8 months and Polyclitus’ 32 years 1 month and 20 days) and the information was ultimately presented to Marcus Agrippa and Caesar’s nephew-heir the Emperor Augustus about 13 BCE. Marcus Agrippa died shortly afterwards and it was his sister, Polla Vispania Agrippa who collated the information, and commissioned a map that was erected in the Porticus Vispania on the western edge of the Campus Agrippae near where the Piazza Colonna in Rome is now situated. 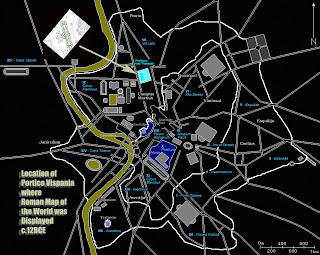 Of equal importance for the development of world geographical knowledge is that the Greek surveyors remained true to their Alexandrian roots and copies of all the information they had obtained also made its way back to their home school, information which Claudius Ptolemy was to fully utilize in his great treatise and world projection Geographica about 130 CE.

Baelo was founded about 200 BCE and was the port and emporium for trade with Tangier (Tingris) 30 Roman miles (1.375 km to a Roman mile) to the south across the Straits of Gibraltar in Roman Mauretania and was 53 Roman miles from Cadiz. When Didymus arrived to survey the town around 20 BCE it was thriving and had developed its own mint. By virtue of its economic strength its inhabitants were granted citizenship of Rome by the Emperor Claudius in 50 CE and the town was renamed Baelo Claudia.

Baelo Claudia however is I think unique. When Didymus came calling around c.20 BCE (or as I was two thousand years later) he would I am certain, as I was, have been amazed by the ‘dolls-house’ compact nature of the city where every aspect of the religious-legal-symbolic dictates of Roman urban planning had been incorporated into a town that was only 300 metres wide in an east-west direction and 600 metres long in a north-south direction comprising about 13 hectares. Baelo Claudia was an easy stopover to survey on his 26 year journey. 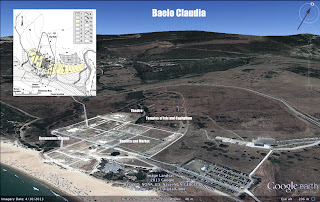 The Decumano Maximo, the main paved East-West road of Roman towns in Baelo Claudia measures about 300 metres from entrance gate to gate and borders a small but perfectly planned forum. There is also a small theatre, that could seat 1000 people, a private temple complex of Isis, and a public capitolium with the three temples in miniature dedicated to Jupiter, Juno, and Minerva. Besides all this squeezed into the small enclosed town are the obligatory public baths, a marcellum market-place and the basilica judicial palace where a reproduction statute of Trajan stands today, a Baetican-born emperor of the Roman Empire when Baelo Claudia was at its apogee.

Intersecting the Decumano Maximo is the normally colonnaded Cardo Maximo, the main north-south street in any Roman city. To give some idea of the miniature but perfectly formed scale of Baelo Claudia it measures about 300 metres in length, down from the temple of Isis to the Decumano. By way of contrast in another Greek-Roman town I visited in Syria, Apamea the colonnaded Cardo Maximo runs for 2.2 km. 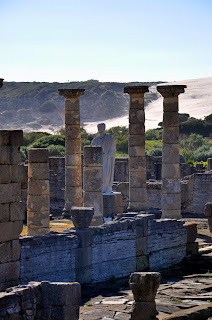 Trajan in Basilica in Baelo Claudia

Like a Victorian ‘dolls house’ Baelo Claudia is a microcosmic and very tangible time-capsule of everything that Roman city planning was and well worth a visit.

For some reason despite his 26 years of effort Didymus was subsequently eradicated from history when the medieval monks started drawing up their maps. In the bottom left hand corner of the famous 1290 CE Hereford Mappa Mundi there is a depiction of the Emperor Augustus commissioning the survey of the world from the Greek surveyors. The text of the edict that August is holding says, Exiit edictum ab Augusto Cesare ut describeretur huniversus orbis (In those days a decree was issued by the emperor Augustus for a registration to be made throughout the Roman world.)

In addition to getting the name of the commissioning Caesar wrong, Richard de Bello the author of the Hereford map depicts only three surveyors:  Nichodoxus, Theodocus and Polyclitus. Didymus for all his efforts is missing! A reason may lie in the fact that Hereford map is based on the tripartite T/O design which using the Mediterranean as a central division divides the map into three continents, Europe to the north, Africa to the South, and Asia to the East. It is displayed with the east or oriens to the top. Perhaps given this “God Inspired” map layout the medieval prebend of Hereford Cathedral de Bello could see no theological reason for having a fourth surveyor of an unknown continent to the west. Also Didymus in Greek means ‘twin’ and perhaps his information was ascribed to one of the other surveyors, who may or may not have been his twin brother. 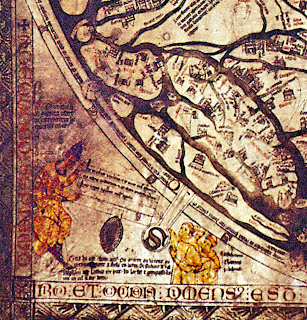 Caesar Augustus and the 'Three' Surveyors on the Hereford Mappa Mundi

I suspect all four surveyors made it back to Alexandria, where their efforts were rewarded 150 years later with the majestic work of geography of Claudius Ptolemy.