This rihla is about the ancient city of Palmyra, Syria and the poetry of loss. 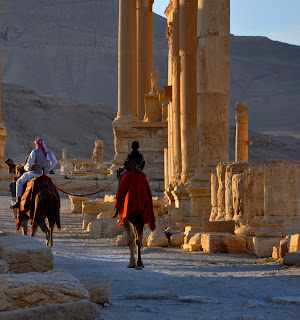 “I consider Fate to be like the stamping of a blind camel:
he whom he meets he kills; he whom he misses lives to grow old.”

The lines quoted above are from one of the famous Seven Renowned Odes or Mu’allaqât poems that make up the main corpus of the best of pre-Islamic era Arabic poetry. They were called the Mu’allaqât, or ‘suspended’ poems because tradition held that,

1. They were hung like precious gems to be considered in the Kabba in Mecca    or
2. They remain suspended in one’s consciousness after hearing them.

The second explanation is more likely as the tradition of pre-Islamic poetry was intensely oral and these poems were recited in public by the poet himself or by a rawi reciter whom the poet or sha’ir himself had trained. In Zuhayr’s case he had been trained by ‘Awas ibn Hajar, and he subsequently trained his son K-ab, who was later to recite poetry for Mohammed (PBUH), and who then went on to train al-Hutay’ah. This tradition of formally trained recited poetry was to manifest itself in the dispersal and recitation of the Quran at an early stage in the Islamic era, and even today in the training of the Huffaz. 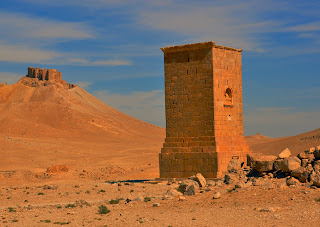 One of the consistent features of the Renowned Odes were the opening lines or nasib of the poems where the poet reflects on the deserted ruins of a remembered love or abode. Zuhayr began his poem with,

“Does the blackened ruin, situated on the stony ground between Durraj and Mutathallam, which did not speak to me…”

and in general terms this poetic device of establishing the context for the poem was known in Arabic poetry as al-waqfa ‘ala al-atlal or “standing by the ruins.” 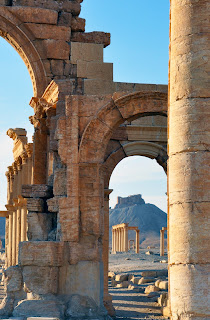 The meters of Arabic rhythmic poetry are known as “seas” or buhur and in an analogous way I have always considered the history of the Middle East, from the time of the Ziggurats of Sumer to the Burj Khalifa tower of modern Dubai, as having the rhythm of a sea crashing against man-made defences and hopes: tidal, sometimes calm, but more often violent, destructive, cleansing.  Following an earlier visit to Petra I wanted to see that other great mercantile city whose purpose and prosperity suddenly evaporated as if overwhelmed by the sea. 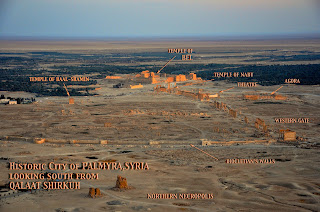 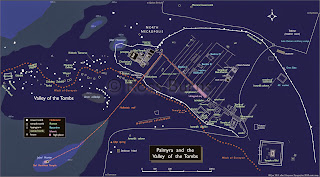 I visited Palmyra, Syria on the 7th October 2010, travelling the 220km on Highway No. 2 from Damascus. Tadmur, which is the ancient Hebrew and Greek name of the place, is now the name of the nearby new town which was established in 1929 after French Archaeologists cleared the ancient remains of their lean-to dwellings and dwellers. 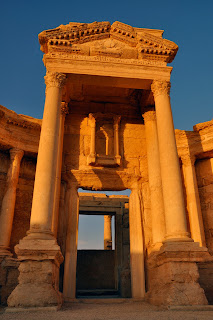 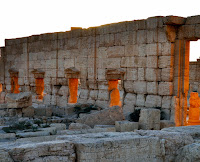 Palmyra has existed as a defined settlement from about 2000 BCE. Following the death of Alexander the Great it became a Hellenistic city under the Seleucids in 300 BCE. It was always primarily a trading city and was to reach its commercial and political zenith however in the years following the annexation of the Nabataean capital of Petra by the Romans in 106 CE by taking up most of the Nabataen trading monopolies. It became a Roman colony in 211 CE. 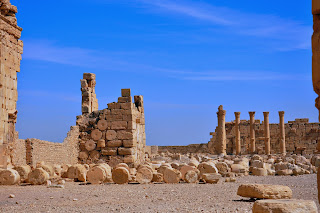 Under King ‘Udaynath (r.260-267CE) and in particular his wife Queen Zenobia (r.267-272), in an attempt to separate themselves from being a client-city of Rome, a brief but brilliant Palmyrene Empire was established militarily, influenced by Iranian court protocols, that stretched from Ankara in Turkey to Egypt. Zenobia who was to crown herself the first queen of Egypt after Cleopatra, was defeated by the Emperor Aurelian, allied with Palmyra’s traditional tribal enemies the Tanukh, in 272 CE and the Romans occupied the city. Zenobia was captured and brought to Rome and there is a great deal of uncertainty about her ultimate fate. 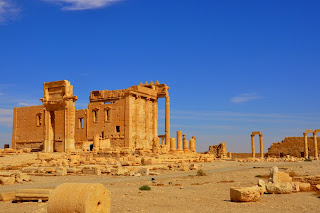 The following year however, following a rebellion by one of her relatives, Aurelian took the opportunity to retake the city, plunder it for its riches which he badly needed following his suppression of the Goth invasions and rebuilding of Rome's walls, raze it to the ground and in echoes of today allow his troops to club and cudgel to death much of the population. The Romans later regretted the fact that they had destroyed one of their ‘own’ cities and in particular a city that guaranteed protection on their desert frontier. The Emperor Diocletian attempted to repair and restore the city during his reign but the trading emporium that had been so beneficial to Rome did not recover, destroyed by Aurelian’s avarice. Political and cultural iconoclasm has been a feature of political revolution and religious revisionism from time immemorial. Our human psyche appears genuinely threatened when faced, literally, with the iconography of the generations that precede us and when allied to a political will and/or religious ferment we seem all too willing to want to destroy those idols, those depictions as if  some primitive way they could exert control over us. The Islamic State in Iraq and the Levant (ISIL) as part of its political and religious orthodoxy is determined to eradicate or erase 'faces'  from the past any in addition to rendering opposition to its remit impotent by sustained and propagandised acts of selective terror and depravity.

So it was before with the Mongols, the Nazis, the Khmer Rouge. 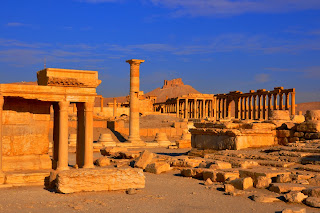 The poet Zuhayr wrote about war before ever a Muslim orthodoxy existed. He said,

“When you stir it up (war), you will stir it up as an accursed thing,
and it will become greedy when you excite its greed and it will rage fiercely.
Then it will grind you as the grinding of the upper millstone against the
lower, and it will conceive immediately after its first birth and it will produce twins.”

With ISIL, and lets assume with reasonable certainty that they establish so form of a State that will stretch from Damascus to Baghdad incorporating most of Syria (apart from Latakia) and North Western Iraq, at some point to protect themselves from within they will have to turn to governance; providing shelter, food, jobs, education, trade, utilities for the peoples they have subjugated. Poetry may even be allowed! However its existence, a bit like the very brief Palmyrene Empire might be brief. The “twin” wars promised by Zuhayr, from 'within' and 'without', will inevitably arise from within in opposition to ISIL's version of orthodoxy and without from a militant Shia Iran, a threatened secular Sunni Turkey, but most of all by a paranoid Israel. The tides of Middle Eastern history will continue to turn! 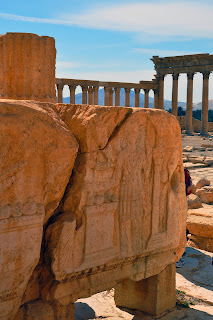 On the 21st May 2015 Tadmor/Palmyra fell to the ISIL forces and to date there has not been any reported destruction of the city's archaeological heritage. Truth be told from my observations, such as the already defaced heads shown above in one of Palmyra's tombs or of the statue of Aglibol, the lunar God near the entrance to the Temple of Bel there is very little of interest, particularly to satisfy an religious iconoclastic thirst, left in the ruins of Palmyra today for them to destroy. However the political iconoclasm has been sated where the streets are stained with the blood of ISIL-executed men, women and children whose “faces” were strongly associated, as either soldiers or officials, with the former regime.

For them there is only Zuhayr’s lament for the Fate of the people of Palmyra/Tadmor. Those that ISIL’s “blind” camel (read orthodoxy) have encountered have been killed, those that have been missed will hopefully live to old age. 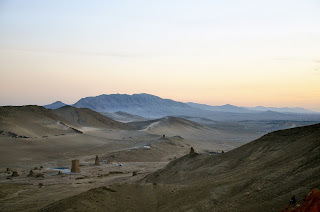