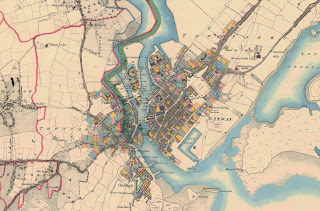 In 1991 when I first arrived to live and work in Galway there were occasions on Dock Road in the city when you would almost have to wear a mask as supplies of calcium ammonia nitrate fertiliser were deposited in a large warehouse at the end of Dock Rd. After almost 150 years of association of this location with fertiliser, however, the function and purpose of many of the commercial buildings on Dock Rd was to radically change with the redevelopment in the early 90s of the Galway Docks area. Following this redevelopment I decided to move my consulting rooms to the new building on the site of the former warehouse and as such was always interested in its evolving history. 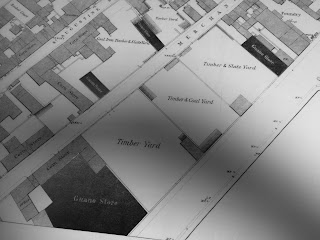 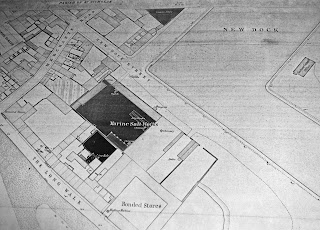 When one looks at the differences in the Docks area, between the Ordnance Survey maps of 1840 and 1873, in the city it is the appearance of three Guano warehouses in the 1873 surveys that really catches the eye. Indeed the maps are an evocation of the story of Guano itself.

Guano derives from the Peruvian Quencha language wanu or bird-manure. In 1802 the Prussian geographer and naturalist Alexander von Humbolt encountered the use of Guano from the Chincha Islands in Callao, Peru. He wrote about its use of a being a potent nitrogen-rich fertiliser and this soon stimulated the commercial exploitation of the resource.

The first supplies of Guano arrived in England in 1840 and a total of 182 tonnes were imported that year. By 1851 this had risen to almost 243,000 tonnes and continued to rise. Its value as a nitrogen-rich fertiliser was recognised very early in Ireland and by December 1842 a Robert Bell, of Gunsborough, Listowel in Co. Kerry was already reporting his very successful experiments on growth with Guano. 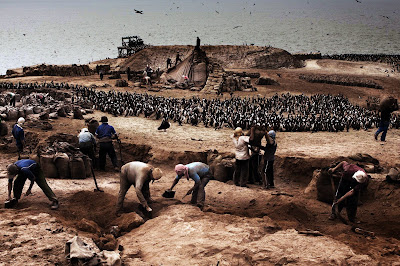 The profits to be gained particularly with the top-most or white guano were enormous. So much so that even by 1845 ships sailing from England to take delivery of guano were loaded with gypsum to admix and bulk-out quantities of guano or even using umber soil to mix and calling the brownish product ‘African Guano’.

The Peruvian and Bolivian governments had appointed as their sole importers of Guano to England W.J. Myers & Co. in Liverpool and Anthony Gibbs & Sons in London. The adulteration caused them serious concern and in order to protect (and advertise) the quality of their product commissioned the brilliant analytical chemist Dr Andrew Ure to conduct an analysis. He was effusive in his report of the very high levels of ammonia and phosphate in the manure and its benefit for agriculture. His results were incorporated in a book promoting the benefits of Guano and giving directions for its use published by the importers in March 1844. 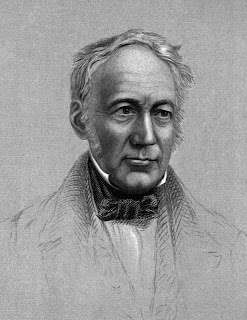 Ure later devised a simple method of determining the purity of guano by placing a sample on a red-hot shovel. Pure guano would just leave a fine ash of lime and magnesia whereas the ‘African Guano’ would leave a clump of sand.

The Royal Agricultural Society were so concerned about the exorbitant cost of guano that by 1852 they were offering a prize of £1000 for the development of an alternative nitrogen-rich fertiliser.

By the late 1870s much of the Peruvian guano deposits had been exhausted and the Peruvian and Chilian economy had switched to using Sodium Nitrate or Saltpeter from the Atacama desert. In 1909 Fritz Haber developed a process of nitrogen fixation (Nobel Prize 1918) at laboratory level and an industrial chemist Carl Bosch upscaled this to industrial production (Nobel Prize 1931) in what is known as the Haber-Bosch process both for fertilisers and of course munitions.

Anthony  Gibbs & Sons appointed as their agents for Guano in Galway a Sebastian Nolan, and on the back of this trade he became exceedingly wealthy and at one time the Guano-fuelled economy of the city was the biggest employer in Galway.

The Nolan family had always been merchants.  Sebastian Nolan's ancestors were Elizabethan settlers and had originally been granted lands and a castle in Crevagh, Kilmaine, Co. Mayo. These holdings were confirmed in 1585 and later a Thomas Nolan was given further lands owned by the Carmelite or 'White Frairs' Order closer to Ballinrobe. Thomas Nolan along with John Coman of Athlone had been granted in 1616 (Rol Pat 15 Jac I p.2 d.No.58) the licence to run the taverns and sell wine and spirits for most of Galway and Mayo. During the Commonwealth most of the Nolan's land in Mayo was settled on the Cuffe family and the Nolan's were moved to Ballinderry, in Cummer near Tuam, Co. Galway. The Nolan's gained land in Galway in the late 1790s through marriage into the Ffrench family of Portacarron, Knocknacarra, Galway. Sebastian Nolan inherited Castlemoyle near Tuam, (a castle that had come into the Nolan family by marriage to the Brownes of Castlemoyle) but moved closer to Galway in the 1880s to reside at Seamount Lodge near Blackrock, Salthill.

Sebastian Nolan was a cantankerous and testy character and none more-so when it came the development of golf in Galway.

In 1895 a Colonel H.N.F. Jourdain of the Connaught Rangers laid out a seven-hole course on the hill outcrop that stretches southwards into Galway Bay from Knocknacarra Cross and where I now live. Blake’s Hill is the proper name for the hill but over the years it has become more commonly known as Gentian Hill. Later that year in 1895 a formal club, Galway Golf Club was established and a clubhouse and further two holes added. A Capt Henley was the prime mover of this. When the landlord of the hill started charging a punitive rent for the land Sebastian Nolan, an early member of the Club, used his Guano manure profits to buy the hill. He became the first President of Galway Golf Club. 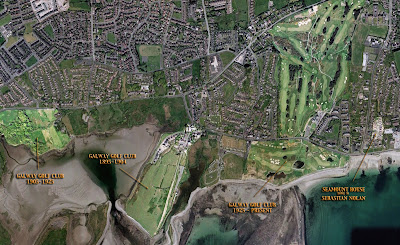 Sebastian Nolan considered the Gentian Hill golf course his fiefdom and in the early years was a generous benefactor and host. Col Jourdain however considered him a bore and stated that no-one wanted to play with him. In 1903 after an argument with the committee over the make–up in terms of handicaps for a foursomes event (they would not accept his dictat) he threw the club off his lands. Galway Golf Club first relocated to Barna but then later to its permanent home closer to Salthill.

The Gentian Hill golf-course became the County Galway Golf Club, a private course for Nolan and his friends. In 1907 he died of a heart-attack playing golf on the hill. The course and club also subsequently went fallow.

In death Nolan remained cantankerous however. A life-long bachelor he excluded most of his family from his will and left most of his wealth, and property (including the infamous Magdalen Asylum building) to the Sisters of Mercy. Despite a court case by the family to try and effect a reversal the will was upheld.

The Nolan family were used to disappointment however. Sebastian Nolan’s brother, Col John Philip Nolan of Ballinderry, Tuam and the Parnellite MP for North Galway was beaten in an election in 1906 by a dead man, Thomas Higgins.

In a strange twist of coincidences however Galway Golf Club found a permanent home on the O'Hara lands in Blackrock, Salthill very close to Sebastian Nolan's former residence at Seamount. The O'Hara's of Lenaboy, Galway were descendants of either General Charles O'Hara the Ist Baron Tyrawley(d.1724) and Commander-in-Chief in Ireland or of General Charles O'Hara (d.1802), the illegitimate son of James the 2nd Baron Tyrawley and Ist Baron Kilmaine (d.1774) and his Portuguese mistress. This General Charles O'Hara was the officer who brought Cornwallis' sword of surrender to George Washington at Yorktown at the end of the American War of Independence.

When James O'Hara died the titles Baron Tyrawley and Baron Kilmaine died with him but the Baronetcy of Tyrawley was created for a second time and bestowed on a James Cuffe in 1797. The Cuffes were the Cromwellian settlers who had been given the original Nolan estates in Crevagh, Kilmaine, Co. Mayo forcing the Nolans to move first to North Galway and ultimately Sebastian Nolan to Galway city itself. 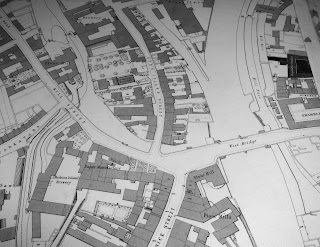 Although in overall terms of imports to England and the Continent the amounts of Guano imported into Ireland were small, given that the peak years of its production and importation coincided with the economic and human tragedy of the Great Irish Famine (1846), its arrival did further reduce the traditional harvesting of fresh seaweed to use as fertiliser but also as a consequence the income derived from the dried and burnt harvested seaweed Kelp industry. This made it even more difficult to survive the economic effects of the blight that affected the almost universally planted non-resistant strain of potatoes (the Irish Lumper).

It has been long held that the blight fungus, Phytophthora Infestans was most likely imported into Belgium with infected potatoes from Mexico in 1845. Another recent theory is that an Andean strain from Peru may have been transported alongside a delivery of Guano. Either way while the severe European drought of 1846 managed to halt the progress of the disease on the European mainland the moiste and wet conditions in Ireland accelerated its impact. 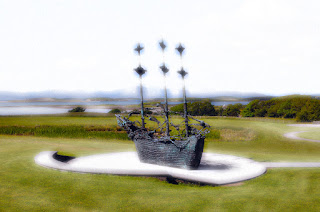 In echoes of today with the migration of people from sub-Saharan Africa and the Middle-East across the hostile waters of the Mediterranean the Irish set–sail in similar profit-driven ‘coffin-ships’ to a presumed better life on the far side of the Atlantic. On the Galway– New York passage alone between 1846-1851 69 ships transported 23,000 emigrants. The population of Galway county dropped from 440,198 to 321,684 between 1841 and 1851 as a consequence of starvation, death and emigration. In an ironic reversal of the westward emigration from Ireland, in order to mine the guano in the 1840-1870s indentured workers (slaves) from China were transported eastwards across the Pacific to Peru. Up to 100,000 ‘coolies’ were thought to have been transported and enslaved to service the sugar-cane and guano industries in dire conditions. It is estimated that about 4,000 Chinese workers alone died extracting Guano in their Gethsemane. The Chinese community (tusan) is still a very important part of Peruvian society having produced two prime ministers. 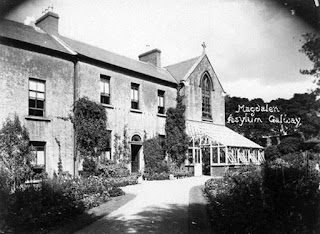 The Magdalen Asylum (Laundry) that Sebastian Nolan owned and willed to the Sisters of Mercy in Galway in 1907 had opened in 1824 and closed in 1984. For 160 years it was a Gethsemane for hundreds of women, abused in a similar fashion to the Chinese coolies that had mined the Guano that had made Sebastian Nolan rich. 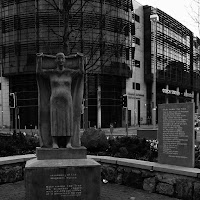 information handed down from my Grandfather was that a particular delivery of this Guano manure badly affected the Lumper generating a potent virus which quickly gathered momentum with rainfall.