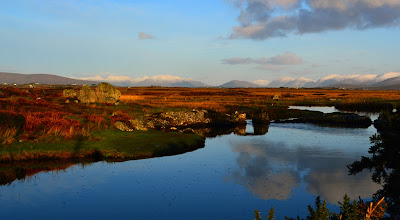 This is the fifth Rihla (see also: Rihlas 47,49,52 & 53) about the 300 or so quays and slipways of Connemara this time exploring those of the townlands of Muckanaghederdauhaulia and Camus in the parish of Chill Bhriocáin (Kilcummin), in the Barony of Moycullen, in the County of Galway. 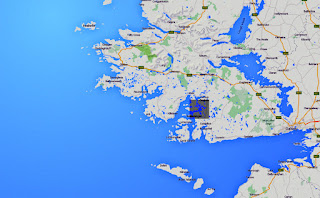 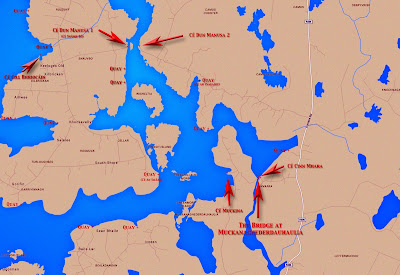 The Quays of the Parish of Chill Bhriocáin (Kilcummin), Galway.

Travelling the rutted roads and narrow boreens of Connemara, Tim Robinson’s Gazetteer and Map to hand, in search of the piers and slipways that define the relationship of that land with the sea – like the base pairs of double-stranded DNA – has in essence been a Knights Tour: an attempt to visit and photograph every such construction on the irregular chessboard that is the landscape of maritime Connemara at least once. My journey has been an open Tour because I have returned again and again to some locations, attracted by the light, the history, the tidal hallucination and not at all to some others, caught out by bad weather, missed turns and dodgy map-reading.

Predag Matvejevic in his book Mediterranean – A Cultural Landscape wrote, “The nature of a port is determined by whether it is formed by a river, chosen by the land or hinterland, or willed by the sea itself.”

On the 23rd June 1975 just before 8pm, in a room in his residence at 11 rue Simon-Crubellier, where on a small night table there was an ashtray with ‘Guinness’ engraved on it, Muckanaghederdaulhaulia was willed to the world by Bartlebooth, the central character of George Perec’s novel Life A User’s Manual (French title:  La Vie mode d’emploi first published 1978, English translation 1987), as to be one of the eternal 500 ports of the world that he would travel to – beginning with Gijon and ending with Browershaven – to paint in watercolours the seacapes that presented themselves. 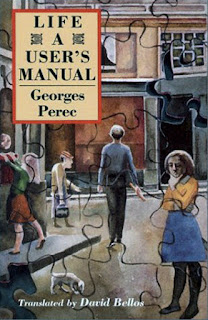 Georges Perec was an author associated with the Oulipo group of French writers and mathematicians who used the notion of a Knights Tour permutation to evolve new ways or new structures to express ideas and imaginations in literature. Ever since I was introduced to Perec’s writing, and to the wonder of the Connemara landscape, by Tim Robinson in his book Connemara – A Little Gaelic Kingdom; in the chapter he entitled The Bridge at Muckanaghederdaulhaulia, and Robinson’s description of his own "Road to Damascus" moment at the bridge, I have always wanted to visit this mystical or perhaps mythical place. 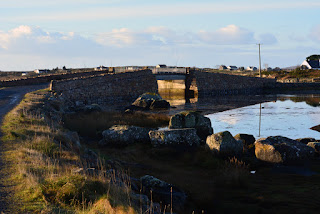 The Bridge of Muckanaghederdauhaulia
(Muicíneach idir dhá Sháile)
Perec came to include Muchanaghederdaulhaulia pier in his “500” ports to be painted because he considered it to be the port with the longest name in the world. Goodness knows what reference book or atlas he had consulted to actually discover the name. At the other end of the linguistic scale he included the port of U in the Caroline Islands in the Western Pacific.

For many years Muchanaghederdauhaulia was also thought to be the longest single-word Irish place name, or at least English version of that place name, but since 2005 as a name it no longer exists….officially. 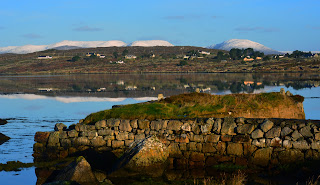 Cé Cinn Mhara
Just before 8pm on the 23rd June 1975, in the moments – allowing a decent interval for the spirit to take its leave – after his character Bartlebooth’s death, is the beginning and end of Perec’s novel, the big bang and vanishing point combined. At an equally pivotal moment just after midnight on the 28th March 2005, under the mandates of the Official Languages Act of 2003, a Placenames Order (An tOrdú Logainmneacha) came into effect and ensured that Muckanaghederdauhaulia sole official name reverted to its Irish origins: Muicíneach idir Dhá Sháile, an exact and more beautiful geographic description in language and intent of the small peninsula, shaped like a pig’s back that separates two tidal sea inlets and which juts out into the waters of Camus Bay. 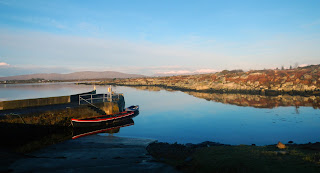 Matvejevic also wrote, “Some piers are like elongated ships: they await their ships so patiently that in the end they come to resemble them.”

Perec may, or may not, have been surprised that Cé Muckina (Muicíneach) pier does not really protect a bustling, busy port but it does project out into seascape that Perec’s water-colourist Bartlebooth would not have been disappointed in. To get there you drive/ramble north from Costelloe on the Furnace bog road and turn left about 5km; into the town land of Kinvarra. The “famous” bridge or equally famous pier/port is not signposted, and indeed the only signage apparent is that for MADRA; the Mutts Anonymous Dog Rescue and Adoption kennels which is located down a side-road that takes you to another quay. 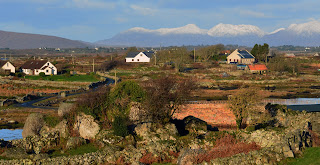 Looking north-west over
Bridge at Muckanaghederdauhaulia
Moving westwards you swing round and down a corner and first reach the old and now dilapidated pier of Cé Cinn Mhara before continuing on to the bridge beyond. A local told me that the quay is really called after his great-great grandmother who lived in the vicinity when the quay was being built. I missed hearing what he called it. 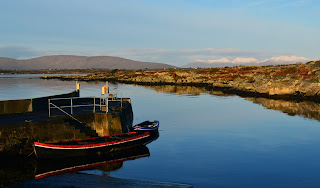 The original wooden footbridge of Muckanaghederdauhaulia was built in 1900 but collapsed into the sea in 1980 and has since been replaced by a single archway road bridge.

After crossing the bridge and turning right at the next crossroads with an alternate bog road back to Costelloe you then turn immediately left into a narrow boreen, gradually descending to the pier/port of Perec’s Muckanaghederdauhaulia where it exists as a snub-nosed vanishing point between land and sea, and shaped by both. 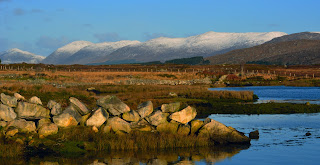 Edge of old slipway at the ford of Snámh Bó


THE FORD OF THE SWIMMING-PLACE OF THE COWS (Snámh Bó)

After returning back to the Furnace Road and travelling north you enter Camus town land and taking the next left turn brings you westwards along a twisting road and across a small bridge and slipway that separates Camus Iochtair (lower) from Camus Uachtair (upper). 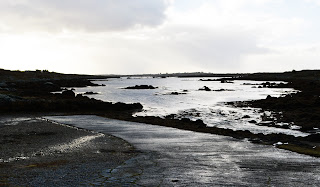 Cé an tSagairt (Priest's Landing Place) beside bridge
in Camus

This is not the natural direction of the road as the illustration below from an 1922 Ordinance Survey map shows where the road appears to peter out eastwards before it has connected with the Furnace Rd. 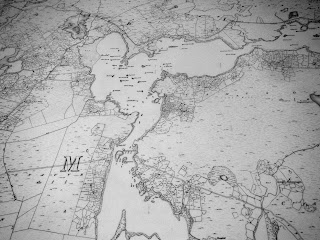 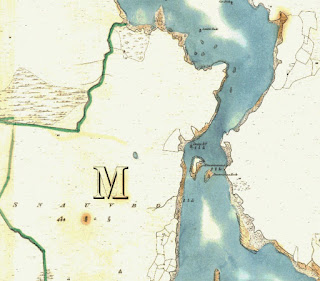 The Board of Public Works had taken over road building in Ireland in 1832. Then came the famine and a designated body the Congested Districts Board was established in 1891 to alleviate poverty in the west and north-west of Ireland. Part of the CDB's remit was the building of roads and piers in the under developed parts of Connemara and this included a road that ran from Cé Chill Bhriocáin in Rosmuc to Camus. This road appears, partially unfinished, in the updated 1922 OS map.

The reason for the road being there in the first place was probably to allow easier access for farmers and livestock men of the Rosmuc peninsula to get to the markets at Maam Cross and Costello. The area on the Rosmuc side had always been known as Snámh Bó or Swimming Place (Ford) of the Cows, and thus the road followed the ancient livestock trail. On the Camus side you reach a small slipway and a gutted quay with the abandoned shed of a curragh boat-builder nearby. Immediately ahead of you is a small island, the Island of Dun Mánas. 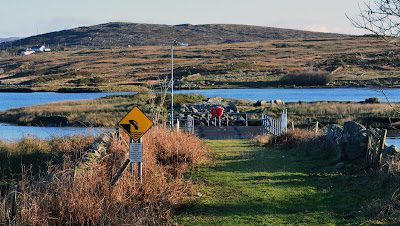 The unfinished Spinster's road on the tiny island of Dun Mánas off
the new Snámh Bó quay. (looking east) 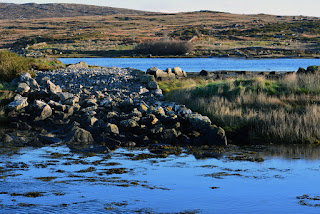 Close-up view of unfinished Spinster's Road on Dun Mánas Island
There is no fort or dun on what is a tiny island. When it is approached from the Rosmuc or western side you can see the remains of a stone road laid out upon the island. This roadway directly aligns with the newly refurbished Snámh Bó quay.  This quay of the “swimming cows” was originally a slipway (slightly to the north of the current quay) down which cattle were led and then made to swim across the ford to the slipway on the Camus side. 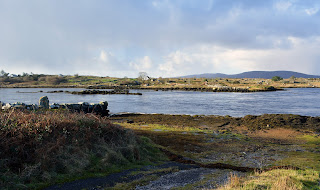 A local man, who lives in the house at the head of the quay, told me that the island of Dun Mánas was once owned by two spinster sisters, who lived nearby. They had an idea that when the roads were being built that the ford might be bridged. The Congested Districts Board contracted and paid the two women to carry and break rock to lay out a causeway on the island, much of which is still visible, but then cancelled any further progress towards a bridge when one of the women was found not to be fulfilling her quota of stones hauled. When J.M. Synge travelled through Connemara with Jack Yeats, on behalf of the Manchester Guardian newspaper,  he wrote in 1911,

"Then at a turn of the road, we came in sight of a dozen or more men and women working hurriedly and doggedly improving a further portion of this road, with a ganger swaggering among them directing the work... As we drove quickly by we could see that every man and women was working with a sort of hang-dog dejection that would be enough to make any casual passer mistake them for a band of convicts. The wages given on these works are usually a shilling a day.... I have been told of a district not very far from here where there is a ganger, an overseer, an inspector, a paymaster and an engineer superintending the work of two paupers only."

It is possible that Synge had heard stories of the two spinster sisters building the road of Dun Mánus Island!!!! 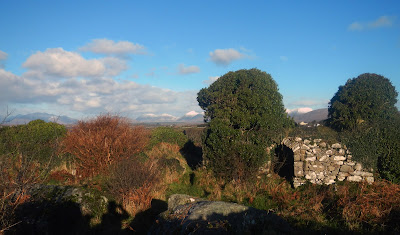 The quay of Snámh Bó links directly westwards with the old monastic church of St Brecan, after which the parish of Chill Bhriocáin – which includes Camus, Rosmuc and Muicíneach idir dhá Sháile –  is named. St Brecan, the Dalcassian saint of the Seven Churches of Inishmore on the Aran Islands and where he is buried, founded the complex in Rosmuc around 520CE. Below the church and burial ground is the very sturdy and picturesque quay of Cé Chill Bhriocáin. 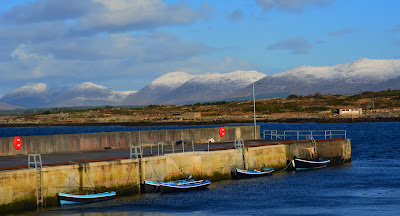 I left the parish and quays of Chill Bhriocáin, and my Knights Tour and for some reason the abiding image was not of the Bridge or Port/Pier of Muckanaghederdauhaulia but was that of the unfinished Spinster’s Road on the small island of Dun Mánas. It was and is the embodiment of Georges Perec’s Life A User’s Manual: a road to everywhere and nowhere, caught in a moment of time.

And the cows went swimming by…….

Reference.
Galway County Council Survey of Piers and Harbours.  A Record of 244 such places. 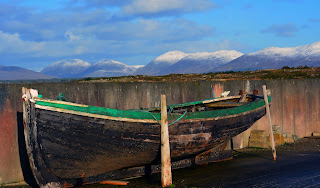