HAPPY VALENTINE'S DAY – THEN AND NOW 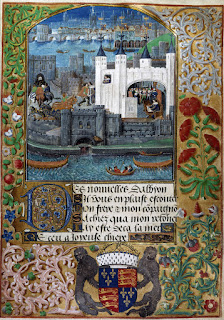 Illustrated manuscript of Charles Duke d'Orléans poetry showing
him incarcerated in Tower of London writing to his wife.
(Manuscript in British Library)

The first Valentine poem was thought to have been written by Charles Duke d'Orléans to his second wife Bonne of Armagnac around 1416 while incarcerated in the Tower of London. Charles had been found alive, buried beneath a pile of dead bodies, at the Battle of Agincourt on the 25th October 1415 and was only released in 1440. Bonne unfortunately died, 'without issue', sometime before his return around 1435. By his third wife Marie of Cleves (he married her when she was 14) Charles was to father the future King Louis XII of France. The first part of Charles' poem to Bonne reads: 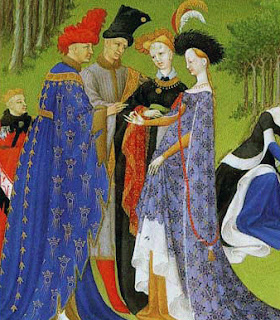 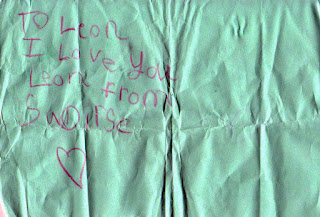 The most recent Valentine that I have come across is from the temptress Saoirse to my Grandson Leon aged 6. Crumpled up in his pocket mind! Had to be extracted! Wonderful!

I wish you all a very happy Valentine's Day. Spread the crumpling and the love! 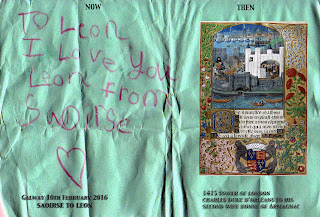