GALLANT AND GALLIVANTING IN COVID TIMES: TOCHT AND THE SACRED MOOD OF PLACES 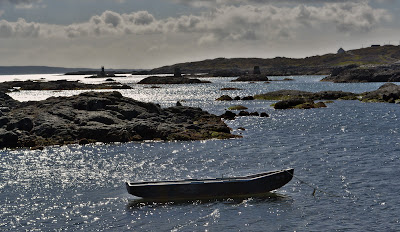 “tocht – a catch or stop in the throat from emotion, a silence. A small strangulation it is, the death strangulation, but a great stop it is, the stop of life. The death rattle is nothing, compared to the silencing of life.”
– Tim Robinson.

With an intensity of perception, an intensity of reflection, these lines were delivered in  an echtra, or rihla or travelogue that explored the etymology, toponymy, social tapestry and geography of a very Irish landscape – an exploration undertaken by a very English Yorkshireman. In translating Caitlín Maude’s poem “Dan” in his book, Connemara – A Little Gaelic Kingdom the author and nomad Tim Robinson pointed to the mechanics of a journey’s end, to a silence of stillness. His own quietness came in the past week in London, the tocht rómhór of a Covid-19 infection at the age of 85, two weeks or so after his wife and co-pilot in many of his meanderings, Mairéad had also passed on. He is never to come this way again, never to undertake another periêgesis, or a “one-foot-in-the-sea-and-one-on-shore pilgrimage around south Connemara, constant only to the inconstant coast”. He, and his maps, and his poetic licence have been a boon companion in my own journeys to the quays of Connemara (see links below) and an instructor via the medium of a language of landscape for my poor grasp of Irish, a far better múinteoir than those baton-wielding thugs of my schooldays.  He was, as Colm Toibín said of him, a writer who could capture the “sacred mood of places”. 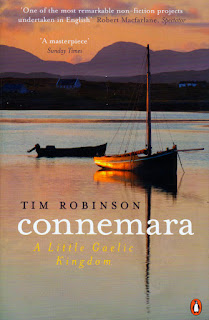 I am reminded by the Robinsons' loss, and by all of the other terrible losses that have occurred as a consequence of Covid-19 around the world, of my own mother Pamela’s death in 1999, at an age not much more than I am now. She died far too soon from acutely progressive fibrosing alveolitis, a rare respiratory manifestation of her autoimmune rheumatoid arthritis. It is a condition that also occurs in some Covid patients requiring ventillation. She had a passing heralded by periods of improvement followed by longer periods of deterioration and in the finish, by the willed cessation of her ventilator.

In the ICU that evening, at the appointed time, surrounded by her family, all of the alarms that had previously signalled challenges to her existence were muted and the mechanical exhaling hooshing sound that had always surrounded us when visiting her suddenly ceased. The noise was there one moment and then gone, a gossamer chord of that existence rendered. The moment was the "tocht na beatha", the silencing of life and in that instant the heat of her life also quickly evaporated, dissipating to leave only the cold silence behind and her journey’s end. 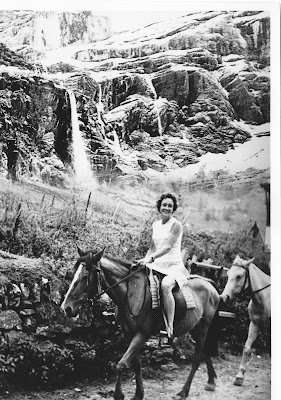 When I think of my mother I always think of the notion of gallivanting; my mother had an incurable sense of departure. Indeed my father would tease, and sometimes accuse, that Pam would spend the required amount of time getting to, and overcoming the difficulties of getting to, a place and then in no time at all put all her effort into getting out of it, often very shortly after she had arrived. It was the thrill of departure that excited her, the destination or indeed the return was somewhat irrelevant and one of her favourite words for this sense of wandering in herself or others was “gallivanting”. Its usage when applied to her friends was wistful and non-judgemental,

“I suppose he is off gallivanting somewhere.”

It implied an admired and sometimes wished-for shared wandering, a flight of exploration but also an encouragement. Courage mes amis, gallant mes amis. Her usage was romantic but gender neutral and when attached to a freedom of thought and action and an absence of malice, it engendered a sense of wellbeing, a sense of desire in both observer and participant. This notion of departure, this gallivanting was entirely liberating and could be towards a person or indeed a landscape. 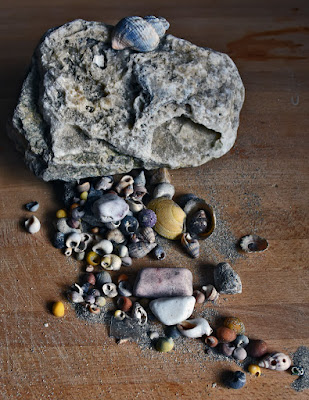 The sands of time from a Connemara beach

Gallivanting in my mother’s understanding was a “circular” journey. She knew that she or her friends would always return from a trip but it was the manner of the route to return rather than the actually getting back that mattered. My mother's essence could best be described, like Odysseus, as politropo. Odysseus took 10 years and Joyce’s Leopold one day to leave and return, secure in the knowledge that they would return to Ithaca and Eccles Street.  Homer awarded his hero’s foretold certainty of return by referring to Odysseus/Ulysses as polytropos, the many faceted man, wily and versatile. In traveller speak Odysseus was of the type who turned (tropos) his face towards adventure more often (poly) than not, striding out into unknown detours for the sheer excitement and occasional necessity of it. Knowing you will return from any journey makes that journey no less valuable. A change of your worldview, because you have perhaps circumnavigated it, is not inevitable but is a consequence of choice. 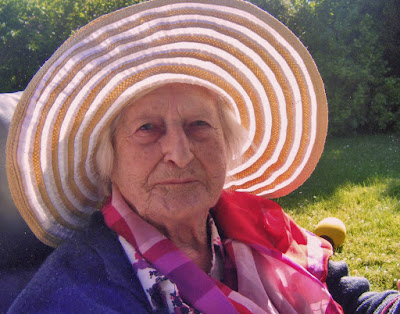 On the other hand, my late mother-in-law Catherine’s use of the word gallivanting was somewhat the opposite. It was more censorious:

“Ah! That will put an end to his gallivanting”;

said with slight relish as she referred to either illness or marriage (or variations on those themes) clipping the wings of her target gadfly. Gallivanting in her usage was also a gender-neutral activity but noticeably a far greater degree of opprobrium was often reserved for the female of the gallivanting kind, the falling  woman. Gallivanting in her mind was a terminal condition, a journey that was linear, predictable and that would change everything… before ending with a shuddering halt, with a denouement. Returning to Homer, Achilles journey to Troy was also foretold but his gallivanting was linear: he knew he would not be returning and once embarked was determined to make it as glorious a journey as he could.

While aimlessly surfing (a form of “lockdown” gallivanting) the Net recently I came across a perfume maker called Gallivant who produce fragrances for “Urban Explorers.” An advertiser’s algorithmic dream I ordered a “Nomad” box of small travelling spray bottles dedicated to different cities and am working my way through the scents dedicated to Berlin, Brooklyn, Istanbul, London, Tel Aviv and Tokyo; cities that are now also in lockdown leaving only echoes of their former selves. The scents are strong yet the differences are subtle: a top note here, a floral note there… although the difference between Berlin and Istanbul a little too subtle for my nose and my memories of those cities. 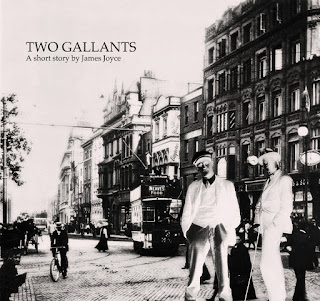 Gallivant derives from gallant and originally indicated the movement associated with the art of flirting, of wooing women. The meaning broadened to be understood as to be roaming about without a real plan. Gallant itself derives from the Old French galant, a word for courteous and a knightly virtue but it also means courageous. As a noun it is translated as one who woos women, a seducer. There is some evidence, however, that alternatively gallant and ultimately gallivanting derives from the German geil, a word for horny or lecherous. All of a sudden there is less troubadour and more of  a predator wandering about. This etymological juxtaposition of gallivanting ideals was brought to life by James Joyce’s short story “Two Gallants” where two, already old young men do their best to exploit the romantic attachment of a slavey, a housemaid, to one of them. While Corley departs to do the wooing, to undo the girl’s trust, Lenehan paces aimlessly back and forward across the city, stopping just once for a plate of peas, a so-called gallant gallivanting, but ultimately intending to be part of a plan to demean the girl by stealing from her or getting her to steal a gold coin from her employers. 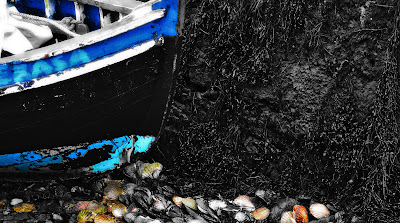 Currach and scallop shells at Sruthán Buí Leitir Mór
[Of note the Irish word "tocht" also refers to a cross board used for sitting on in a boat.]
see:
http://deworde.blogspot.com/2015/02/rihla-journey-47-quays-to-connemara.html

In these Covid times, these subterranean times, wandering aimlessly out-and-about, or gallivanting even, on the surface of the oikumenê has ceased and a previously indulged and mostly innocent pastime has become something far more sinister, far more dangerous, contrived and controlled. Thankfully even if there less gallivanting about there is far more gallant and courageous behaviour being shown by society in general but health workers in particular in dealing with the humanitarian crisis.

Like my mother and mother-in-law’s differing interpretation of the notion of, and indeed the language of gallivanting, the language and landscapes of our daily experience has changed. The pilgrimages have ceased: the circumambulation of the Haj, the scallop shelled trodden path of Sant Iago and detours to the local Holy Well. Exploration and religion have become virtual and philosophy turns to metaphors of movement and time travel. There is reassurance, however, in the fact that the sun still sets in the west and you can keep moving westwards in your virtual world towards that setting sun and still arrive to the east of from where you left. Journeys of your mind without a defined purpose but laden with the potential for continuous distraction and detour are like that. 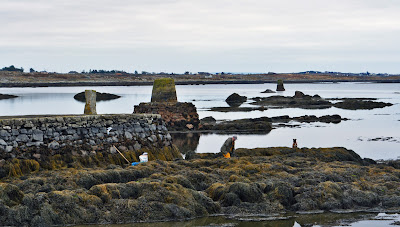