Rihla (Journey 4): Alamut – A Valley of Beauty and Death

This one is about Alamut, Iran. 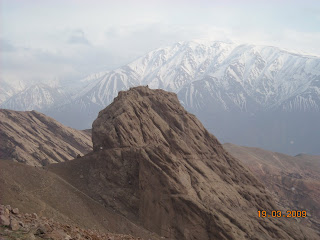 Alumut Fortress
'And he called it Aluh Amut, which in the Daylami language means the eagle's teaching.'
The Kamil fit-Tarikh of Ibn al-Athir
I have long had a fascination with the famed militant 11th Century Shiite Assassin sect (so-called by the Crusaders for the political murders they undertook and thought to be a derogatory derivative, used by their enemies, of the Arabic for hashish user, haššāšīn – for a presumed prerequisite ritual drug taken to embolden the work of the fedayeen operatives) and its’ headquarter mountain fortress in Alamut, Iran. The fortress is located at about 2100m on an isolated rock formation at the end of a beautiful narrow valley high above the town of Rudbar in the western mountain range of Gilan province in Iran. I travelled there on March 19, 2009 from Tehran, a journey made particularly long by the huge volume of traffic on the road to Qazvin caused by the mass exodus from Tehran of the No Ruz (New Year) holiday. Once there we stayed overnight in the very welcoming small hostel located in front of the Alamut research station.
The Alborz mountain ranges between Qazvin and the shores of the Caspian rise and fall in a sequence of peaks and valleys to heights of 4500 meters and in ancient times must have been some of the most isolated areas of Iran. Inhabited from about 2000BCE by an Iranian ethic group (they still speak Tati ) this particular area became the location for the Daylami people, part of the confederation of Gilan. These mountain tribesmen were always feared as warriors and were early converts to Shiite Zayid missionary zeal. A fortress was established about 84oCE and rebuilt about 860CE by Alid rulers. On the 4 September, 1090CE Hasan-I Sabbah, a Nizari (Ismaili) Shiite da’wa missionary, was secretly brought to the castle and ejected by subterfuge the castle ruler. He never left the castle again living piously and almost hermetically for thirty years. He concentrated his energies on intellectual studies and establishing the methodology and initiation of Assass (foundation) secret-society disciples to be a murderous thorn in the Sunni Seljuq political machinery who were bent on eradicating the Ismaili faith. Each operative would know their actions would almost certainly result in their own deaths, a form of suicide. One of their first victims was Nizam al-Mulk in 1092. 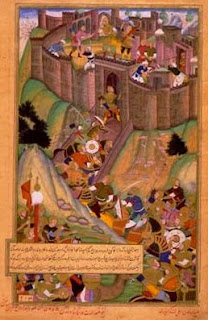 “Hulagu Khan went up to look at Alamut and from the greatness
of the mountain, astonished, he took the finger of surprise in his teeth,”
The fortress survived numerous attempts to be overwhelmed. Hasan was succeeded by seven more Lords of Alamut until the final Lord, Rukn al-Din b. Muhammed (1255-1256) surrendered the castle to Hulegu the Mongol (grandson of Jengiz Khan), in December 1256. The castle and its famous library was levelled and Rukn while on his way to negotiate with the Great Khan for the safety of its unique books was murdered. 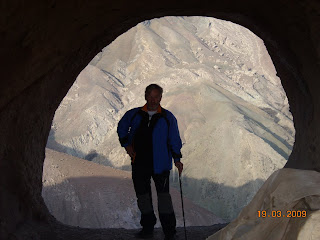 The castle is undergoing excavation and renovation but it is possible to examine the extensive remains of the main keep and library as well as the three very deep water cisterns that ensured the fortress could hold out under siege for a very long time. We watched the sun go down on a very still and magical day and the following morning while driving back through the valleys and mountain passes again I wondered at the physical effort required to organise and convert to a militant cause in such a geographically challenging environment. I was also struck by the similarity in militant missionary zeal, in such a beautiful yet deadly environment, of Hasan-I Sabbah and his Assassins and that of Maulana Fazullah and his murderous, Taliban supported jihadism in the Swat valley of Pakistan almost 1000 years later.
For a suicide-assassin of the 11th century substitute the suicide-bomber-assassin of the 21st. The beauty of these valleys of death are but a mirage.
Posted by Roger Derham at Thursday, April 02, 2009