PIRACY IN SOMALIA – FROM GABINIAN TO UN LAW 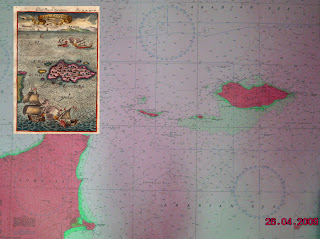 The word piracy comes to us from the Latin pirata, which has its own root in the Greek word for attack, peirao. Until the recent prominence given to the activities of the pirates off the Somalia Coast, the word conjured up notions of the romantic freebooting Caribbean buccaneers - from the French word boucan, a barbecue that the early Hispaniola settlers used to smoke the meat of wild pigs - portrayed by the classic Hollywood movies of the 1950’s. In reality, however, this notion of sea-going Robin Hood characters has its origin much further back in antiquity.
Records from the First Egyptian Dynasty (c.2600BCE) document forty ships leaving Byblos in Lebanon and bound for Egypt laden with cedar for Pharaoh Snefru’s building projects. They record that all efforts were taken by the Egyptian ships to sail in tight convoy so as to protect themselves from attack by Tyrrhenian pirates. A millennium later an Egyptian papyrus of the reign of Ramses XII(c.1100BCE) records the trouble that Wen-Amon - the royal architect who was also on his way to buy wood in Byblos - encountered with pirates from Thekel on the Syrian Coast.
Writing about 700 years later Thucydides - the Athenian Historian (c.455-c.400 BCE) - succinctly stated that from ancient times, as soon as sea-borne travel and commerce began, coastal communities encouraged their most powerful men to turn to piracy with a view ‘both to their own gain and to maintenance for the needy’ and that ‘this employment did not yet involve any disgrace, but rather brought with it somewhat of glory’. Greek legend had the figure of Nauplius whose profession was that of wrecker, slaver and pirate and it is this concept of trade in human cargo that was to encourage Mediterranean piracy for the best part of three thousand years. The increasing success and profitability of capture and ransom of people by pirates soon meant that the threat from the sea dominated the lives and architecture of the coastal communities. With the success came the concept of reprisal. Julius Caesar when taken by pirates at Pharmacussa was so indignant at his captors willingness to ransom him for the measly sum of twenty talents -they increased it later to fifty - that on release he pursued them relentlessly until the pirates were caught, had their throats cut and were nailed to a cross.
Caesar's was an individual response and the first organised attempt to rid the Mediterranean of its pirates was made in 67BCE when the Gabinian law was introduced. Pompeius was given pro-consular power over the whole of the Mediterranean and Black Sea for three years. He divided the territory into thirteen commands with two hundred and seventy ships and one hundred and twenty thousand men at his disposal. In a co-ordinated strategy he isolated all known pirate havens and driving the pirates landwards onto the waiting legions cleared the coasts in about forty days. With the demise of the Roman Empire piracy however soon made a comeback and very few states had a standing navy or army big enough to take on the task again.
Because of the logistics involved from earliest times smaller states began to licence ships to undertake reprisal raids on their behalf, particularly when their commerce was affected, and the distinction between these corsairs and pirates was merely a question of status. The granting of a letter of marque - a commission for extraordinary reprisals usually in time of war - to privateers and corsairs was a legally sanctioned weapon, which was not relinquished by the powers of Europe until 1856. The United States on March 3, 1815 the sanctioned the use of privateers in the US Congress passed act for the protection of the commerce of the United States against the Algerian Barbary pirates. (See Blog 5 Jan 2009) 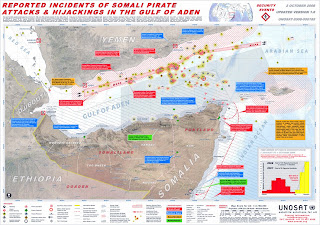 Because Somalia is in the midst of an ongoing enormous humanitarian crisis the distraction and impact of the piracy of its coast can no longer be tolerated by the international community. The other significant danger, sensed by the United States, is that the harnessing of Somalian piracy as a weapon of war in the region and not simply that of economic gain is even greater. A new fleet of modern-day privateers have been issued 'letters of marque' by the UN Security Council to deal with the problem. Unfortunately for all their efforts, as Rome experienced, the problem will not go away.
Posted by Roger Derham at Sunday, April 26, 2009