The recent release of the Ryan Commission to Inquire into Child Abuse Report (http://www.cori.ie/ExecutiveBoard/685-text-and-executive-summary-of-ryan-report) has precipitated an eruption of national condemnation concerning the Religious Orders and their acceptance, if not orchestration, of systematic physical and sexual abuse within the ‘educational’ institutions they ran in the name of God and, it must be said, a pliant Irish establishment. It also has created headlines in Australia, South Africa, the USA and Canada with these countries’ own collective memories of the physical and sexual abuse perpetrated by Irish missionary brothers, nuns and priests since the end of the 1940s.
Whereas once – at the end of the early medieval ‘pagan’ Dark Ages in Europe – Ireland’s missionary priests reintroduced Christian ideals into a continental consciousness; it seems now, that as a society for the past 70 years, we have encouraged the work of Irish missionary personal whose only ideal appears to have been a determination to re-establish a Dark Age, a perpetual darkness for the individuals victimized.
In a far too belated way the report has also vindicated the few, vilified brave individuals like Gerard Mannix Flynn who have campaigned for many years for an acknowledgement by our society of the brutality perpetrated within these institutions and for justice for the victims. 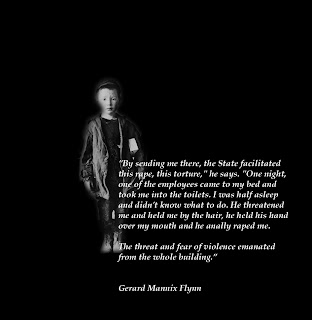 This quote appeared in an article by Brighid McLaughlin in the Sunday Independent newspaper on one of Ireland’s foremost writers and artist Gerard Mannix Flynn’s brutal memories of his time in Letterfrack Industrial School in Connemara, Ireland in the late 1960’s.
Mannix Flynn was sent to Letterfrack in 1968 at 11 years-of-age following what could only be called a ‘kangaroo court’ committal. That same summer, I was in the family car as we drove by Letterfrack while spending our summer holidays in the area. I remember my mother at a moment of desperation with misbehavior on my part begin to threaten me with,
‘I’ll leave you in there if you …..’
but then suddenly bite back on the words in regret.
I realize now that the memory of a monthly beating, in public, at her school in Roscrea by an eminent Jesuit priest, with the collusion of my grandfather had scarred her enormously. As children we were therefore fully aware – in the sense of the sanction involved – of the physical brutality associated with these schools (I also lived in Clonmel, Co. Tipperary for about six years, until the age of 12, and at the far end of the town was the Ferrybank Industrial School, another notorious institution mentioned in the report) but until about 2002 when Mannix Flynn’s play JamesX was performed had no idea of the extent of that brutality nor of the levels of sexual abuse perpetrated.
Letterfrack remained large in my consciousness. In October 2004 I went to see, at the Arsenale in Venice, Ireland’s entry for the Architecture Biennale. The theme of the Biennale that year was ‘Metamorphoses’ and Irelands entry was an interpretation by John Tuomey and Sheila O’Donnell, architects of Letterfrack’s transformation from a cursed institution to a world famous furniture and ceramic school. The transformation and interpretation had been prompted by a conversation concerning the school with Mannix Flynn by John Tuomey about 10 years earlier. 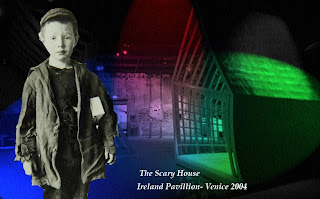 On entering the Irish Pavillion the first part of the installation was called the “Scary House”, a bare construction of angled wooden square frames that got smaller and smaller in diameter causing me to bend, touching out to feel the wooden ribs; like the ribs of Jonah’s whale, swallowing me. I retreated and did not follow the remainder of the installation to find ‘peace’ at the ‘Settled Bench’ but left by the end door into the light, to sit at the edge of a dock where Venice constructed its own means of imposing a Christian terror on the galley slaves of years goneby.
Reading the report on Letterfrack, and the layers of secrecy and collusion that allowed the abuse to flourish is heart-rendering, and a permanent indictment of the so-called works of God that have existed since Irish missionaries determined to extinguish the Dark Ages 1500 years ago.
Posted by Roger Derham at Sunday, May 31, 2009