The Simurgh and the Nightingale (Part 20) 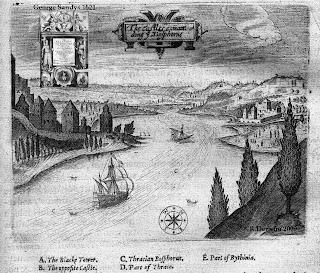 The long caigue with its' eight yedekdjis boatmen was making slow progress against the very strong current that swept the waters of Euxine around the promontory known to local fishermen as the Cape of Women. The name alluded to a fair Sultana drowned at this point when her boat was wrecked by the viscous swell. Although the journey distance of six miles from their embarkation at the arsenal on the Mamora shore of the city was not unduly long the effort of overcoming the current had fully exhausted the oarsmen. In addition, a strong southerly wind was getting up and its opposing force was whipping up the river surface and submerging the quay and jetty piles. High above them Rumelia Hissar – the Fortress of Europe – brooded with its' three massive towers.
As Catherine looked up at the south-eastern tower - its' conical wooden roof surmounted by green and blue banners - she nearly fell overboard as the boat thudded against the quayside. The helmsman was shouting out orders at the bowman who was having difficulty in securing the mooring lines on the wet wooden platform. Catherine slipped as she stepped over the gunwale but helped by Murad - who had insisted on accompanying her - regained her footing and soon reached the dry steps of a small kiosk perched beneath the walls.
From the castle gates a troop of soldiers were rushing to meet them. They wore green dolama coats over blue trousers and were armed with  saska sabres and large calibre snap-lock muskets with rounded shoulder butts. None were wearing bork caps and instead their heads were covered with tightly wound turbans. As they approached at speed Catherine remarked to Murad that they did not look like Janissaries.
He whispered in her ear. “You are right. They are kale azaps, volunteer Anatolian bachelors. This particular unit are known as the divanegan or madmen but are commanded by a Janissary corbasi from the fourteenth cemaat division. His name is Hosrev Beg and a more soulless man you are unlikely to meet. His sinecure here is a reward for his loyalty to the Sultan in suppressing other Janissary units. We will meet him soon enough.”
Catherine adjusted her veil to fully cover her face and they were escorted through the gates to the inner courtyard of the castle. As they did so she noticed the marble lintel stone with the Arabic letter mim engraved on it just above the gate. After climbing the interminable steps they reached the courtyard and were met there by a small man in an elaborate uniform and with a tightly curled moustache. He had trouble controlling his sneering welcome. “What brings the famous Black Murad Aga on a visit to my garrison to share my meagre pilaff? If I had known you were coming my mehterhane band would have been at the quayside.”
Murad bristled and touched the hilt of his sword briefly before deciding to ignore the sarcasm. “I am here to see your prisoner . . . the Patriarch Loukaris.”
Hosrev Beg eyed Catherine suspiciously. “And this woman?”
Catherine and Murad had already discussed a cover story. “She is the Patriarch’s niece and you will see from this passport issued by the azar basi she has permission to see him.” Murad proffered the sealed scroll and after allowing the garrison commander time to read it, snatched it back.
Hosrev Beg spat at the ground. “Very well then. But you’d better be quick and say your farewells. The Greek is to be executed at sunset. The order came through earlier today. Cavus!” He shouted at the nearby azap sergeant. “Show them to the prisoner.” Hosrev Beg smiled as he watched them being escorted away.
Catherine barely suppressed a gasp as she staggered and leant heavily against Murad. The cavus led them across the courtyard and down the steps towards the south-western tower. This had been built by the pasha Khalil and was known as the Tower of Blood. Here -Catherine knew - had been incarcerated the most important prisoners of the Sultan’s wrath, and she could feel the desperation of past agonies from the walls as they were led through a rat infested tunnel until eventually reaching a heavy wooden door. The iron bolt was pulled aside and Catherine went in. Murad remained in the corridor.
The cell was dark and dank and as Catherine lifted her veil it took some time for her eyes to adjust to the small amount of light coming from a slit sentry window high above her. She first heard the rasping cough and then saw the curled figure of a frail old man on a litter in the corner. She knelt by his side. “Patriarch Loukaris! What have they done to you? ”
The elderly man dressed in his simple monk’s habit struggled to sit up. His eyes lit up when he recognised his visitor. “Catherine my child. Thank you for coming.” By now she was crying and as he took her hands in his, he could feel Catherine shuddering when she felt the cold clamminess of his skin. “Stop that my daughter. I am an old man and your tears will break what brittle sinews I have left.”
It took Catherine some time to compose herself before she could tell Loukaris of the execution order. He appeared calm indeed almost relieved. 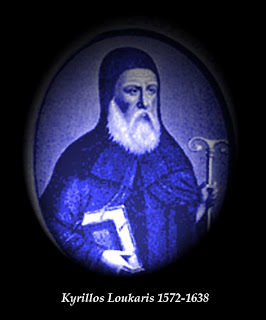