This one is about Tabriz, Iran. 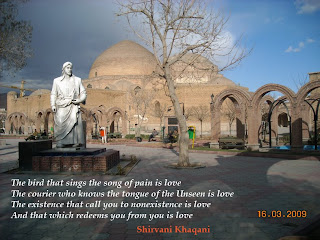 My heart and thoughts are with friends in Iran, who at this moment in their history have such an overwhelming desire for democracy, for freedom from a suffocating theocracy, that I have real concerns that the bloodshed will exceed that of the ’79 revolution.
In March of this year I wandered across Khaqani gardens in Tabriz, from the Blue Mosque to the Azarbayjan Museum. Shirvani Khaqani, a 12th Century Azeri poet in Northern Iran, wrote one of the most powerful jail ballads – Habsiyah – ever penned while incarcerated for five years. He was known originally as the ‘seeker of truth’ and today that truth is further away than ever.
Ahmadinejad’s Ayatollah Khamenei-sanctioned crackdown of democratic protest utilizing the revolutionary paramilitary guards and religious police (know sarcastically as the ‘fun’ police in Teheran) in support of an elitist regime that has lost the confidence of the people is but that of a failing purpose flailing out. 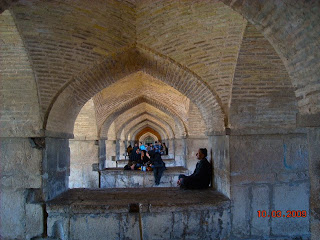 The present democracy demonstrations have been called ‘The Twitter Revolution’ because despite attempts by authorities to suppress in a vacuum its lifeblood is being maintained nationally and internationally by modern communication methods.

The immediate danger is that that lifeblood will ebb away by the continued use of brutality, imprisonment and murder. 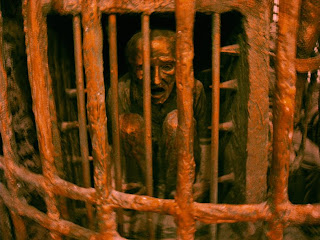 Once across the Khaqani gardens I entered the Azarbayjan Museum and went downstairs to see the enormously powerful sculptures of Ahad Hossein. If the regime in Qom want to see the imprint of what they hope to achieve with the brutality they only have to take a moment to reflect on these sculptures.
Oscar Wilde, an Irish poet, wrote another powerful jail ballad, The Ballad of Reading Gaol. One of the repeating verses states,
I never saw sad men who looked
With such a wistful eye
Upon that little tent of blue
We prisoners called the sky,
And at every careless cloud that passed
In happy freedom by.
Let us not be careless. Let not the careless cloud of freedom pass by for Iran!
Posted by Roger Derham at Sunday, June 21, 2009