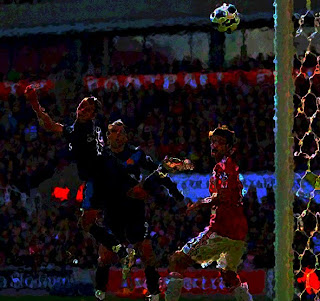 Perhaps the best of songs heard, or of any and all true love, or life's fairest episodes, or sailors', soldiers' trying scenes on land or sea, is the résumé of them, or any of them, long afterwards, looking at the actualities away back past, with all their practical excitations gone. How the soul loves to float amid such reminiscences!

The woven images of an August evening in Tanzania of more than thirty years ago loom in front of me. I say woven, because sometimes, old memories overlap each other, become a résumé. It is not done to deceive but more to remind, in a tactile sense, of the patterns of effect.

There we were, in a battered Bedford truck, with its recently repaired chassis of reinforced concrete, winding our way back up the escarpment road. Behind us, the red dust spewed, to settle on pointed sisal plants. Behind us also, I hoped, were the night-hunters of the Serengeti, panting for the rains, a quick African sunset...a quick kill.

Our football team, with a conveniently epileptic goalkeeper, and polygamous striker were in great spirits. We – they – had beaten the bullying, braggart, bucks of Babati for the first time in ten years. Nothing in the shared memories of the team could touch the joy they felt at that moment.

Father Louis, the priest and coach, with the jet-black skin of his tribe and the Tipperary accent of the Palatine’s began the chant. It was the primitive sound of the nearby gorges: Oldevai, the birthplace of mankind … and strangely also of Benedictine Rome. Perhaps not so surprising for Fr Louis had spent seven years in the Eternal City infusing doctrine and incantation. But this sound was, more eternal still and I listened to the echo from the truck’s canvas walls and the night outside.

A second voice joined in, deep bass like the thunder that often rolled in the twilight across the plains below. I looked along the line of grinning faces. It was the silent member of our team; never a word out of him! And now his voice! It captured the chant to its loom, like a man’s footprint on the earth. It grew louder and louder before suddenly stopping and then began again. This time softer, anger spent, waiting.

The others then joined in with a melody that silk-spun a pattern between in the weave of chant and bass. By now, the night and the cold air had drawn in and the song’s cloth warmed us before drifting upwards towards the stars and the horizons of their lives.

I listened. I did not understand the individual words, or the imitations of nature that they held within them. But, that did not matter. In the music of the language of the escarpment, I could sense the ideas of joy and celebration and felt warm in the shared nurture and shared experience of our victory.