Ireland’s Sisyphean Crisis: Caught Between a Rock and a Hard Place 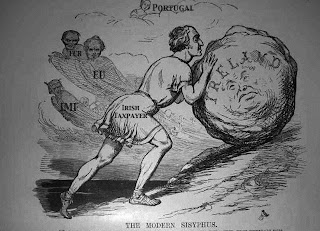 Between a Rock and a Hard Place
(adapted from Punch Cartoon, March 1844)
The first time a whole nation completely imploded financially as a result of the unbridled speculation on a commodity was in February 1637 in Holland. It must be noted that in 1637 the concept of a ‘Nation’ was a relatively new one but in the Dutch case it concerned an overestimation of the worth of tulips, a flower; in Ireland’s case the bursting ‘bubble’ of 2010 is the result of an almost universal delusional estimation of the value of property and land allied to a fraudulent lack of regulatory control. Both of these bubble bursts came at the end of each country’s so-called Golden Age where the true value of tulips or land became unhinged from their real or logical intrinsic worth.
And now the crisis!
Ireland Inc. to get its house in order, to protect the deposits in national banks of all its taxpayers, has to sacrifice its financial autonomy in order to survive. It is caught between a rock and a hard place. Go with the International Monetary Fund and close the ‘Double Ireland’ taxation-avoidance ploys available to multinational corporations based here or go with the EU Stability Fund and remove the favourable basic corporate taxation rates that attracted those companies to Ireland in the first place. Either way the EU, who suddenly appears reticent to remember its proprietary gloating – and lack of regulatory intercession – over Ireland Inc.’s ‘European’ success during the Golden Age of the 1990s, is now determined to remove the ‘Irish’ virus ( it was a Tulip mosaic virus in the 1630s in Holland which was responsible for creating the most sought-after varieties) from infecting Portugal, Spain and others.
Sisyphus in Greek mythology – like Ireland in our own modern mythology – was considered the craftiest and most devious of men. Punished for his mortal hubris by being forced to push for eternity a boulder from the realm of men to the realm of the Gods he nearly makes it only for the boulder, at the extreme of his ambition, to roll back down again.
Time will tell whether Ireland Inc’s punishment will last as long. 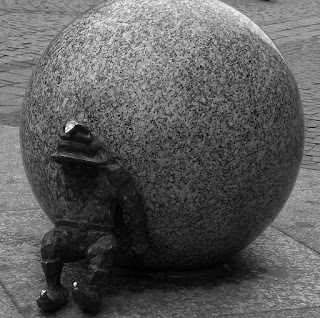 Many mortals will certainly be crushed by the recoiling boulder.
Posted by Roger Derham at Tuesday, November 16, 2010