This rihla is about Allihies, Beara Peninsula, West Cork, Ireland. 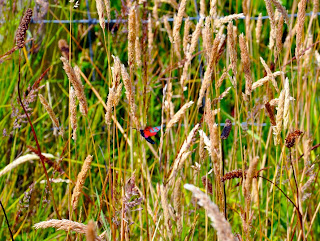 All journeys are metaphors for existence, and I hope any accidental tourist reading this, will forgive me, if this journey meanders more than most, particularly as I want to start with Kierkegaard. As the first and most accessible of the existentialist philosophers Kierkegaard has always been my favourite, primarily because of his humour, but also his “subjectivity is truth, subjectivity is reality” absurdist analysis of the human condition. He explained in his book Concluding Unscientific (uvidenskabelig) Postscript that if a subjective thinker applied ‘qualitative disjunction’ in ‘empty isolation’, or in ‘an altogether abstract fashion’ then one was at risk of saying something infinitely decisive, being quite correct in what one said, but ‘ludicrously’ saying nothing at all.

Now I am a lazy ‘subjective thinker’ and often anything I write is more the consequence of an inquisitive distraction rather than the discipline of applied disjunction. However that said, and at the risk of saying nothing at all, I thought I would recount a recent journey where the absurd and the abstract conjoined. 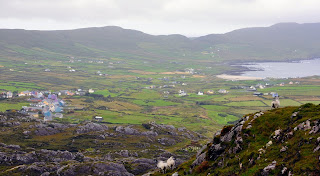 In recent years, during the first week of August, I have headed for Allihies, on the Beara Peninsula, in West Cork. Last week, leaving behind the violent headlines of a Norwegian Aryan slaughtering innocents, and the notion that the civilised remit of Norwegian society (unless you are a whale of course) is fully funded by its North Sea oil revenues for the next 150 years; and elsewhere in the world the physical slaughter and economic devastation of the Great Wars being replaced by the economic devastation caused by a reliance on an imaginary sense of worth, of gold, of money, of redeemable bonds, and electronic gambles on their absurdist reality; and the price of a litre of petrol varying from county to county and from one side of a town to the other, I made that disjunctive leap accompanied for reading by Simon Sebag Montefiore’s brilliant Jerusalem – The Biography, an eloquent testimony to all that is absurd. 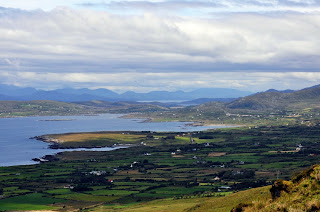 On a sun splashed afternoon having climbed the road from the multi-hued village of Allihies that twists up through the 19th century copper mine workings that are themselves descendent of Bronze Age workings in the same area, through fuschia and heather bog I descended again to the flatlands below the Slieve Miskish mountain ridge that bisects the landscape. Behind me was Knocknagallaun, the Hill of the Standing Stones, the megalithic standing stones of the northern shore below that acted like waymarkers to the less-hued village of Eyeries. 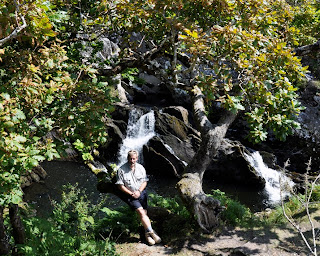 
A little beyond Eyeries, near St Catherine’s Point is a small ruined church named dedicated to St Caitiarin ( a male saint) and within its precincts are tombstones of copper miners from Allihies who had emigrated when the seams exhausted to Butte, Montana. 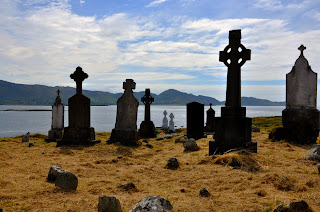 Near the church is a small outcrop of rock with a whitewashed crown and covered with votive offerings such as money, a rope, a letter, a comb, a crucifix, a fishing hook and a child’s bracelet. The rock is known as the An Chailleach Bhéarra, or the Hag of Beara. The Hag or Old Crone is one of Ireland’s most ancient deities, preceding the Nemed, Fintan the Wise, the Fir Bolg and the Tuatha De Danann in mythology. It was she who ate the apples of immortality in the beginning, could regenerate into a beautiful woman with the love of a hero, and became the Goddess of the Winter. She was also, in Beara folklore, married to Manannán Mac Lir, God of the Sea, guardian of Emhain Abhlach, the Isle of Apple Trees. And she waits there, frozen in space and time by an early Christian antagonism. 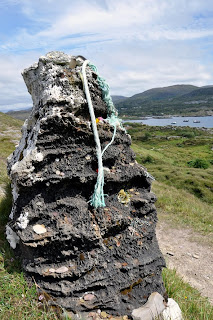 The Hag of Beara with Votive Offerings

I sat there and thought pagan thoughts. I also thought (excuse me as this is where my arbitrary distraction intrudes) of the death of Otto von Habsburg-Lothringen the last of the Imperial Hapsburgs in July of this year. Among Otto’s many titles was that of Lord of Trieste, Kotor and Windic March and Duke of Dubrovnik (obtained via Dubrovnik’s allegiance to the Hungarian Crown). While once in Trieste I followed James Joyce’s trail of unpaid rents (via San Nicolò 30, 2nd floor 1° May 1905 - 24 February 1906; via San Nicolò 16, c/o Stanislaus Joyce (his brother), 3rd floor March - November 1907; piazza Ponterosso 3, 3rd floor March 1905; via Santa Caterina 1, 1 st floor 1° December 1907 - early March 1909; via Armando Diaz 2, 3rd floor mid-October 1919 - early July 1920; via Donato Bramante 4,2nd floor  September 1912 - 28 June 1915; via Alfredo Oriani 2, 3rd floor late August 1910 - early September 1912 ; via Vincenzo Scussa 8, 1 st floor 6, March 1909 - 24August 1910 ; via Giovanni Boccaccio 1, 2nd floor  24 February - 30 July 1906) – for the majority of the time that Joyce lived there Trieste, until 1918, was still part of the Austro-Hungarian Empire) and then went to Miramar, the Hapsburg Imperial Residence from where Otto’s relative Maximilian sailed off to become and be executed as Emperor of Mexico, in June 1867. And touching the rock I thought of the Hag, and the notion of ancient curses and the island of Lokum near Dubrovnik where Maximilian and his wife Charlotte had built a pleasure palace; where when I was last there still had the Imperial arms of Mexico on the shelled-out boathouse, and which had a Benedictine curse on whoever claimed the island for his personal use.

And how this reality was all so absurd. 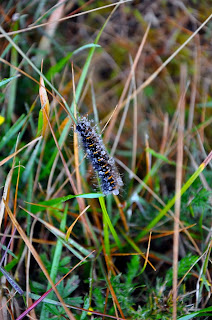 On returning to Knocknagullaun, on a patch of heather I photographed a dew-laden hairy orange-striped caterpillar. I think it was the larvae of the silken Emperor Moth and I thought of Maximillian again, and again of the Hag and of historical certainty re-inventing itself.

I suppose the least likely words, given an opportunity to express them with clarity, that the great existentialist philosophers would have uttered on their deathbeds, would have been, ‘I have great thoughts. I will come back to them again at another time.’ 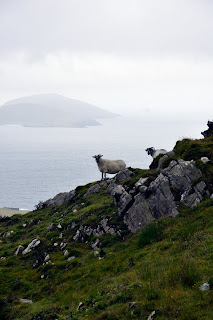 A never-ending journey this saying nothing at all!
Posted by Roger Derham at Monday, August 08, 2011