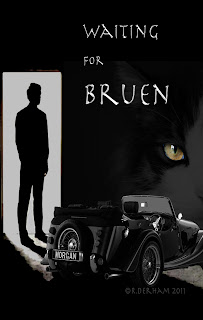 He turns off the ignition and waits.
Checks his watch.
Ten, fifteen, twenty minutes pass.
He checks his phone.
No signal.
He steps out.
Horizontal rain.
Cutting.
Nobody about.
Sees his reflection in the side-mirror.
He is no picture.
Dirty crumpled coat like Columbo used to wear.
And the smell and taste of cheap cigars.
Too many days like this, he thinks.
Though half-closed eyes he walks toward
a battered lock-up door stained by graffiti and urine;
half-open.
He calls out.
Silence.
He hesitates then pushes the door.
Scraping sound.
Pitch-black within and a cat-piss smell.
Steps in stagnant water, searching for a switch.
Strange crackling sound and a faint thrill in his finger.
He jumps out of the water suddenly afraid.
The light flickers:
a single bulb with a jaundiced glow.
His eyes adjust.
One wall stacked with books:
stratified.
A mausoleum, he thinks.
He touches the shroud.
A puffball cloud of dust rises leaving his handprint.
He coughs.
There is a noise in the darkness beyond.
He reaches out.
Chooses a book as a weapon.
Hardcover, sharp edges.
There is a sudden crash and a spitting sound.
He jumps again and just misses a cat; a black mangy cat with three legs moving fast past him.
He calls out again.
Silence.
He looks at the book in his hand.
Oxford University Press: Decanting Kant – The Metaphysics of Pleasure.
He leaves it down.
Edging along the wall he goes deeper.
A different smell intrudes: putrefaction.
His stomach turns and neck-hairs bristle.
He steps in another pool.
Sticky.
Lifts his shoe to see.
Dark red liquid stains the sole.
He feels the air evaporate and pants.
Pulls out a lighter.
Unsteady hands.
Follows the trail of fluid.
Overturned can of paint and a dead rat:
Eviscerated, maggot-ridden.
He calls out again.
Graveyard quiet.
He stands at the back wall, jammed.
He covers his mouth and nose with a linen handkerchief.
He pulls at the shroud.
A dust-storm envelops him;
driven inwards by the wind.
He coughs again and waits for the dust to settle.
He looks.
Racing green on blocks, pristine:
an old Morgan.
Beautiful, he thinks and the light-bulb blows.
Shit, he says.
Has to feel his way past the car and books.
He stops with a start.
In the doorway, in what light there is, a man is standing.
Thin, angular, white-haired:
haloed like an angel.
Holding the cat.
Stroking the place where the missing leg should have been.
You Bruen, he croaks.
Yeah. Are you interested?
Maybe!
© R.Derham 2011
Note: This piece was originally submitted by e-mail on the 27 November 2011 for the FlashFiction section for a work less than 500 words in the Irish Times newspaper. I have not heard back from them or even whether it was ever received.It is dedicated to my friend Ken Bruen, crime writer and metaphysician.
Posted by Roger Derham at Sunday, December 11, 2011