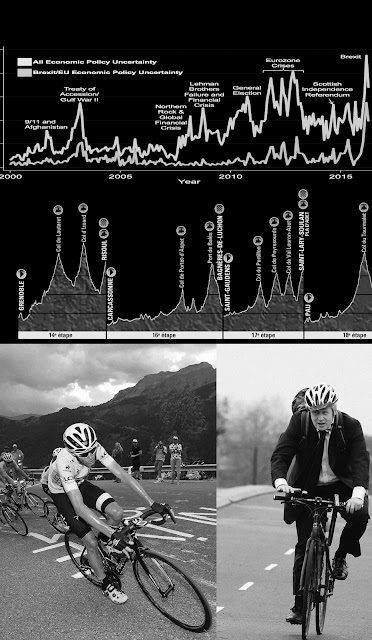 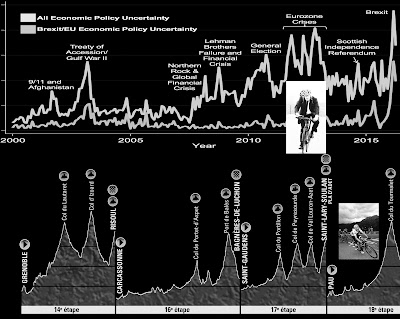 I was somehow taken with the similarity of profiles used to illustrate the peaks and troughs of the stages of the Tour de France (those used in the illustration are from a previous year's "clockwise" Tour as the famous Pyrenean Pau to the Col du Tourmalet is the 8th stage in this year's "anti-clockwise" Tour) and some of the economic indices documenting the "uncertainty" effect of Brexit, or as I will refer to it in this July week, Le Détour de Grande Bretagne. The Tour and professional cycling in general has been plagued by the uncertainty of both human and mechanical doping but that said the it holds an enormous fascination and is one of the supreme sporting events. The economic uncertainty is also equally fascinating, but also a product of possible human and mechanical doping or tampering. Having reached the Col du Tourmalet in metaphorical economic terms there is a sense of suspended reality before those individuals who are good 'descenders' in the market-place take advantage.

P.S. The day after! Boy didn't Chris Froome the "Descender" take advantage in a completely unexpected and unplanned attack after the last summit of the day. Sitting astride his crossbar, head down aerodynamically he managed in that position to continue pushing the pedals, not something often seen or even attempted. It was an incredible achievement,  particularly when done at speeds that sometimes reached 90km/hr. Afterwards when asked about what he had done he said "it was fun", akin to his 12 year-old self crashing down a mountain path in Africa with no concerns about personal safety. It somehow restored a sense of belief in the ability of a sporting moment to transcend all scepticism. I am not entirely certain whether the economic "descenders" will have the same sense of fun as they plunder an advantage.