The Simurgh and the Nightingale (Part 12) 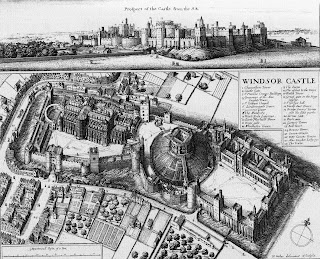 The Knights had all gathered, as directed, at the Hour of Tierce on this the eve of the prorogued Grand Feast of the Order of the Garter. Dressed in full regalia they greeted each other in the Prive-Chamber of Charles the Ist, King of England. In silence thereafter they waited for the king to complete his robing. They watched as he positioned the eponymous Garter with its motto of HONI SOIT QVI MAL Y PENSE - shame on him who thinks ill of it - composed of over four hundred diamonds, a little below his left knee. Charles appeared agitated as he then stood upright to allow a servant place a surcoat of crimson cloth - which was lined with white taffeta - around his shoulders. His attendants then brought forward and placed about his neck the blue silk ribband to which was attached the gold mounted medal known as the lesser George. It had been cut in onyx and sparkled with numerous diamonds. This was then followed by the great purple velvet mantle with its arms of Saint George set within an embroidered Order of the Garter ensigna on the left shoulder. The large terminal knots of the Venetian gold and silk robe-strings attached to the collar nearly reached the ground. Finally the large gold collar with the heavily jewelled depiction of Saint George killing the dragon dangling from its middle - this was known as the greater George - was brought out and placed about his shoulders. 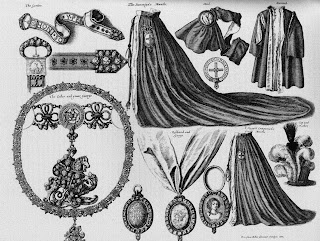 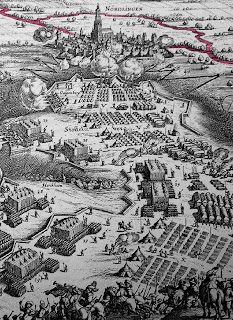