Publish and be damned

A number of years ago I gave a lecture to the Geneva Writers Conference on the the trials and tribulations of being a small publisher. I realise now that although my remarks drew some amused applause I really was not the type of publisher that aspiring authors would aspire to. Certainly not from the prospect of earning serious money from their work. That said I am posting the lecture as I gave it.
Publishing in General
“The pursuit of the ethical imperative is the hallmark of authentic publishing.”
This was the opening line of an article written in 1997 by Richard Abel, of Timber and Amadeus Press, which distinguished, in very Kantian terms, between the mind-set of a “professional” and a “careerist” publisher, with the “professional” publisher, not entirely disregarding the practicalities of earning a living, being required, as other professions are, to an upholding of an ethical commitment to both the authors and readers he/she serves, and to a maintenance of intellectual rigour and examination within the profession itself for the greater good of our culture and society.
If only it was as easy as that!
One man’s ethical imperative is another’s empowerment and yet another’s oppression. In a truly free society distinguishing between the vanity of “careerists” and the validity of “professionals” is an oxymoronic exercise. The truth is somewhere in between, or nowhere; an utopian ideal. Nobody is perfect; blonde careerists and Hugh Hefner have more fun; and authentic, ethical publishing is a self-inflicted wound.
There are some important points to be made however, concerning the “profession” of publishing. In the present – and the foreseeable future – the nature of communication of ideas becomes increasingly digitalised, making copyright a logistic nightmare, but allowing communication of those ideas, books, etc to be beyond editorial, critical, or market-place control. This may seem like the ultimate freedom but in time it will be realised that every digital transmission leaves an electronic fingerprint, a fingerprint that will ultimately entrap us within an electronic web: Michel Foucault’s Grid. Books, bound pages of paper, will, as they always have, provide the only means to escape that electronic censorship, even if that paper is primarily made from the patented sugars of eucalyptus pulp.
Myself!
Returning to the theme of flagellation, I was drawn to publishing for selfish, self-indulgent reasons. I love books; I love the feel and smell of books (“careerists”, it is claimed, like the feel and smell of authors); I love the journey to mystical isles that each book takes me on; and I love being part, in some small way, in the legacy of human intellectual achievement and its brightest flowering in art of writing. Books are my true freedom.
Friends, on the other hand, will tell you I went into publishing to fill a void in my life. Up to five years ago I was both an Obstetrician and Gynaecologist but I ceased doing the Obstetric component of my practice in order to have time to write – and get more sleep. For two years I was content but then began to miss the buzz, the adrenaline rush, the amazement of delivering a newborn child. Where should I turn to fill this void? To the most fecund group of all, of course: Writers! Their progeny (60% manuscript and 40% womanuscript to our company at present) are precious, often have a difficult pregnancy, occasionally are abortive, but in their delivery, be it with aid of an editorial scalpel, or with encouragement alone, the midwife in me takes enormous delight in their entry into the world. 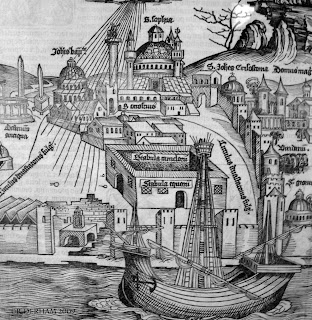 On one wall of the room in which I do most of my work is a framed original page from the Nuremberg Chronicle, published in 1493 as the Liber Chronicarum by Hartmann Schedel, also a physician. The recto has a wood cut illustration by Michael Wohlgemut – Dürer’s tutor – of Constantinople in the midst of a terrible storm in 1490. It is a very Christian view of a city that had fallen to the Ottomans under Mehmed II – Fatih the Conqueror – in 1453. This particular book is applauded as being the first, secular printed encyclopaedia of knowledge and yet lambasted by later critics for its depiction of monsters, putative devils, and the quality of some of the 2000 woodcuts. That same year, in 1493, The Four Columns, a book of Jewish law printed in Hebrew in Istanbul, by Davis and Samuel Nahamias, was the first printed book published in the Ottoman empire to much consternation because of the fears printing would have on the industry and art of Turkish calligraphy and the written word. These fears were played upon and the nascent printing industry quickly suppressed and not re-established there until the 18th Century.
The history of the written word, the printed word, and increasingly the digitalised word is replete with the suspicion that those words can provoke. For my part I love the fact that the Nuremburg Chronicle devoted four or five pages to the depiction of monsters: as all good books should do: the terra incognito of their author’s perception.
The Alchemy of Publishing
“Alchemy provides the psychology of the unconscious with a meaningful historical basis.”
– C. G. Jung
The Novel?
“...one could write a history of the death of the novel as long and rich as that of its lifetime.”
– Peter Schneck (Pop Goes the Novel)
“By this means of seminal propagation, there remains in the children what has perished in the parents . . .”
– Francois Rabelais (Gargantua and Pantagruel)
The Writers?
“It’s the job of fiction to be believable because life is so often unbelievable.”
– John McGahern
“I took up writing for the simple reason that it’s easier than house-painting.”
– Brendan Behan
“Writing is really about the special relationship that exists between the reader and writer. The whole industry of literature, the hype and so on, isn’t really important. All that’s important is the writer’s influence on the solitary – and potentially subversive – reader. Once a book is written it belongs to the reader. All the writer can do is bow."
– John McGahern
The Publisher?
“Publishers do not exist unless they are sleeping with their authors, holding back on royalties, or generally interfering with the business of writing.”
– Anon
“When it comes to misunderstandings, most publishers will split the blame: half the author’s fault, and half his or her agent’s!”
– Anon
What do I look for?
The ideal:
The manuscript or womanuscript that will become a “classic”, and have a life and value far beyond the author’s and publisher’s.
The real:
1. Writing that takes me to the edge of my perception: my notions of good and evil, beauty and ugliness, sanity and insanity, truth and untruth (and that’s just the memorandum of agreement!).
2. Well honed craft and presentation: less editing, less expense, less conflict. (to be honest).
3. Obvious co-operation in what is an association (in cahoots even), not a baby-sitting service.
4. Enjoyment, mutual.
5. An intellectual challenge (equates in equal amounts, usually, to the commercial challenge thereafter of placing the book!).
6. A sense of quiet satisfaction (occasional smugness is acceptable) with a job well done.
7. A recognition that artistic risk and economic risk are generally uneasy bedfellows however good the loving.
8. The relationship of a writer to his/her publisher is akin to that of an adolescent male to his father. (enough said!)
9. . . . blank ( a rare admission in a publisher, who normally have all the answers)
Posted by Roger Derham at Wednesday, February 04, 2009